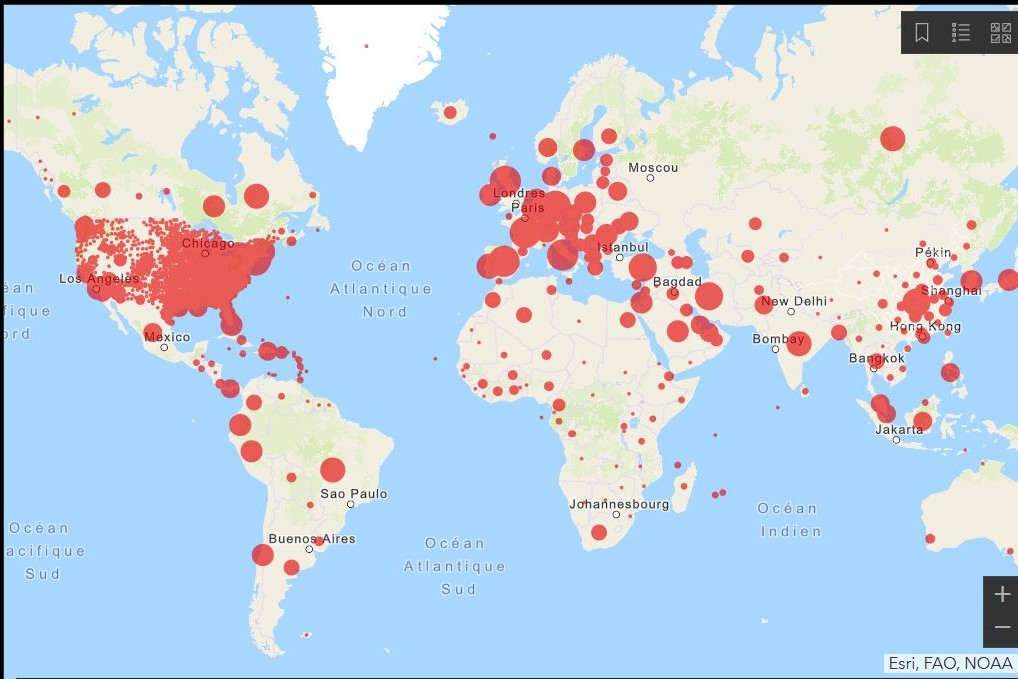 Preamble: In view of the incomplete information reported by the health authorities of many States due to the “Sunday break”, the status update of 20 April 00:00 GMT will not be carried out. The next situation report will be that of 21 April at 00:00 GMT.

It should be noted that

– 5,753 of the 6,505 deaths reported yesterday (88.6%) are “US, EU, NATO”. It is this camp that will pay the highest price both in human and economic terms (inevitable recession, possible economic crisis).

Globally, the number of new cases and deaths of the day is declining. The latter is expected every weekend (Sunday break effect and less information on the declarations made by the health authorities of certain States). A “catch-up” is generally recorded in Tuesday’s reports at 0:00 GMT. The milestone of 2.5 million cases and 175,000 deaths is expected to be passed in the report on Tuesday 21 April at 00:00 GMT.
Yesterday’s heaviest death toll figures were from the U.S., France and the U.K. The U.S., France and the U.K. were the biggest contributors to yesterday’s figures. These three countries together accounted for 47.2% of new cases, 52.2% of new deaths and 37.9% of the world’s critical cases.
A table of the current balance sheet of the number of cases and deaths by major regions of the world makes it possible to see which are doing well, for the moment, and which have suffered and continue to suffer.

Asia, with the exception of Iran, has virtually emerged from the epidemic. Its share in the balance sheet will therefore gradually decline. The share of the American continent (North and South) will gradually increase.

To put the human toll of this pandemic into perspective, the World Health Organization (WHO) tells us that, each year, seasonal flu is responsible for 5 million “serious” cases, resulting in between 280,000 and 600,000 deaths. To date, Covid-19 has only affected 2.33 million people (tested), including nearly 330,000 serious cases resulting in nearly 161,000 deaths.

Let’s look at the situation country by country

The situation in the USA seems to be stabilising. However, the “Sunday break” effect observed each week does not make it possible to assess the real US situation of the day. The 43,000 death toll will be crossed in the April 21 report.
The situation in France is beginning to improve with a drop in critical cases and deaths. The significant increase in the number of new cases reported is linked to the increase in the number of tests, which is a good sign because it allows us to better know the carriers of the virus (healthy or not) and to isolate them in order to limit the spread. The “German-style” test strategy, adopted a little late, will certainly help France to get out of the situation. The number of daily deaths, linked to the number of patients in intensive care, should gradually decrease. The unfortunate episode on the aircraft carrier should not result in too heavy a toll given the age and shape of the sailors affected, the vast majority of whom are healthy carriers.
The situation in the United Kingdom appears to be stable as far as can be judged. The critical cases counter has been stuck at 1,559 for more than ten days. The number of patients treated continues to rise (+4,630 yesterday). The number of daily deaths is expected to remain in the range of 700 to 1000 in the coming days. Hospital structures are under increasing pressure.
The situation in Italy is slowly improving, with a stabilisation of new cases and a decrease in critical cases and deaths. The number of deaths today has fallen below 500.
The situation in Spain is still struggling to improve. The number of critical cases is still not decreasing and therefore carries the seeds of daily losses of 500-700 in the coming days.
The situation in Germany is improving significantly: more cures than new cases, a significant drop in deaths, critical cases and the number of patients under treatment. Germany is thus clearly heading towards the end of an epidemic that it will have perfectly controlled from start to finish, without ever reaching saturation of its hospital capacities. Germany entered the epidemic at the same time as France, and will begin a gradual deconfinement as of tomorrow, April 20, three weeks ahead of our country and with a loss rate per million inhabitants nearly six times lower than ours.

The effectiveness of the tests

These data are very interesting, especially since the number of cases detected across the Rhine has been close to ours. Only permanent anticipation, a solid hospital structure with the necessary means at the right time and, of course, the massive tests applied from the very first days made it possible to contain, and then roll back, the epidemic. These tests made it possible to detect healthy carriers of Covid-19 and to confine them to prevent the spread of the epidemic. They also made it possible to detect and treat patients who needed to be detected and treated earlier, before their condition deteriorated and made treatment much more complicated.
The Germans cured 2.2 times as many patients as we did because they detected and treated them earlier and therefore faster. This German strategy was the one advocated by Professor Raoult. The French executive and its “scientific council” chose another one by trying to manage the shortage of means (masks, respirators) and by deliberately ignoring for too long the capacity of veterinary laboratories to test massively the main infection foci.
The situation in Turkey appears to be improving, while Canada’s situation appears to be stabilizing.
The situations in Belgium, Switzerland and Brazil are stable, that of Iran is slightly improving and that of Russia is deteriorating very slightly. While the losses remain very high for a small country like Belgium and significant for Switzerland, they remain low for Brazil and Iran and very low for Russia.
Although little affected by the epidemic, Russia is testing its population extensively (as Germany has done) in order to take the necessary selective containment or treatment measures as soon as possible. This explains the large number of new cases detected. It is clear that states that test little, detect little and allow the epidemic to spread further.
Russia, on the other hand, is in a constant state of anticipation. It has been able to cancel or postpone major events for the country as part of an exemplary prevention strategy: the vote in the constitutional referendum that was due to take place on 22 April was postponed from 25 March to a later date. An international conference on security that was to be held in the second half of April was cancelled in early March. Above all, the celebration commemorating the 75th anniversary of the victory over Nazism, which was to have taken place on 9 May, was also postponed indefinitely.
These decisions of Russian governance obviously contrast with the unfortunate decision taken by the French executive, after advice from its “scientific council”, to maintain the municipal elections last March … No one will ever know the number of deaths directly linked to this decision.
The situation in Sweden is stable: it is still seeking group immunity.
All the situations observed today must be taken with caution because of the “Sunday break” effect. Catch-up data will certainly be observed in the report of 21 April 0:00 GMT.
The mortality rates per million inhabitants of the 15 countries with more than 1000 deaths (+ Russia) give a small idea of the quality of the management of the epidemic by the governments of each of the states. The ranking is today as follows: