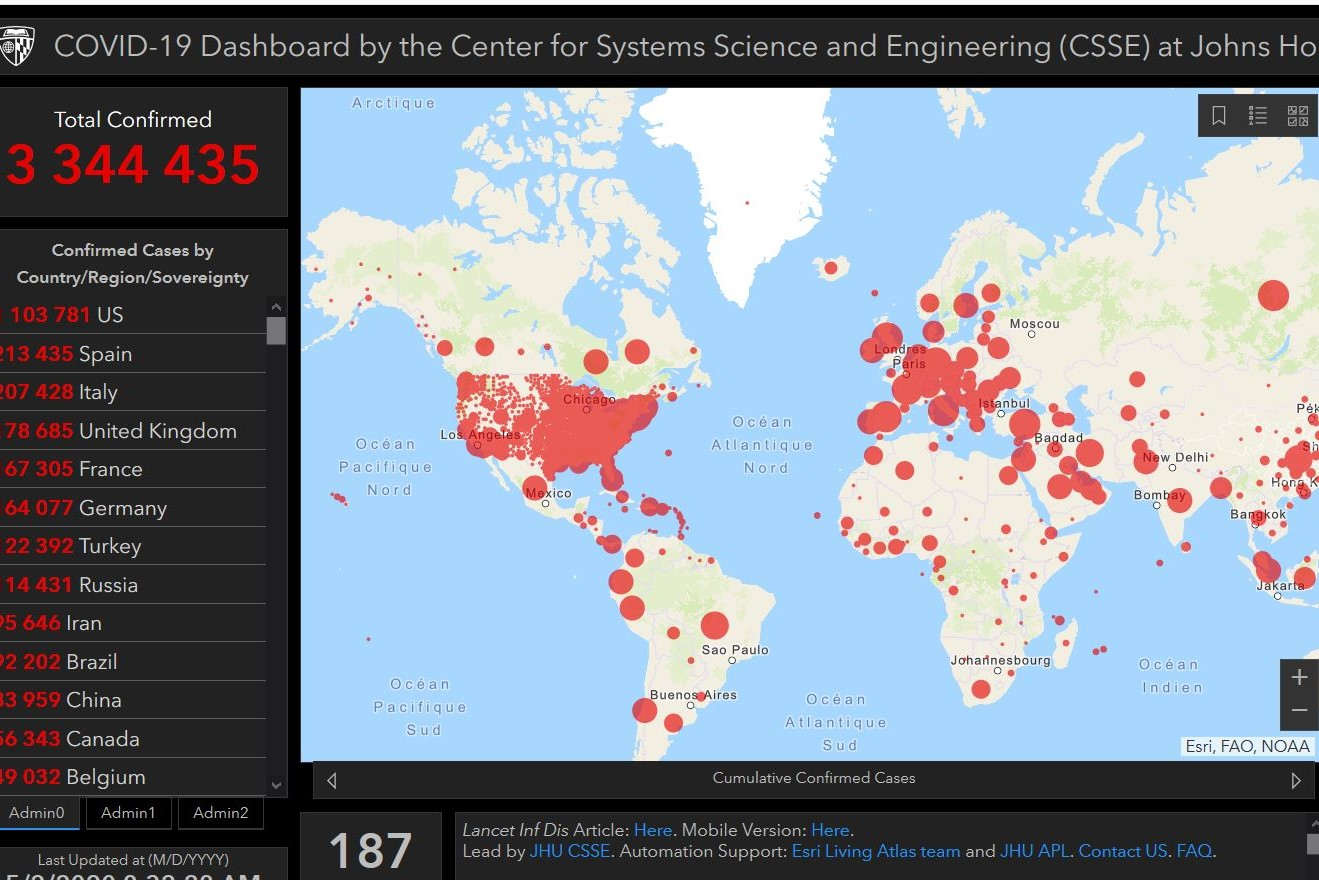 – Of the 239,448 deaths recorded worldwide since the beginning of the epidemic, 220,030 have been recorded in these 22 countries (94.8%) and 207,122 (86.5%) in Western countries (US, EU, NATO).
– 4,214 of the 5,624 deaths reported yesterday (74.9%) are “US, EU, NATO”. It is this camp that is paying today and will pay tomorrow the highest price both in human and economic terms (recession + probable economic crisis).
On a global level, the epidemic remains very lively in both the USA and the UK. It is gradually spreading in Latin America and particularly in Brazil, where it is becoming a cause for concern. It is mirrored elsewhere in Europe.
In the next few days, the balance sheets should become even more serious in the USA, the United Kingdom and Brazil. The milestones of 250,000 deaths and 3.5 million cases will be passed on Sunday 3 May.
Yesterday’s heaviest death toll remains that of the USA, the United Kingdom and Brazil. Between them, these three countries reported yesterday 51.4% of new cases, 55.9% of new deaths and 51.3% of critical cases worldwide.

A table of the current balance of cases and deaths by major world regions shows which regions are doing well so far and which have suffered and continue to suffer.

Asia, with the exception of Turkey, Iran, Japan, India and Pakistan, has virtually emerged from the epidemic. Its share in the balance sheet is gradually shrinking. The share of the American continent (North and South) and Africa is increasing very gradually. Analysis of the above table shows that the poorest developing countries are doing better than the rich countries, which have the means to provide better care. With 23.94% of reported cases, developing countries account for only 13.74% of deaths.

To put the human toll of this pandemic into perspective, the World Health Organization (WHO) tells us that, each year, seasonal influenza is responsible for 5 million “serious” cases, resulting in between 280,000 and 600,000 deaths. To date, Covid-19 has only affected 3.4 million people (tested), including nearly 510,000 serious cases resulting in 240,000 deaths.

Yesterday, the United States alone accounted for more than a third of the world’s Covid cases. They had the highest losses, nearly 66,000 deaths. These are still close to 2,000 deaths a day. The number of patients being treated stands at over 900,000. It rose sharply yesterday (+ 25,000). The number of critical cases, also on the rise, remains very high at nearly 16,500. The USA is not at the end of its sentence.
The situation in the United Kingdom continues to deteriorate. The number of patients treated rose by 5,500 yesterday to reach nearly 150,000. At the rate things are going, the United Kingdom, whose losses have already exceeded those of Spain, should dethrone Italy at the beginning of next week for the heaviest loss in Europe and take second place in the world, behind the USA. It has not yet reached the peak of the epidemic.
The situation in Brazil is becoming worrying. The number of new cases and deaths is increasing significantly. The number of critical cases is very high, second only to the USA at 8,328. The number of deaths is expected to increase further in the coming days.
The situation in France continues to improve. The number of new cases, critical cases and deaths over 24 hours has fallen sharply. France’s mortality rate to date is 377 deaths per million inhabitants (excluding deaths at home), compared with a world average of 30.7. This is the 5th highest human loss rate in the world.
As the epidemic is nearing an end, France is “finally” starting to test. Its meter was unblocked yesterday. With 11,101 tests per million inhabitants, France has improved its world ranking for this crucial activity recommended by the WHO since March 17. It moved up from 65th to 60th place. If it continues its efforts, France could even reach, at the end of the epidemic, the daily number of tests that it should have carried out at the beginning, in order to hope to save as many lives as possible. To date, its number of tests per million inhabitants is 4 times less than that of Portugal, behind that of Turkey and at the level of Peru: still too few and above all much too late for a large developed country…. (decision much too late by the Ministry of Health to exploit the existing capacities of veterinary laboratories).

The situation in Russia is deteriorating

With a cure rate, to date, of 30% of reported cases, at the national level, France is doing less well than Italy, which has cured 37.7% of its patients, and Spain, which has already cured 58.6%. It has healed far less than Germany, which has already sent 77.5% of its patients home, Switzerland, which has healed 80.5%, Austria, which has healed 84.4%, etc.
The situations in Italy and Spain are improving, with a drop in critical cases, stable deaths that remain below 300/day and a significant increase in recoveries.
The situation in Germany continues to improve on all indicators, even though it has lost five times as many cures as new cases yesterday, with a significant drop in the number of patients under treatment (-2,800 yesterday).
The situations in Turkey, Belgium, Switzerland, Sweden, Iran, Canada, India and Ireland are stable, while the situation in Russia is deteriorating.
It should be noted that for Iran and Turkey the number of recoveries is now higher than the number of new cases. While the losses are still very high for a small country like Belgium and significant for Ireland, Switzerland and Sweden, they remain low for Iran, Turkey and Canada and very low for Russia.
Russia is still testing a lot (190,000 tests yesterday), hence the very high number of new cases detected (still 2nd behind the USA at nearly 8,000). What remains worrying for Russia is the high number of serious or critical cases. The number of deaths will increase in the coming days.
Portugal and Ecuador passed the 1,000 mark on 1 May.
The epidemic is clearly spreading in Latin America. This is true in Brazil, but also in Mexico, Panama, Ecuador, Peru and Chile.

The mortality rates per million inhabitants of the 22 countries that have passed the 1,000 death mark, in the table below, give a small idea of the geographical areas most affected and the quality of the management of the epidemic by the governments of each of the states.

As a reminder, the Covid-19 mortality rate is 30.7 deaths per million inhabitants worldwide. 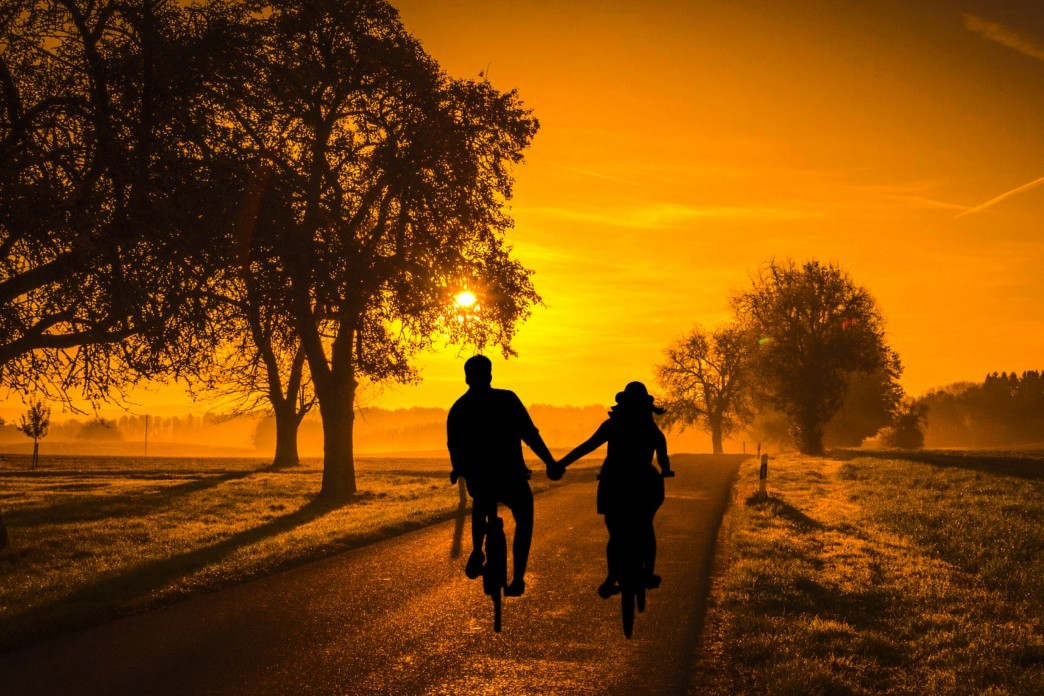 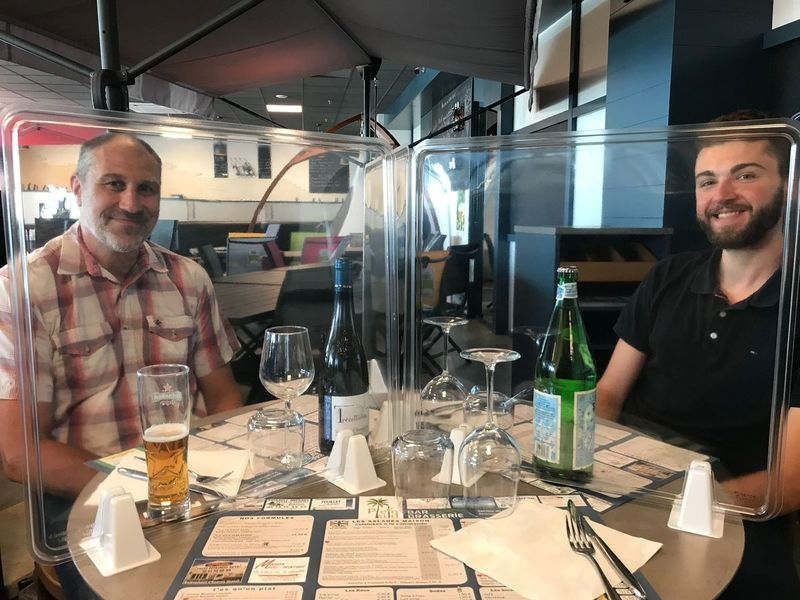