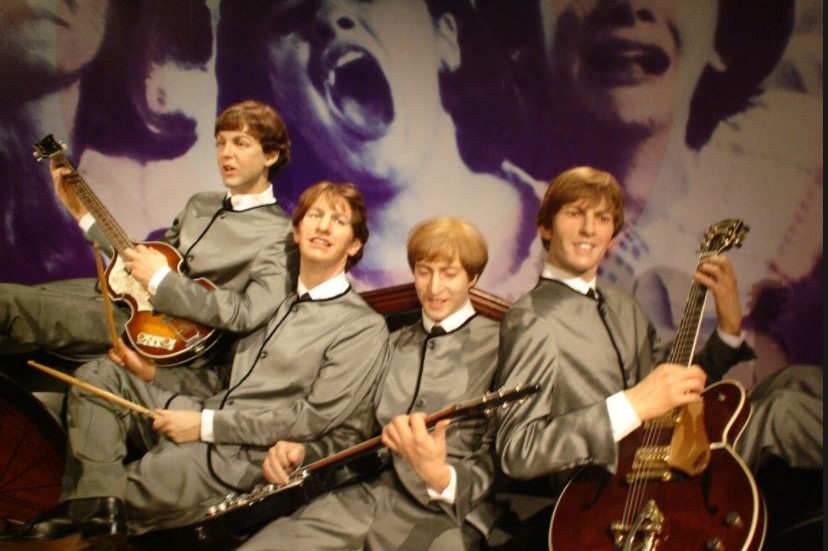 The Beatles promoted the spread of English around the world (Wikimedia.commons)

Not so sure! English is becoming more and more popular via our screens. Molière bows to Shakespeare.

How sad! English everywhere is progressing. French everywhere is regressing. In the newspapers, on the radio, on TV, Anglicisms abound. On the web, on social networks, in the street, the French language is increasingly misbehaving, tortured, martyred. The phonetic writing of millions of text messages that Francophones exchange every day contributes greatly to the decline in spelling. And the language of Molière.
Today, French is spoken by 274 million people in 29 countries. The language is the main vehicle of French thought and culture in the world. Yet it is neglected, even at the highest levels of government. Our elites speak – or sometimes gibberish – in English, both in Paris and Brussels. “…] the Anglo-Saxon snobbery of the French bourgeoisie is something terrifying, said de Gaulle (quoted by Alain Peyrefitte in ”C’était de Gaulle”) There is a whole bunch of lascars who have the vocation of servility. They are made to bow down to others. »
Language is, however, a principle of sovereignty, enshrined in Article 2 of the Constitution. “The language of the Republic is French. The national emblem is the tricolor flag, blue, white, red. The national anthem is the Marseillaise. The motto of the Republic is Liberty, Equality, Fraternity. Its principle is: government of the people, by the people and for the people. »

The King of France François I promulgated the Villers-Cotterêts ordinance In France, French became the official language on August 25, 1539 when King Francis I promulgated the Villers-Cotterêts ordinance which imposed French as the official language in place of Latin in the drafting of judicial and notarial deeds.
French was then the most widespread language in the Christian world.

In 1066, William the Conqueror, Duke of Normandy, invaded England. He spoke French or, more precisely, the Franco-Norman idiom which, among other peculiarities, transformed the “ch” into a “ke”. We didn’t say a cat, but a cat, we didn’t say charrier, but carrier.
Soon Franco-Norman was the only idiom worthy of men of high birth across the Channel. Then, that of the courtiers. They adopted not only the language but also the customs of the Normans. Thus, French quickly became the language of choice for English intellectuals, lawyers and clergy.
Everyone at the English court spoke French. It is so true that several kings of England did not speak a single word of English, reserved for the rabble, but only French-Norman. This was the case of Richard the Lionheart, but also of Edward III of England, King Plantagenet who, in 1337, launched his kingdom into the interminable Hundred Years’ War.
What remains, ten centuries later, of this Franco-Norman heritage? Many words in Shakespeare’s language are derived from French. 63% according to some linguists, much more for others. For example, the word most used in the world, love, comes from French se lover. Flirting? To recount flirting. Tennis? From… voila! And so on and so forth…
The motto of the British monarchy remained French: Dieu et mon droit. As for the most famous Order of Knighthood of England, the Order of the Garter, created in the 14th century, its motto is in French: Honni soit qui mal y pense.
It was in 1362, in London, that English became the official language in judicial acts and in 1385 for English to replace French in English universities.

From Marco Polo to Descartes

For a very long time, French was thus the vehicle language par excellence. Throughout the Middle Ages, merchants, travellers and poets spoke and wrote in French. In the 13th century, Marco Polo dictated his travel stories in French from his prison in Genoa. In 1250, Saint-Louis ordered a translation of the Bible into French.

During the Renaissance, the poet Joachim du Bellay wrote Defense and Illustration of the French Language, which made French as worthy a language as Latin and Greek. With a few poets, including Ronsard, he created La Pléiade, a literary movement that would renew the French language and give it its letters of nobility.The 16th century laid the foundations of modern French, which was derived from Latin and enriched by neologisms and contributions from regional languages. Poetic forms appeared such as sonnets, odes, ballads, elegies… The vocabulary grew and stylistic figures multiplied.
In 1606, Jean Nicot’s first dictionary was published under the title Trésor de la langue française tant ancienne que moderne. In 1637 René Descartes published his Discourse of the Method, one of the first philosophical essays written in French and not in Latin.
French literature was to experience a tremendous boom during the 17th century thanks to the comedies of Molière and the tragedies of Racine and Corneille. But also thanks to the fables of Jean de La Fontaine and the fairy tales of Charles Perrault.
We then discover all the richness and subtlety of the language. French lends itself, probably more than any other language, to all sorts of word games, witticisms, counter-play… The Académie française was founded in 1634 by Richelieu.
French, everywhere, dominates. This made Pierre Bayle write in 1685 that French is the point of communication for all the peoples of Europe.

The hegemony of the French is confirmed in the 18th. The Age of Enlightenment made the language of Molière a universal language. The great authors are called Voltaire, Montesquieu, Diderot, Rousseau, Beaumarchais, Marivaux… They embody all the literary genres and contribute to propagate the new ideas of freedom and equality.
French is spoken in all the courts of Europe. Princes and princesses exchange long letters in French. Thanks to the progress of printing, more and more novels and long letters are being read, addressed from one city to another, from one country to another. It is about philosophy, science and politics. And love too.
The 19th century gave France poets and novelists that the world envies: Hugo, Balzac, Zola, Dumas, Lamartine, Baudelaire, Rimbaud, Verlaine, Alfred de Musset, Alfred de Vigny, Stendhal, Gérard de Nerval and many others. Many make themselves known to the general public through the news they publish in the penny-pin press.
The influence of the French language has, therefore, no equivalent. French is the language of diplomacy, culture, knowledge and science…
It will remain so until the Second World War. Before giving way, little by little, to English.
In fact, English is spoken throughout the British colonial empire: in Asia, Africa and the Pacific. English literature has spread in the good society thanks to authors as prestigious as William Shakespeare (Romeo and Juliet, King Lear, A Midsummer Night’s Dream etc.) but also Jonathan Swift (Gulliver’s Travels) Lord Byron (Don Juan) Rudyard Kipling (The Jungle Book), Arthur Conan Doyle (Sherlock Holmes) and also Oscar Wilde, Charles Dickens…
After 1945, American economic and military hegemony imposed the American language and culture. At the same time, the decolonization of the French empire, particularly in North Africa and Southeast Asia, would contribute to the notorious weakening of French influence and the use of French in the world.
Certainly, France can still be proud to have great authors such as Albert Camus (L’Etranger), Malraux, Céline, Colette, Breton, Giono, Aimé, Troyat, Pagnol, Sartre and others. But American literature has not been outdone by renowned authors: Ernest Hemingway, Mark Twain, Jack London, John Steinbeck, F. Scott Fitzgerald, Philip Roth, William Faulkner…

From the 1950s onwards, new means of mass communication invaded the planet. Radio, cinema and television were dominated by the United States. Hollywood becomes the world capital of the film industry. And TV series produced on a mass market are sold all over the world.
Globalization is on the march.
Another phenomenon appears at the beginning of the 1960s. A British rock band founded in Liverpool was to fascinate young people on every continent. The Beatles is the most popular and influential group in history (several billion records and CDs sold). Their hits are on everyone’s lips. They sing in English. We are passionate about English and about England. Other big names in music will follow: Elton John, Joe Cocker, David Bowie, Freddie Mercury, Peter Gabriel…
Some of the great names of American music are also making their mark on the airwaves and in record stores: Bob Dylan, Franck Sinatra, Otis Redding, Joan Baez, Elvis Presley…
At the end of the 20th century, the information highways will accentuate the pre-eminence of English over French. High-speed computer networks transport texts, images and sounds at the speed of light.
At the beginning of the 21st century, America definitively imposed its culture and language in all fields thanks to its powerful search engine Google. The phenomenon will be accentuated with the appearance of social networks made in the USA: Facebook, Twitter, LinkedIn, Instagram, MySpace etc.
Impossible to fight. English is everywhere. The 1994 Toubon law, which obliges public companies in particular to use a French word, when it exists, rather than an English word, has no effect.
Even the courts are ignoring this law. In 2016, the association Francophonie Avenir (AFRAV) sued Lorraine Airport for changing its name to Lorraine Airport. In the end, it was the association that was condemned.
Better. While the official language of the Olympic Games is French (thanks to Pierre de Courbertin), our elites will plead the cause of Paris for the organization of the Games in 2024 or 2028 in … English!
The progression of English is inexorably invading us. In the Grandes Ecoles, in Paris and in the provinces, classes are given in English. The press conferences of the major French industrial groups are held in English. Large and small companies communicate in English. In train stations and airports, signage is in English.
From now on, the loss of French no longer shocks anyone. English words replace French words. They colonize us. As de Gaulle deplored, we submit to the dominant model.
Our children, our grandchildren, have integrated into their vocabulary thousands of English words that they do not know the equivalent of in French. It’s cool, best of, booster, geek, break dance, business, charter, crash, fast food, look, overdose, bug, buzz, selfie, email, scoop, low-cost, zapping, spam, news, sitcom, cocktail…
The phenomenon is irreversible. At this rate, in half a century at the most, people will no longer speak French in France. By losing our everyday vocabulary, we weaken our language. By losing our mother tongue, we lose our history. By losing our history, we lose our soul. Damn!