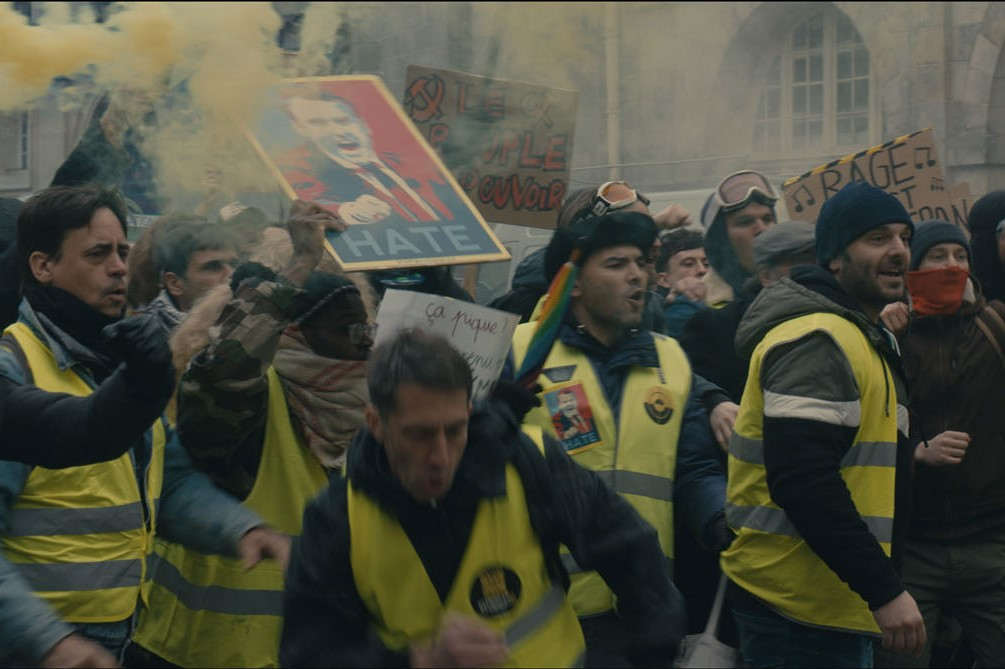 Catherine Corsini has reconstructed the demonstrations of the yellow vests (Pio Marmaï, on the right, plays one of them) with charges from the CRS, beatings, burned cars, and tear gas canisters.

During a night of chaos in the hospital, Catherine Corsini evokes both the health crisis and the yellow vests, and even manages to make us laugh.

A couple of bourgeois Parisians who tear each other apart, Raf and Julie (played by Valeria Bruni-Tedeschi and Marina Foïs), this could be the beginning of one of those self-centered auteur films. But then, the umpteenth argument takes place on one of those Saturdays when yellow vests invaded the capital, and the forces of order violently repressed the popular revolt. Even if they are far from this agitation, Raf and Julie are still going to worry about these autumn events broadcasted live on the news channels, because their grown-up son is at the demonstration, somewhere in the streets of Paris, between the Champs Elysées and République.

From intimate melodrama, one could then move on to social drama, but Catherine Corsini’s film, “La Fracture” (to be released on October 27), is neither one nor the other. The director of “La belle saison”, “Un amour impossible”, “Trois mondes”, “Partir”…, she wanted to make a “resolutely contemporary” film, a closed-door setting, with the hospital as the only setting, and a limited time, a single night.

A simple fall, a stupid slip in the street, leads Raf to the emergency room; after long hours of waiting, the diagnosis will come: a fractured arm. Among the too many patients in the waiting room, there is also Yann (played by Pio Marmaï), driver and yellow vest, provincial and prolo, injured during the demonstration, shrapnel in his leg. And in the midst of the medical turmoil, a dedicated nurse who works night after night on call, struggles to take care of everyone, Kim, played by Aissatou Diallo Sagna, who is really a nurse’s aide.

The nursing staff already in struggle

In an emergency department, it is a night of panic, of real chaos, that Catherine Corsini tells us. After the covid, the pandemic, the confinements, the film could be a battle behind, but no, the hospital was already in crisis long before, the nursing staff already on strike, the health professionals already in struggle. On this day of confrontations, they will be even more overwhelmed than usual by the influx of injured demonstrators; those coming from outside, those images seen “on the news”, yellow vests and CRS face to face, the blows, the burned cars, the slogans of which the most kind is “Macron resign!”. The violence comes to strike right up to the entrance of the hospital, the doctors opening the doors to the insurgents and closing them to the CRS, but not to the fumes of the tear gas canisters.

We hit each other on the outside, and inside the class struggle continues: Yann the angry yellow and Raf the evaporated bobo yell at each other copiously. And in this overheated hospital, we also enjoy the real moments of comedy that this film offers, selected in competition at the Cannes Film Festival and presented at the Deauville Film Festival. Thanks in particular to Valeria Bruni-Tedeschi, whose character is as funny as she is bad faith.

The most serious fracture is of course not physical, it is indeed that of French society that must be reduced; with realism and in a great tension, Catherine Corsini evokes both the health crisis and that of the yellow vests, and even manages to make us laugh. “The Fracture” is thus a successful assembly of drama, social discomfort, and dialogues that shoot and amuse.