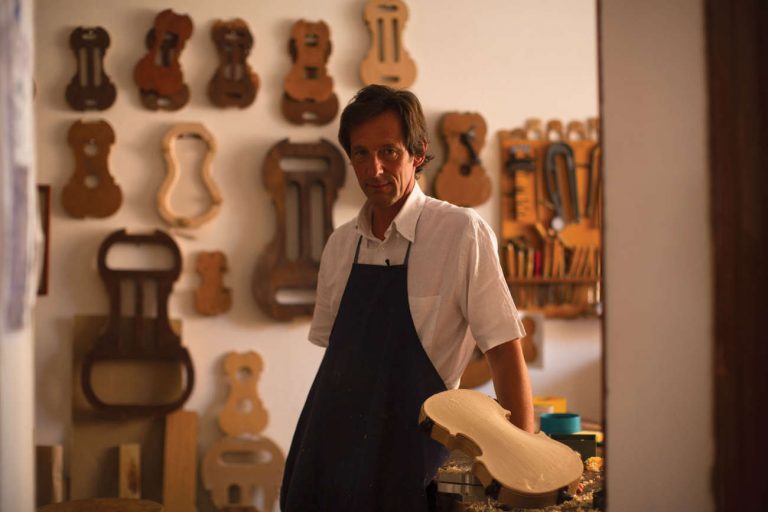 Gaspar Bordchardt, a master violin maker based in Cremona, the city of Stradivari, has a fixed idea to make the violin of his life.

Hans Lukas Hansen’s documentary follows a violin maker in search of the wood from which masterpieces are made.

It’s a kind of treasure hunt that Norwegian documentary filmmaker Hans Lukas Hansen recounts in “The Symphony of Trees” (to be released on December 15), the quest for perfection of master violin maker Gaspar Bordchardt. Settled with his wife in Cremona, the city of Stradivari, in love with the sound of the violin since childhood, the craftsman has a fixed idea: to make “the violin of his life”, an instrument that would equal in quality those designed by the great masters three hundred years ago. We follow Gaspar on his journey, which will take him to Central Europe, to the Balkans, where some hundreds of years old wavy maples are still hidden, the wood from which masterpieces are made.

He wants to make this perfect instrument especially for the virtuoso Janine Jansen, an energetic musician who usually plays on a Stradivarius, a precious object worth a fortune. But the perfect tree has to be found. Gaspar would be happy to imagine the violin he would carve from this rare spruce tree, but he still has to find it. In its treatment, this documentary is quite classical, but its originality comes from the subject, following a violin maker in search of excellence in his wanderings.

It will take Gaspar several years to reach his goal; he first delegates the task to intermediaries, then goes to Sarajevo, to a violin maker in Bosnia, meets a wood merchant, proves to be clumsy in negotiations, wanders through the Bosnian forests still riddled with mines, crawls up to 1200 meters of altitude in a snowy path… Where up there, there is indeed a tree, Gaspar believes he has found the right one, but refuses to cut it down. The tenacity of the man with the smile on his face will be rewarded much later, when he is put on the track of a tree already cut, a trunk lying on the ground, hidden by some branches, as if it was waiting for him. He can then go back to Italy with big logs of which he will make a violin, a brand new violin that will sound like an old one.

“The Symphony of Trees”, a documentary by Hans Lukas Hansen (released on December 15).