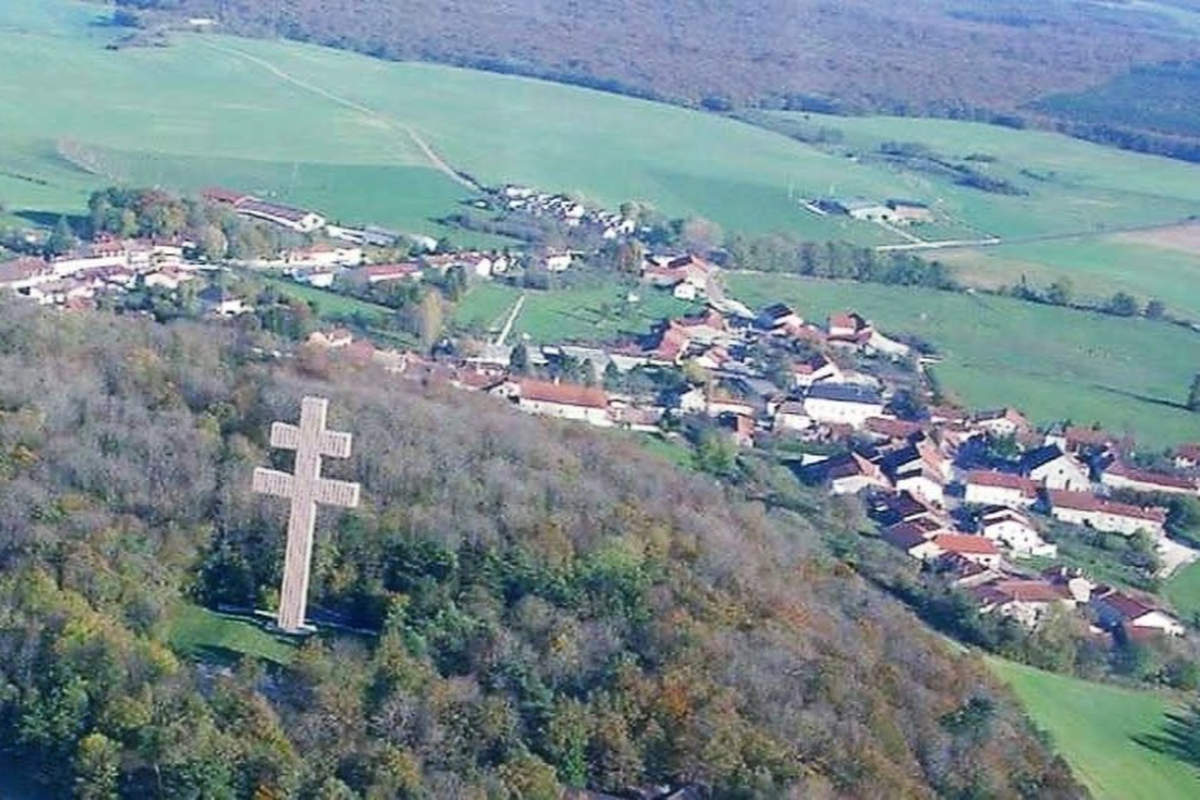 Cross of Lorraine in Colombey-les-deux-Eglises

Inaugurated on June 18, 1972, almost two years after the death of the General, the Lorraine cross in Colombey-les-deux-Églises (52) recalls the memory of the one who gave back to France its honor and its independence. But the origin of this cross is much older…

On June 17 and 18, 2022, the Cross will be celebrated through an exhibition and various activities as a rallying point, source of inspiration and monumental manifestation of the greatness of France. Below is the program of the two days of festivities.
But the Cross of Lorraine, whose 50ᵉ anniversary of its elevation at Colombey-les-deux-Églises (Haute-Marne) will be celebrated, has a very ancient history. The patriarchal cross represents the cross on which Jesus was crucified, to which was added a crossbar, shorter, above the first, to recall the sign on which Pontius Pilate had inscribed these letters INRI for ”Iesvs Nazarenvs, Rex Ivdæorvm” (Jesus of Nazareth, King of the Jews). It is close to the patriarchal cross known in heraldry.

The emblem of Hungary

Returning from the crusades, the double cross became the emblem of the kings of Hungary. It can be found on Hungarian coins from the 12ᵉ century onwards. Two centuries later, the marriage between Mary of Hungary and Charles II of Naples, made the kingdom of Hungary a possession of the house of Anjou.
René d’Anjou, the good King René, Duke of Lorraine and Bar in 1431, was the grandson of Louis I of Hungary from whom he inherited the title, but also the emblem of the double cross. He made it the emblem of Lorraine, which was to appear on his coat of arms from then on.
Half a century later, at the famous battle of Nancy, on January 5, 1477, René II’s soldiers carried the Hungarian Cross, which became the Anjou Cross and now the Lorraine Cross, to defeat the Duke of Burgundy, Charles the Bold. It will remain a symbol for all the patriots of Lorraine.

Cross of Lorraine versus swastika

After the Appeal of June 18, the question arose as to how best to identify the resources and forces of the Free French in order to distinguish them from those of Vichy. It was necessary for the Free French to find a distinctive sign. On July 1, 1940 in London, on the proposal of Vice Admiral Muselier and in the presence of Lieutenant-Commander Georges Thierry d’Argenlieu, the Lorraine cross was adopted as the emblem of the Free French.
This sign, so easy to memorize and to draw clandestinely, was also opposed to the swastika of the Nazi occupier.

Two years after the death of the General

General de Gaulle died on November 9, 1970 and his body was laid to rest in the family grave in the small cemetery of Colombey, next to his daughter Anne. Two years later, the Cross of Lorraine was raised in the sky of Colombey. Supported by the barons of Gaullism, gathered in a national committee, the project was also supported by the Grand Chancellery and the Companions of the Order of the Liberation, legitimate bearers of the Gaullist memory. The de Gaulle family follows the project very closely, participates in the decisions and ensures that the Gaullian values are respected.
One of its dearest wishes is to affirm and demonstrate that this memorial project has no political character.
The village of Colombey-les-deux-Églises will come alive on June 17 and 18 for the 50th anniversary of the Cross of Lorraine and the first Gaullist meetings in Colombey !