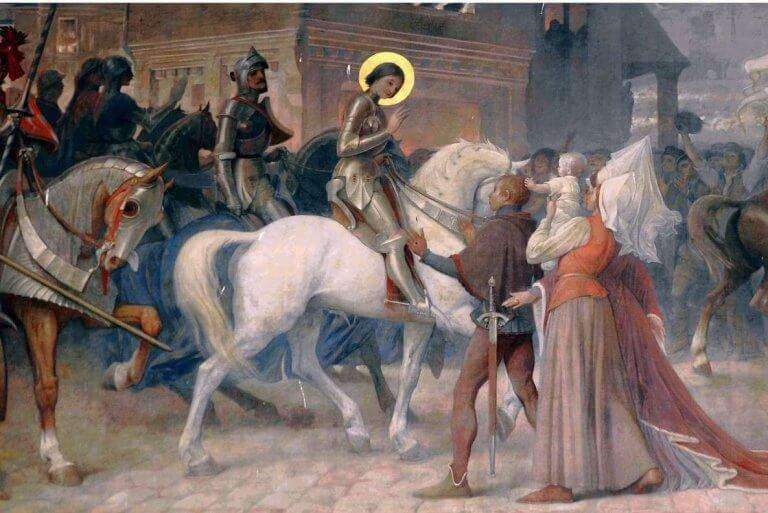 Jeanne was a living myth as early as the 15th century (fresco in the Basilica of Domrémy, DR).

The ploy of the envoy from heaven to save the kingdom of France was conceived by an exceptional woman: Yolande of Aragon, Duchess of Anjou, Queen of the Four Kingdoms. The operation was masterfully executed by another exceptional woman: the Pucelle d’Orléans.

Little known and little studied, Yolande of Aragon, the king’s mother-in-law, played a major role in the history of France. For forty-two years, from 1400, when she married Louis d’Anjou in Arles until her death in 1442 in Saumur, she was at the heart of all the important events of the first half of the 15th century. Yolande is a woman of power, of real power, that of influence, which she always exercised in the shadows.
Yolande was born on 11 August 1379 in Zaragoza. Daughter of King John I of Aragon and Yolande de Bar, Yolande is the granddaughter of King John the Good of France. She is a Valois. Her education was entrusted to religious people who taught her diplomacy, patience and obstinacy. These are intellectual and moral qualities that she will be able to play with.
At the death of her husband, she is thirty-seven years old and has five children. The Duchess of Anjou inherited all the titles of her late husband. She is therefore Queen of Sicily, Queen of Naples, Queen of Jerusalem, Queen of Hungary. The queen “of the Four Kingdoms” also owns many lands and their castles: Provence, Maine and, of course, Anjou.
Yolande is a fine strategist who knows how to take advantage of family ties. His son, René d’Anjou, heir to the Duchy of Bar, married in 1420 to Isabelle of Lorraine, the only daughter of Duke Charles of Lorraine. Thus, the two neighbouring dukedoms of Lorraine and Bar were united under the same crown placed on the head of a prince of the Armagnac party.

Come and take it if you dare!

This discreet and beautiful woman (the most beautiful woman in the kingdom, it was said) is of a rare lucidity. She knows how to anticipate events when she does not provoke them. Her cold calculations always give her several steps ahead of her opponents.
An example. In 1413, when there was no hurry, she decided to betroth her daughter, Marie, aged 9, to Charles de Ponthieu, aged 10, third son of King Charles VI and the Queen of France. With the agreement of Queen Isabeau and the Royal Council, she took Charles under her protection at the castle of Angers. She took charge of his education to protect him from the harmful influence of his mother and the dangers of the court.
Two years later, in 1415, the dolphin Louis died, probably poisoned. Two years later again, the dolphin John dies in his turn. Charles became dolphin in 1417. Queen Isabeau understands the manoeuvre. Too late, it was too late. She wants her son back? Yolande opposes it in these terms: “A woman with the potential to become a lover has no need of children. You could let him perish like his brothers, drive him mad like his father, or sell him to the English like yourself. My guard. Come and take him if you dare! »

Charles married Mary in 1422. Yolande thus became the king’s belle. She will do everything to preserve her son-in-law’s inheritance. In 1420, she is bruised by the Treaty of Troyes which disinherits the dolphin Charles for the benefit of the little English king Henri VI. She will not leave the kingdom in the hands of the English. She will fight to preserve the property of her family and the kingdom of her son-in-law. She will commit her fortune and put her clever intelligence at the service of her family.
When after a long stay in her county of Provence, in 1423, she returned to Anjou, the English took up a position near her lands. Yolande did not hesitate to take command of the troops, she rode on a splendid white horse armoured with steel and silver and attacked the soldiers of William de la Poole, Earl of Suffolk. The English were frightened by this outstanding rider riding a sparkling steed. They thought they saw the devil and left the battlefield with all their legs.
Of course, I see this scene as a foreshadowing of what another woman will do on the battlefield. Jeanne, the Maid, will also terrorize the English soldiers.
Is Yolande the inspiration for the Johannine epic? The “mastermind” of what looks like a secret operation? The one who developed the subtle ploy of the envoy from Heaven to terrorize the English and have the infamous Treaty of Troyes annulled? There’s every reason to believe so. No absolute certainties, but a great deal of suspicion.
Yolande was in Nancy only two weeks before the interview of Jeanne and Duke Charles of Lorraine in February 1428, an interview that was decisive for the trip to Chinon. The captain of Baudricourt was close to the Queen of Sicily. Yolande was still in Chinon at the beginning of March to welcome the Virgin who was going to meet the king for the first time. Yolande is in Poitiers when Jeanne is going to be questioned by the learned doctors of the commission chaired by Regnault de Chartres. It is Yolande who will carry out the clinical examination of Jeanne’s virginity. Would this great lady have agreed to take part in this kind of test if she had been a simple shepherdess?

It is in Tours, a city faithful to Yolande that Jeanne has her armour and her standard made. Jeanne’s relatives are faithful to the Queen of Sicily. Jeanne’s equerry, head of her personal guard, Jehan d’Aulon, is Queen Yolande’s confidant and her relative, Marie d’Aulon, the maid of honour of the Duchess of Anjou. It is Yolande who finances the troops that gather around Blois to supply Orléans. Jeanne’s chaplain, Jean Pasquerel is a Franciscan, like Yolande, herself a member of the Franciscan Third Order. On her banner Jeanne had “Jhésus Maria”, the motto of the Franciscans, inscribed. The Friars Minor (Franciscans) are pro-Armagnacs while the Friars Preachers (Dominicans) are pro-Burgundian.
It is Yolande with the help of the powerful Franciscan networks and perhaps even that of Colette de Corbie who “prepared the spirits” for the coming of the one sent from Heaven. Propaganda is on the march. Prophecies (fake news) are running around the kingdom. It is announced everywhere that a virgin will soon come to the rescue of the king and his kingdom. Merlin’s prophecy predicts that “a Virgin of the Oak Forest will ride against the Archers’ backs. “The prophecy of Mary Robine, a recluse in Avignon, announces in her prophetic verses that the kingdom lost by a woman (Isabeau of Bavaria) will be saved by a virgin (Joan).
The spirits are prepared, even manipulated. Hope is reborn among the troops of the King of France. An irrational fear seizes the English soldiers who will have to face an envoy from Heaven.

Yolande will be the permanent adviser, the one who makes and undoes the affairs of the kingdom. She wants to protect the dolphin first, the king second. She eliminates the favourites who have a negative influence on the king and surrounds him with trusted men.
Between 1417 and the entrance of the Pucelle, twelve years later, not a treaty was signed, not an alliance was negotiated without it being the work of Queen Yolande. “A man’s heart in a woman’s body” said her grandson, King Louis XI.
On February 12, 1419 a truce was concluded with the English. Yolande was not vested with any official powers. She was not even yet the king’s mother-in-law. However, the treaty bears her signature next to that of the King of England Henry V and the dolphin Charles.
In 1425 Yolande imposed on the dolphin Arthur de Richemont, brother of the Duke of Brittany, to take the lead in military operations. Richemont will be named Constable of France. She removed the sovereign from the influence of his favourites and did not hesitate to resort to the hard method.
Thus, Lord Pierre de Giac, master of finance and then head of the Council, was arrested on 8 February 1427 at Issoudun on the orders of Constable Arthur de Richemont and Queen Yolande. He was thrown alive into a river, sewn into a leather bag. Jean Vernat, known as “Le camus de Beaulieu” captain of Poitiers succeeded Giac in the heart of the young king. In June of the same year he was assassinated in his turn.
The constable and the queen of Sicily imposed King Georges de la Trémoille as their great chamberlain.
Everything is ready. Operation Pucelle can begin.