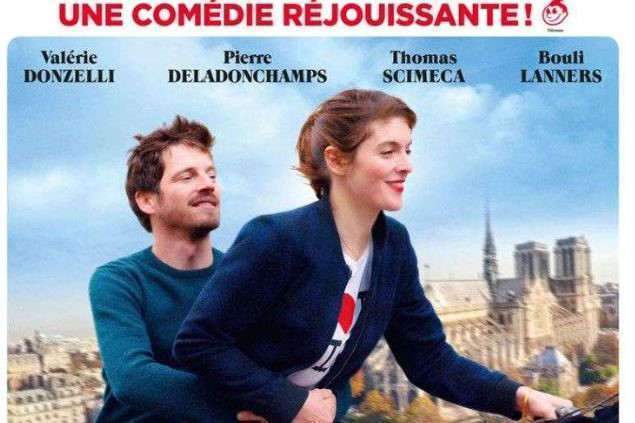 What I like about Valerie's cinema is that there is a leg," says Pierre Deladonchamp

It was obviously before the fire that ravaged the cathedral that Valérie Donzelli turned this hectic life of Maud Crayon into one. “I wanted to find something happy again, to reconnect with comedy,” says the actress and director.

Chance and coincidences of current events and cinema, Valérie Donzelli was finishing editing her new film when a terrible fire ravaged Notre-Dame de Paris in April. Amazing, because her film is called “Notre Dame” (released on December 18) and the director had shot it partly in the cathedral and on the square. A week before Christmas, spectators will be able to see Notre-Dame as she was before, with her arrow pointing towards the heavens. Emotional sequence, necessarily.

In her film, Valérie Donzelli plays a Parisian woman born in the Vosges, like her; Maud Crayon, a name predestined for an architect. This Vosges woman in Paris has a hectic life, she is a woman who runs, overtaken by events, she has a job so, two children, an immature ex from whom she is separated without really being separated (she is expecting a third child), she finds her youthful love (a journalist from France 3 played by Pierre Deladonchamps), and almost without her knowledge, she wins an architecture competition to design the square of Notre-Dame.

Valérie Donzelli leads Maud Crayon’s tribulations with this fantasy, offbeat, inventive, burlesque cinema, which has been hers since “La Reine des Pommes”, and which we find in “Main dans la main” (with Valérie Lemercier), and even the drama “La guerre est déclarée”. A film that evokes the seriousness of our contemporary society but with the lightness of a healthy mind, as if the filmmaker had received divine absolution. “It was very impressive to shoot in Notre-Dame vide, at night we were given the most emblematic keys to Paris,” says Pierre Deladonchamps, “We were all very impressed by the power of the monument, which is immense and imposes a form of glare.

Meeting in Nancy with Valérie Donzelli and Pierre Deladonchamps, two artists from Lorraine, during the premiere of “Notre Dame” at Le Caméo.

Valérie Donzelli: “Maud Crayon is both me and all women”

Besides being both born in the Vosges, what are the other common points between you and Maud Crayon?

Valérie Donzelli: I am a woman, like Maud Crayon, I have children, like Maud Crayon, I work, like Maud Crayon… Maud Crayon, it is both me and all the women I know, who surround me. I like to start from who I am and my story, but also to move away from it and try to tell something a little more universal than my little personal story. The will was to make a film that would be made by a woman in her forties, that shows a little bit the difficulty of leading everything at once, also to make a comedy about failure and about this character of a woman who is in the middle of her life and must succeed in freeing herself, in making good decisions.

Notre-Dame is intact in your film, so it becomes a document for the story…

Yes, indeed, there is a somewhat historical dimension to the fact that there was this incident at Notre-Dame; in the film, we see her as she was before the April fire, it’s quite moving to see her as such.

How did you react the night of the fire?

I didn’t feel well when we made a film called “Notre Dame” about an architectural project around Notre Dame’s square, and that it was all very crazy and burlesque, so we were obviously not very comfortable. We don’t know how people will react when they discover the film, after the pain it caused, it was complicated. Now, we’ve moved a little further away from it, I think people are happy to find it as it was.

There is indeed an architect competition in your film, while President Macron has also launched such a competition for the reconstruction of the arrow…

Yes, it’s crazy. We wondered, but the film was shot before the fire and finally we decided not to change anything, not even the title, it’s part of the story now. I wanted to find a place in Paris that was plausible to do an architectural project there, and that could cause scandal because something modern would be added. I thought that with the square in front of Notre-Dame de Paris, this kind of no-man’s-land, it could be quite credible that we launched a call for tenders to redevelop it.

“There is a dreamlike dimension in the film”

Was it easy to shoot at Notre-Dame?

In fact, it takes time to get the authorizations, but we got them and then that’s it, we realized that we were the only ones who asked, no one had thought about it before.

Your character is an architect, it’s a way to reconnect with your studies, you really wanted to be an architect?

Except in your previous film, “Marguerite and Julien”, there is in your cinema this burlesque, whimsical side, you even add some magic this time…

Yes, there is a real dreamlike dimension in the film, it was really close to my heart. Finally, with everything I was accused of in the previous film, which was a tale and allowed all the freedoms of storytelling, including the mixing of eras, I told myself that I wasn’t necessarily going to make a film in the nails, like what we expect, but on the contrary, to drive the nail of this thing I hatched, from film to film, which is to mix genres and try to do something special. I also wanted to reconcile myself with my work, which had been very badly treated on “Marguerite et Julien”, and during the manufacturing process and afterwards. The film was painful in its making and in its release, it was very rejected, I wanted to find something joyful, to reconnect with comedy.

On the substance, however, there is a very serious, very contemporary discourse on the state of emergency, migrants, attacks, etc.

Yes, it was really the will to talk about deep things, but to wrap these things in something rather whimsical, rather zany, rather burlesque. It’s my way of approaching cinema, I find that it puts a sense of modesty on the things in which I feel comfortable, an area in which I like to evolve.

“Paris has fallen into stress and fear”

With this gag over and over again, people slapping each other, should we see the daily behaviour in big cities?

I think there’s something very aggressive about Paris, people almost fight for nothing, I think the city is changing a lot. Since 2015, since the attacks, Paris has been under stress and fear that we didn’t know before, suddenly we had to search our bags to enter a museum, there were soldiers in the street with machine guns, it was a very anxious climate, people were afraid as soon as the subway stopped, everyone was scanning each other. We were traumatized and it turned the city into a kind of overload of emotions, Paris has completely changed in recent years and the climate has been affected, people are afraid, they are more and more selfish, individualistic.

Another link with current events, the upcoming municipal elections, your mayor of Paris, played by Isabelle Candelier, really reminds us of the real thing…

It’s certainly a reference to Anne Hidalgo, who read the script, who gave us the keys to the town hall, we shot in her office, she came on the set, she supported the film a lot.

With “Notre Dame”, you are still flirting with the musical, is it still part of your desire to make one?

It’s complicated because, apart from Jacques Demy, it’s not a cinema that the French particularly like, the Anglo-Saxons are more of a customer, but it’s true that I would love to, maybe I’ll get there, but it’s difficult. French songs do not lend themselves to the same rhythm as American or English songs, we did not invent rock, we invented Brassens, Aznavour, Piaf, but we are not pop in our culture.

The fact of touring in the most prestigious of churches is a reminder of your grandfather’s work?

It’s funny because there is currently a lot of work going on around my grandfather and great-grandfather and the fact that they restored churches in the Meuse after the war. It’s funny that I’m making a film called “Notre Dame”, with Notre Dame burning, maybe unconsciously it played a role… I also told myself that I was going to make a documentary about the restoration of heritage, because in villages the State doesn’t give money to restore heritage, and the works of my great-grandfather are rotting, the villages can’t find three francs six cents to restore the frescos that are hyper-belles. In fact, there are many churches, many monuments, many places that need to be restored but we cannot do it and we let things die.

What made you agree to play in “Notre Dame”?

Pierre Deladonchamps: Valérie, because I loved her work, I was very surprised by the welcome of “Marguerite and Julien”, because I loved the film, I find that it is rare films that are so full of singularity. What I like about Valerie’s cinema is that there is a leg, in addition she offered me a comedy, which I particularly like even if it’s not my basic job. I was delighted to meet you around this scenario and we had a lot of fun doing it; the film is beyond what I could have imagined on paper, because Valerie creates a lot on the set.

Lately we’ve seen you in some pretty serious roles, for an actor it’s a breath of fresh air to enter into a comedy as whimsical as this one?

Exactly. It’s no less work, I’m not putting less personal involvement into it, but it’s true that we’re going to look in different places. I have the impression that in comedy we make more while trying to be credible in the first degree; in drama I no longer use really very personal things, from which I leave as soon as the scene is finished. Making people laugh is very hard, and in fact comedy is noble, it is very hard to make a good comedy, intelligent, with a background, and in Valerie’s film there are many things, in every scene you can find things that echo current events, the condition of women, or the precariousness of work, it is also political to make a film.

You made a short film, “Soul mates”, did it make you want to make a feature film?

Yes, I am developing my first feature film, with producers who have trusted me; that doesn’t mean that the film will be released, they have hired me to give them a script, which I am about to give them very soon. I was inspired by a Japanese play, “The Tropical Tree” by Yukio Mishima, the very free adaptation served as a basis for my work, it is also a tribute to cinema. And I’m going to try to get the advance on receipts at the CNC, which is a bit of a grail when you want to make a first film. Today, the state of French cinema means that before writing a film, you already have to think about exploitation and how you will be able to present it to the public, it is a little more complicated than before with the digital offer.

“Notre Dame”, a film by and with Valérie Donzelli (released on December 18).