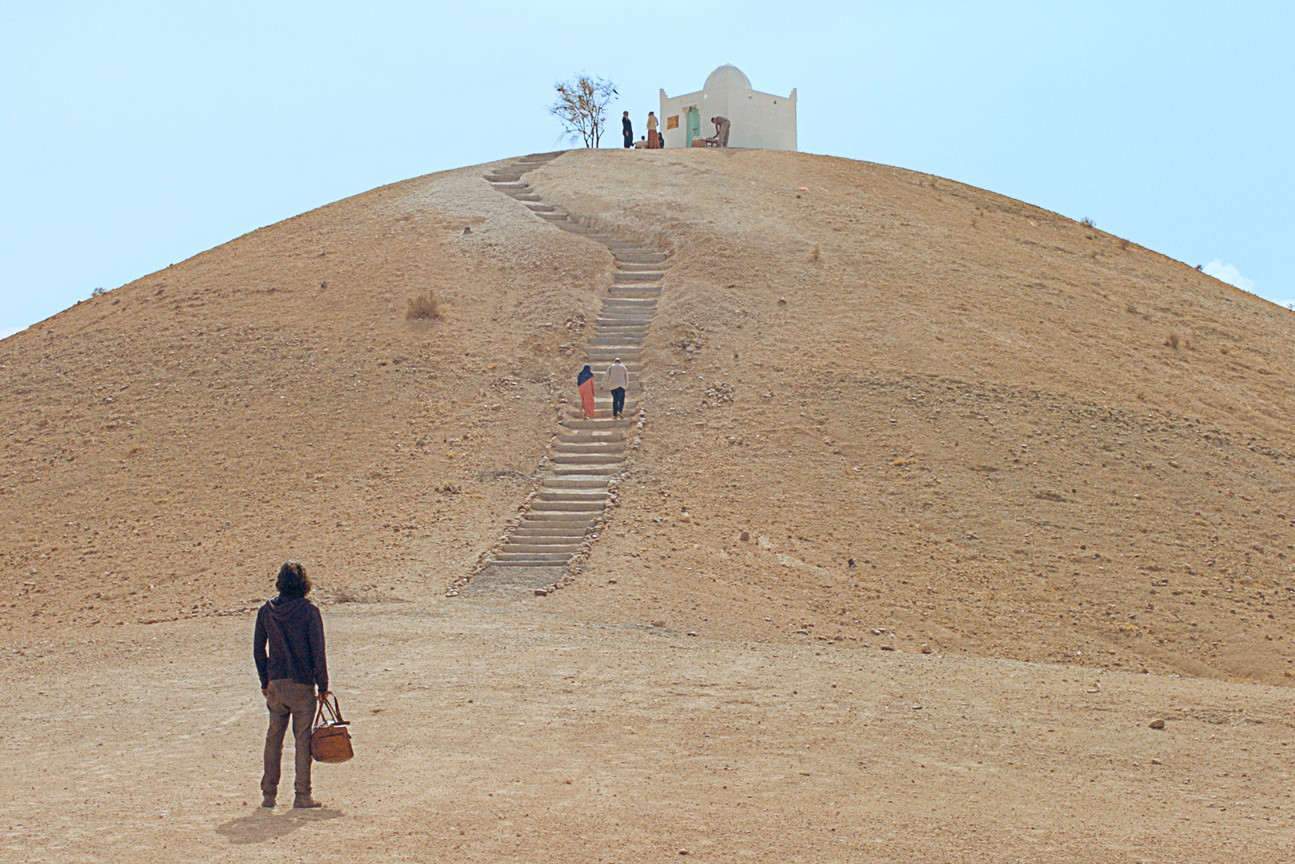 A thief is distraught when he discovers a mausoleum in the location of his loot. "The thief is the common thread in this story," says the director.

“It’s both a film about belief, the relationship to faith, and the link between faith and money,” says Alaa Eddine Aljem, the Moroccan director of this endearing fable.

A car stops on a deserted, broken-down road, a man pulls out a shovel and a bag, goes to bury the bag on top of a hill in the middle of nowhere, marks the spot like a grave, before being stopped. Later, the thief, because he is a thief, gets out of prison and immediately gets his loot back. Problem, a mausoleum was built around the “tomb”, it is now a place of pilgrimage, guarded night and day. As soon as it opens, Alaa Eddine Aljem’s film, “The Miracle of the Unknown Saint” (released on January 1, 2020), sets the tone: we are in a fable.

A village has been built at the foot of the mound, a new doctor arrives at the dispensary, an old man has been waiting in vain for a rain shower for ten years to grow his harvest, to the great despair of his son, the men meet at the barber’s, a watchdog has gold teeth, and in the distance one can hear explosions of dynamite for a new road. Absurd situations, which become funny, follow one another in this first feature film (which opened Critics’ Week), with an endearing, light tone, which unfolds quietly. The gullibility evoked in “The Miracle of the Unknown Saint” is of course a universal story, even the thief believes very strongly that he will be able to get his money back.

Meeting with the director Alaa Eddine Aljem, during the premiere of his film, “The Miracle of the Unknown Saint”, at the Le Klub cinema in Metz.

“There are no villains, no heroes, no anti-heroes.”

You imagined this thread as a tale, a fable?

Alaa Eddine Aljem: Yes, from the beginning of the writing process, there was a desire on my part to work on something of the order of a tale, a fable. I had already done that in my short films, especially in “Desert Fish”, shot in the same location. In Morocco, we have a long tradition of storytelling, which is generally transmitted orally. When I was a child, my grandmother used to tell me stories, I was lulled by this culture of storytelling. So I was interested in working on the Arab storytelling code and transcribing it into film. The notion of time is not very important in the film, time is suspended, we don’t really know how many days or weeks this story takes, it’s the temporality of the tale.

With an almost unique setting, this desert landscape, a village, there’s a claimed western side to your film?

Yes, there is a western side, both in the village, in the settings that suggest that, and also in certain scenes, such as the barbershop scenes. I needed a place that was arid, that was devoid of buildings, for the sake of the story itself, there had to be a far-western side, I needed a micro-society isolated from the world, a desert that wasn’t a real desert, something more mineral, more pure, that desert was a desert of pebbles, of rock, it was perfect. With the director, we liked working on certain framing, we are always in confrontation, because the narrative form of the film is built on duels, the thief and his sidekick, the doctor and the nurse, father and son…

Besides this false saint, we prefer to pray for rain rather than go to the doctor, your point is to evoke the weight of beliefs and traditions?

It’s both a film about belief, the relationship to faith, and the link between faith and money. In this case, we are observing a micro-society through this village, which refers to a larger society, which is Morocco, but we are touching on something that is ultimately quite universal, which is the human being. All the characters in the film are somewhat suspended between an ancestral, traditional way of life, more rooted in faith and belief, and on the other side something more in materialism, money and modernism.

Yet these beliefs are never mocked…

One of the important limits for me was to laugh with but not at. And when you laugh at something, you laugh at situations, but not at a belief. The camera is distant, the whole film is in still shots, the idea was to be in a position of observer, we are not in an intimate camera, with points of view, where we take sides in one way or another. We are observing a phenomenon, a society and people suspended between two things, two antagonisms, an ancestral way of life and a more materialistic way of life, and the absurdities of their daily life; they are looking for a balance that they cannot find. All the characters have been designed to be kind, there are no villains, no heroes, no anti-heroes, there is no notion of right and wrong, just a quest for landmarks. Everyone is confronted with boredom, there are quite a few actions that are guided by boredom, which also contributes to the film’s humor.

“My generation is in the in-between”

Is this opposition between tradition and modernism a way of talking about Morocco today?

It’s a way of speaking about Morocco, but I think that man in general is a bit suspended between two things, we’ve moved on to an era where matter has taken over, in all the countries of the world, there’s nothing more sacred today than money. Even the most human issues are calculated according to material factors, everything is very codified, but today there is also a great revival of interest in everything that is ancestral culture, traditions, return to the earth, spirituality… We are looking for our balance between heaven and earth. Morocco has now reached a crucial phase in its history, for a long time society was governed by popular beliefs, laws in accordance with religion and tradition. Today, it has entered a modern era, it wants to be a country that is part of modernity, in today’s world, there are inevitably antagonisms and confrontations. I live in Morocco, I see how our parents grew up and their way of thinking about society, the world, is not ours, but at the same time my generation is in an in-between situation.

You said there are a lot of still shots in your film, there’s also burlesque, quite a bit of dialogue, was Jacques Tati’s cinema one of your references?

When you read it, you could see that there were different genres, it could go into tragedy at times, then into more comic things, burlesque, comedy… I really like Italian comedy, I like Jacques Tati and his visual humour, Buster Keaton, whose character is not expressive but who finds himself in absurd situations that make you laugh, I find myself in that, but at the same time I like Iranian cinema, the simplicity of their framing, I also like Scandinavian humour, it made a lot of references but it didn’t make one in particular. Several newspapers quoted Kaurismäki and Suleiman, and in the Anglo-Saxon press it was “The Coen brothers in the Maghreb”, it suited me very well, I like this tone between tragedy and comedy.

There’s a certain moral, since the thief is finally badly rewarded for all his efforts…

This thief reminds us a little of the character of Charlot, someone who is at the centre of everything, who provokes everything, is the cause of everything, but at the same time suffers enough, he goes through all this so that he gets nothing out of it in the end, in fact it’s the red thread. Everyone makes a step forward, but this person is the only one who ends as he began.

Morocco is now attracting international film shoots, is it easy to produce films there?

At the moment, the production and financing part is going rather well. There are more and more foreign shoots, which gives a lot of work to the technicians, it allows them to train new ones, to keep up to date with what’s being done elsewhere, it creates an economy. “Game of Thrones”, “Homeland”… all these series were shot in Morocco, but also “Men in Black”, “Mission Impossible”… it’s months of shooting, a lot of work and a lot of money. It’s very good for the industry part, and Morocco is one of the oldest countries in the region that supports and finances national production; there is a Moroccan CNC, with a rather important and efficient aid fund, which supports development and production. On the other hand, there is no internal market, there are only about forty cinemas in the whole country and attendance is quite low.

“The Miracle of the Unknown Saint”, a film by Alaa Eddine Aljem (released January 1, 2020).