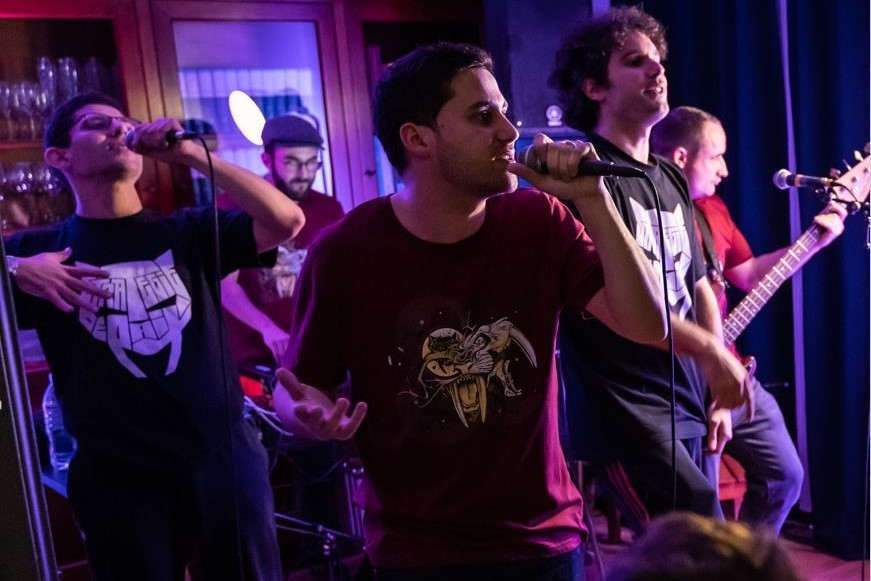 The band in concert

The rap group born in Lorraine has just released its first album entitled Esperluette and gives concerts all over France.

Esperluette?” It is the name of the logogram & which means”and”, i. e. the link, the relationship to others”, explains Salomon, a passionate writer and musician from Bar-le-Duc, now teaching eco-management at the university in the Paris region. With his brother, Isaac (cook) and a friend, Robin, they created the group in 2003 and named it Stratégie de Paix. A whole program.
“Peace is understood both as the opposite of war but also as inner peace,” the rapper emphasizes. The band grew soon after with the arrival of Ion, the bass player-singer (he is an educator) and Warga, the DJ-machinist-guitarist (computer engineer).
With strong lyrics and music with new sounds, Stratégie de Paix has been giving concerts in Lorraine and the Grand Est since 2008. The first album was released in 2015 “Encore un bout de chemin” with nine songs.

Solomon will spend a year in Tunis. He nourishes his thoughts and texts, which are always oriented towards others and towards Peace. New concerts, all over France. The audience is delighted.
The album Esperluette was released on November 22, 2019. It contains 13 pieces “which answer each other”, explains Solomon. And it’s already a success.
The album was recorded in a studio in Toul and Paris and pressed in the Vosges.
The group will give a concert at the Bar-le-Duc prison, Tuesday 17 December 2019 and then a concert open to the public (and free of charge) on Friday 20 December 2019 at 8.30 pm at Le Temps Perdu in Bar-le-Duc.
In 2020, several concerts are already scheduled, including one in Lille, in April, others in Paris and the provinces.
The album is available on the band’s website.