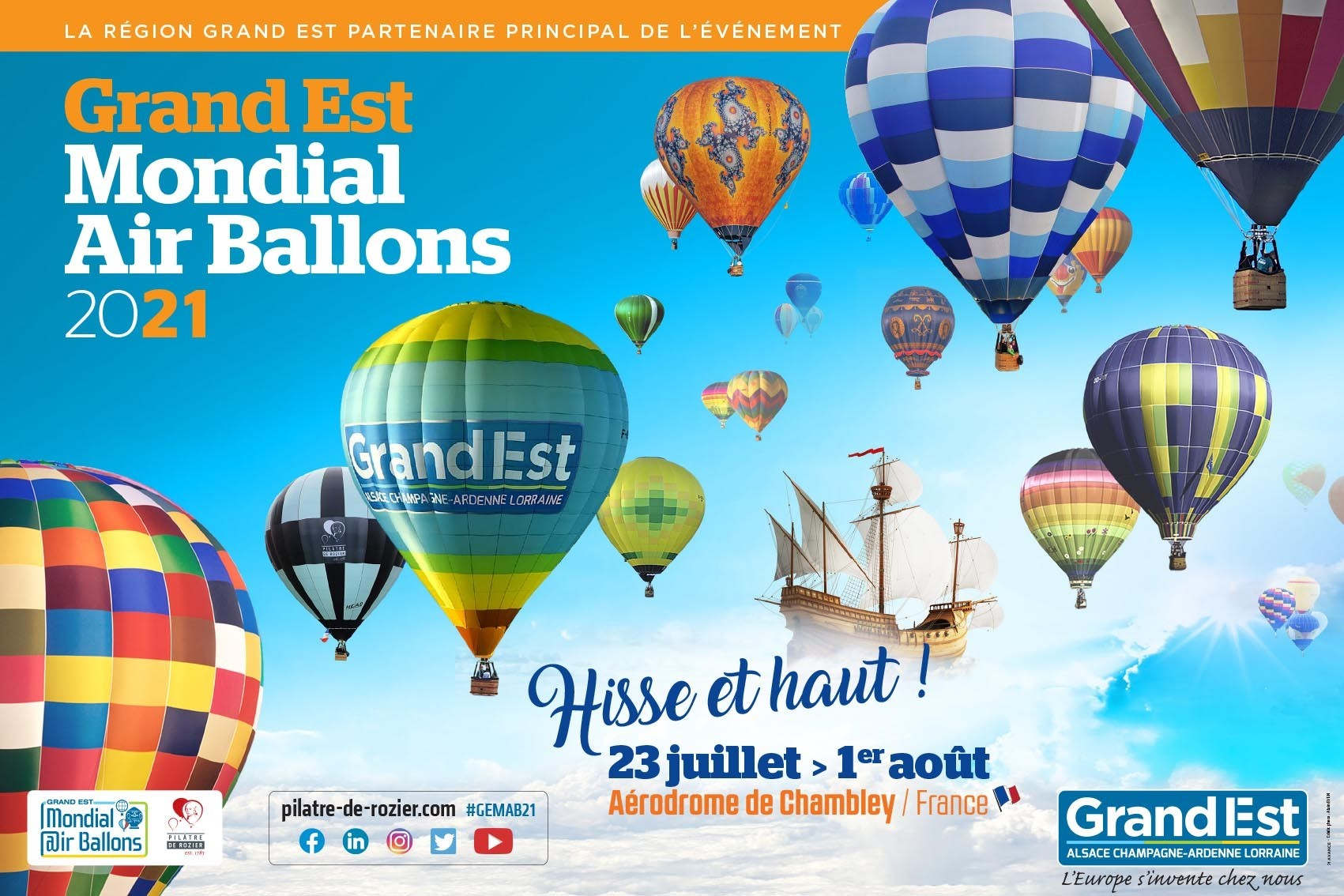 With the vigorous slogan “Heave and heave”, the organisers of the 17th edition of the world’s largest international hot-air balloon gathering intend to renew their gamble launched in 1989: to take spectators beyond the clouds.
From Friday 23rd July to Sunday 1st August 2021, the “Grand Est Mondial Air Ballons” #GEMAB21 will be held on the Chambley aerodrome (LFJY), between Metz and Nancy in the heart of the Regional Natural Park of Lorraine. No less than three thousand pilots and crew members are expected from all over the world.
At the rhythm of two daily mass flights (morning and evening), the ballet of hundreds of hot-air balloons (a world record of aligned balloons taking off in less than an hour was set during the 2017 edition with 456 balloons) mobilized more than five hundred thousand spectators over the ten days in 2019. In constant increase, the public is mostly family and from all over the Grand Est region, but also from France and abroad.

Ten days of holidays and dreams

Unusual and colourful shows, sports competitions, the #GEMAB is a fabulous vehicle for the region’s image and contributes to the tourist economy to the tune of 30 million euros in economic, media, direct, indirect and induced spin-offs.

On the ground as well as in the air, the organizers are deploying numerous activities, workshops, presentations, first flights, and an aeromuseum. They are building a “balloon city” for ten days, with all the services. Since 2019, access to high-speed Wifi has been greatly appreciated by the public to immortalize and broadcast photos and videos of the flights.

The event takes place on a former American base, rehabilitated by the Regional Council. For the past 10 years, it has been an aerodrome with 25,000 movements per year, which hosts many aeronautical activities. And since January 2020, the site has been awarded the Campus Aéronautique d’Excellence label by the Lycée Jean Zay de Jarny’s aeronautics department.

On the occasion of this new edition, the organizers with the slogan “Hisse et Haut” (Heave and High) would like to recall the heritage of boats in air navigation for 237 years. The date of the first human flight by Pilâtre de Rozier, a child of Metz, was indeed November 21, 1783.