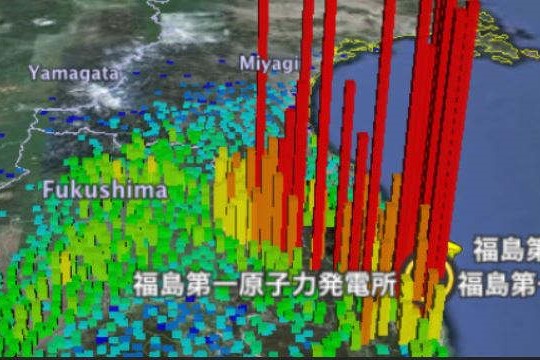 The catastrophe in Fukushima, Japan, on March 11, 2011, is a major nuclear accident that the ACRO association (for the control of radioactivity in the West) is following on a daily basis. It even dedicates a dedicated ACRO site to it, Fukushima. Its president, David Boilley, explains here that we are not immune to such an event.

ACRO has been monitoring the nuclear disaster at the Fukushima dai-ichi plant and its aftermath for 10 years. With more than 2,700 articles, photos, videos and two live webcams, it is the most comprehensive French-language site on the subject.
The association reconstructs the events, from the first moments of the disaster. Earthquake at 2:46 p.m. with a magnitude of degree 9.0 followed by a tsunami. A few seconds later, the emergency shutdown is triggered in the 3 reactors in operation. The generator set of the crisis cell of the power station, located in Ôkumamachi 5 km from the power station, starts automatically when the electricity is cut off. It will only run for about one hour. 4:46 p.m.: A state of emergency is declared at the Fukushima power plant, the first time in Japan. 9:23 p.m.: The government orders evacuation within a radius of 3 km and confines the inhabitants living between 3 and 10 km.
The damage is considerable. A vast area of eastern Japan was exposed to radiation.

On the occasion of the tenth anniversary of the Fukushima disaster, the Chikurin Citizen Laboratory carried out a new campaign of analysis of radioactive contamination of vacuum cleaner dust in 153 houses. This study complements other projects of citizen monitoring of radioactivity in which Chikurin is also involved:

The purpose of this project is to assess indoor contamination by measuring the caesium concentration in house vacuum cleaner dust 10 years after the nuclear accident. Exposure of residents through inhalation of this dust is in addition to other exposures to radioactivity.

Sites are ranked from most contaminated to least contaminated. They can be viewed on this map which indicates the area close to the house, so that people cannot be identified :

This meticulous and independent work of the ACRO association has, among other merits, that of making us aware of nuclear risks. Because an accident can also occur at home in Europe and in France.

-Why is the ACRO association that you chair interested in the nuclear accident in Fukushima, Japan?

Since its creation, following the Chernobyl accident, ACRO has been working for access to radioactivity measurement for all. In particular, it monitors discharges from nuclear facilities. In Fukushima, following the strong discharges into the environment, it was obvious that the population would need measurements independent of radioactivity. We therefore supported the affected populations for two years, monitoring many and varied samples, while we opened a laboratory on site that took over.

The Fukushima disaster is also a major and complex event that marks the history of nuclear power. We are therefore following up, on a dedicated website (https://fukushima.eu.org), in order to allow a French-speaking public to understand what is happening at the Fukushima daiichi nuclear power plant and in the contaminated territories.

The disaster took place on March 11, 2011. Is such an accident possible in France or in Europe?

The Chernobyl nuclear accident was considered, in the West, as a “Soviet” accident. It was an experiment that went wrong in a reactor that was less safe than Western reactors. Fukushima showed that a serious accident was possible in a Western reactor, with massive releases.

All the presidents of the Nuclear Safety Authority have, since Fukushima, said and repeated that a serious accident was also possible in France or in Europe.

What lessons do you draw from this, ten years later?

The subject is so vast that it would take several pages to describe all the lessons to be learned from this disaster, and I am sure I cannot be exhaustive. The first lesson that has been learned in Europe is to tighten safety requirements for existing reactors, even if new equipment is slow to be installed in France. Several countries have also decided to do without nuclear power.

At ACRO, we have worked on nuclear accident emergency plans in several countries (Belgium, France, India and Ontario in Canada). The reports are available online. It is clear that we are not prepared to deal with an accident of this magnitude. Just one example: Switzerland extended the distribution of iodine tablets from 20 to 50 km after the Fukushima disaster. Belgium, from 20 to 100 km. And France, from 10 to 20 km… The evacuation of the Futaba clinic, located 2 km from the Fukushima daiichi power plant, resulted in about 50 deaths. People needing care are the most vulnerable in the event of a nuclear accident. Continuity of care must be well prepared.

With several power plants on rivers that supply drinking water to millions of people, there is a specific vulnerability in the event of a serious accident that is not taken into account. In the summer of 2019, we discovered that 6 million people were drinking water with tritium released from nuclear facilities. What will happen to them in the event of a serious accident? Will this water still be drinkable? If not, what supply is planned? We realized that the “Orsec Drinking Water Plans” still had to be drafted …

About the Western Association for Radioactivity Control

The ACRO is an association under the law of 1901 declared to the Prefecture of Calvados on October 14, 1986. It is approved for environmental protection by the Prefecture of Calvados. It was created, by a thousand people, in the months following the Chernobyl accident, in response to a lack of information and means of controlling radioactivity. Equipped with an approved radioactivity measurement laboratory, ACRO carries out studies and monitoring of radioactivity in the environment on its own initiative or in response to requests from local authorities, local information commissions (CLI) or associations. On a daily basis, it runs the Citizen Observatory of Radioactivity in the Environment, which involves people living in the vicinity of nuclear facilities alongside the laboratory in active monitoring of radioactivity levels around their homes.
The association is chaired by David Boilley, PhD in nuclear physics, scientific adviser of the Citizen Laboratory for Measuring Radioactivity Chikurin (Japan), ACRO representative at the CLI of the Channel Storage Center, active volunteer in the ANCCLI (Permanent Group on Radioactive Materials and Waste).