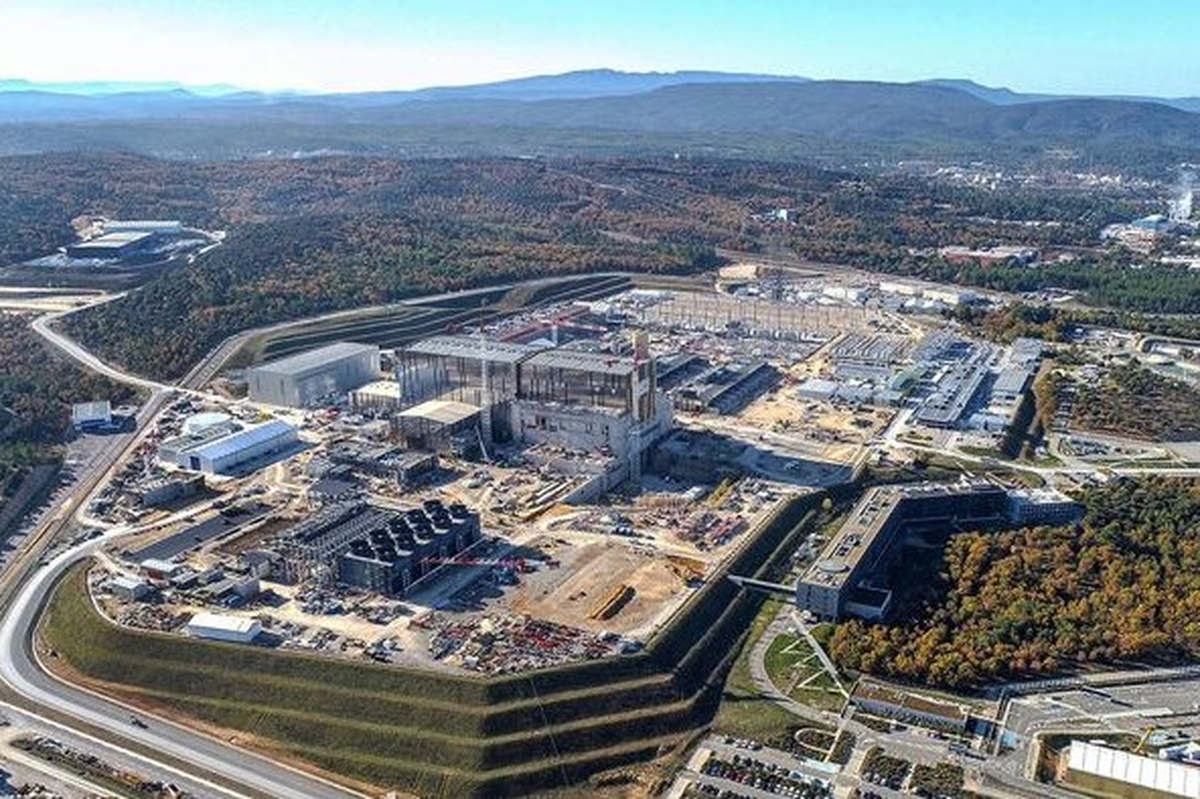 The ITER experiment is under construction at a site in southern France, with first plasma operations scheduled for 2025. The tokamak building is the mirrored structure at center. Photo credit Courtesy ITER Organization/EJF Riche.

ITER or the International Thermonuclear Experimental Reactor, currently under construction at Cadarache in the South of France, is getting ready to receive the biggest magnet in the world.

No one knows how much ITER will cost. The initial budget was €5.9 billion and some estimates indicate the final bill will be €55 billion. Shared between 35 countries it is not so painful.
Begun in 2007, to no one’s surprise it is six years behind schedule and is now 78% complete. It is planned to go into operation in 2035.

General Atomics have announced that the giant magnet designed by Magnet Technologies has begun its journey from San Diego California in the United States.
The magnet will weigh 1000 tons, be 18 meters high and 4,2 meters wide. It will be capable of an electromagnetic induction of 13 tesla or 280,000 times the world’s magnetic field. It will theoretically be capable of lifting an aircraft carrier. Known as the Central Solenoid it is a key component of the experimental tokamak reactor.
ITER’s mission is to prove energy from hydrogen fusion can be created and controlled on earth. Fusion energy is carbon-free, safe and economic.
For the past 15 months, massive first-of-a-kind components have begun to arrive in France from three continents. When assembled together, they will make up the ITER Tokamak, a “sun on earth” to demonstrate fusion at industrial scale.
The collaborating partner countries are: the European Union (plus the United Kingdom and Switzerland), China, India, Japan, Korea, Russia and the United States. Most of ITER’s funding is in the form of contributed components.

The Central Solenoid, the largest of ITER’s magnets, will be made up of six modules.

Its magnetic force is strong enough to lift an aircraft carrier 2 meters into the air. At its core, it will reach a magnetic field strength of 13 Tesla, about 280,000 times stronger than the earth’s magnetic field. The support structures for the Central Solenoid will have to withstand forces equal to twice the thrust of a space shuttle lift-off.
The Central Solenoid will play a critical role in ITER’s mission to establish fusion energy as a practical, safe and inexhaustible source of clean, abundant and carbon-free electricity.
The Central Solenoid modules are being manufactured at GA’s Magnet Technologies Center in Poway, California, near San Diego, under the direction of the US ITER project, managed by Oak Ridge National Laboratory (ORNL). Five additional Central Solenoid modules, plus one spare, are at various stages of fabrication. Module 2 will be shipped in August.

How does fusion work?