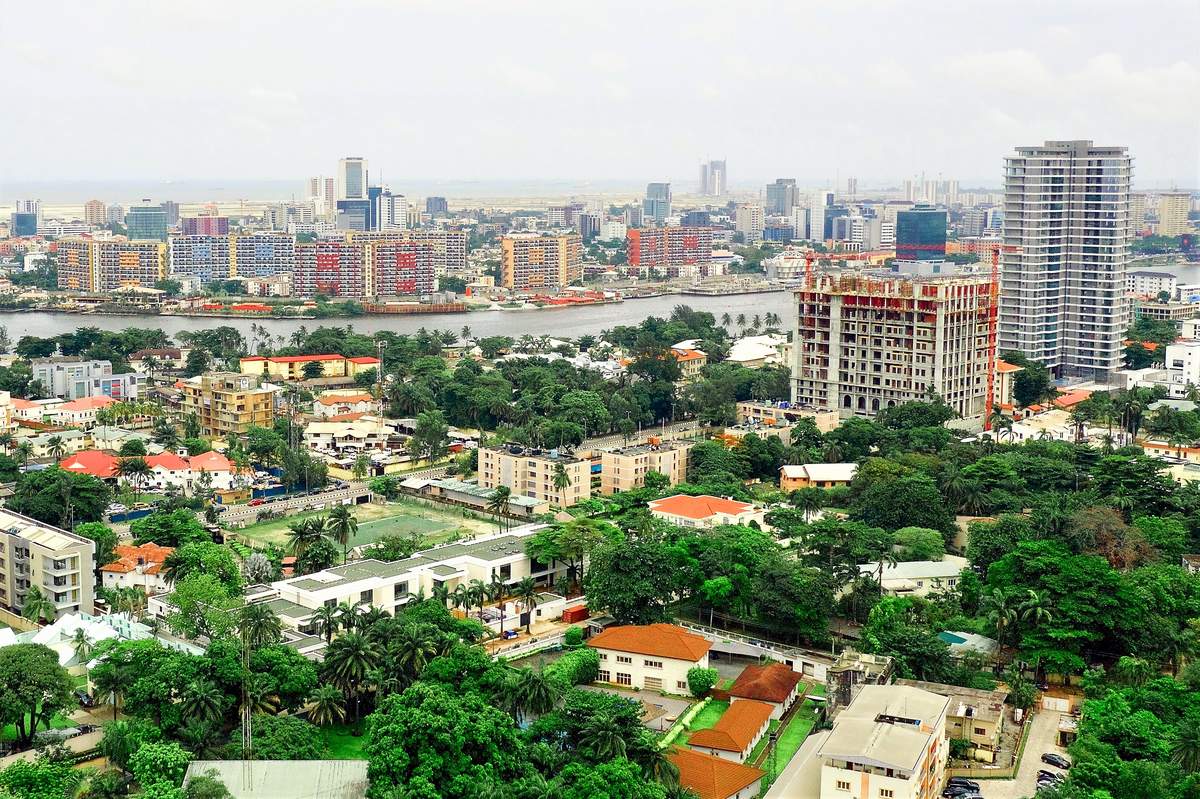 Ikoyi, an upscale suburb of the megacity Lagos, Nigeria. Beyond the lagoon is Victoria Island, and beyond that is the new city under construction called Eko Atlantic City, right on the Atlantic Ocean.- Reginald Bassey, CC BY-SA 4.0, via Wikimedia Commons

Struck by the global pandemic, the African economy saw its GDP decline by 2.1% in 2020. However, the post-Covid recovery offers good prospects, particularly in construction and real estate.

Africa has suffered from the sudden halt in global economic exchanges due to the pandemic. In 2020, its GDP (of $2.2 billion) recorded a negative growth of 2.1%. But the post-Covid recovery is confirmed in many sectors. Supported by tourism and the export of raw materials, the continent’s development is based on a galloping demography, gigantic mineral reserves (platinum, chromium, diamonds, cobalt, bauxite, coal, gas, etc.), and on a nature that is still preserved in this immense and diversified region.

The challenge of urbanization

For many economists, Africa appears to be the continent of the future. This is so true that China, Russia, India and, to a lesser extent, Europe, are investing massively in African countries. The exponential demographic growth which is a source of great poverty, particularly in the African subcontinent, can become a major asset for its development if it is accompanied by infrastructures adapted to its domestic market.
The African Development Bank estimates that $170 billion in investments are needed in this sector. Roads, factories, offices and buildings must be built to current standards in order to develop all sectors of the economy, facilitate transport, energy, training and access to information technology.
Urbanization is another major challenge for the future of Africa. The real estate market is one of the most promising in the world. Lagos, Nigeria, is expected to see its population grow from 17 to 24 million between 2020 and 2030. Abidjan, in Côte d’Ivoire, is expected to reach nearly 8 million inhabitants, compared to 5 million today. Everywhere, construction is needed. Major groups are already working to accompany these major upheavals, such as the Duval Real Estate Group in Africa, which has been present in Africa for over 40 years.

From the Maghreb to South Africa, from Senegal to the Horn of Africa, the African continent covers more than 30 million square kilometers, with 54 states and 1.3 billion inhabitants. Of course, situations vary from one region to another. However, the need for housing adapted to the middle classes is enormous. The real estate market therefore offers unique opportunities.
Africa’s development is still in its infancy. For the seventh consecutive year, French-speaking sub-Saharan Africa has shown the best performance on the continent, according to data provided by the African Development Bank in its “World Economic Outlook” report, published last January,” notes the Centre d’étude et de réflexion sur le monde francophone (CERMF).
This group of 22 countries managed to limit the damage during the pandemic while the rest of the continent recorded a negative growth rate. The recovery here is on solid ground.

Experts estimate that the African economy will reach a GDP of $29 trillion by 2050. It will then play a major role in the global economy thanks to its mineral wealth, but not only. The World Bank expects most of the continent’s countries to reach “middle-income” status, with a per capita GDP of at least $1,000 over the next decade.
Led by a handful of countries such as Nigeria, Africa’s largest economy, but also Egypt, Algeria, Morocco, Angola, Kenya, Ghana (the continent’s second largest economy), Tanzania and a few others, Côte d’Ivoire, Benin, Guinea, Africa appears to be a very promising continent for investors, despite its current difficulties. For all these reasons, Africa remains a continent to conquer.

Nord stream 2: US concedes but Germany commits to support Ukraine