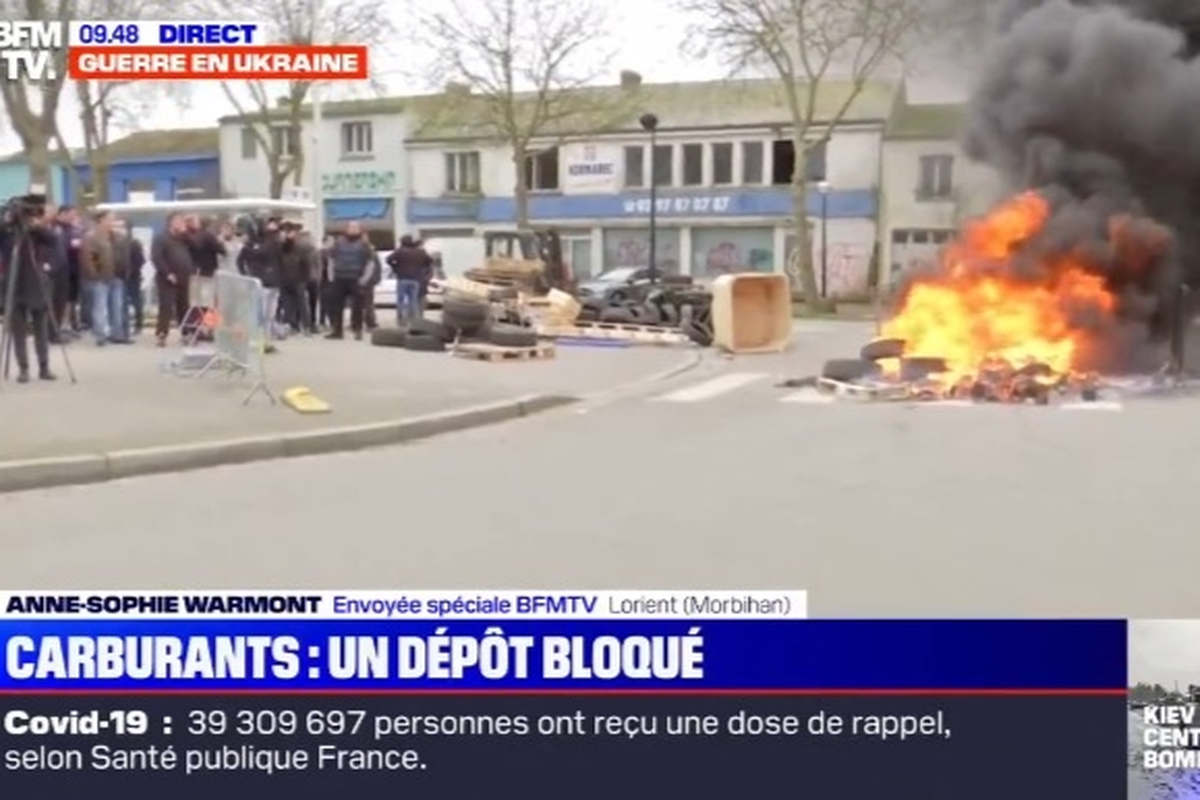 Tractors and trucks are blocking oil depots in Finistère and Morbihan to denounce the soaring price of gasoline and diesel fuel. Fuel is becoming an issue in the election campaign.

Never seen before. The price of fuel exceeds 2 € per liter at the pump for several days. And it’s not over yet. What to worry all those who use a lot of fuel to work.
This Tuesday, March 15, 2022, a few dozen vehicles have blocked two oil depots in Brittany. In Brest, there were about 200 demonstrators displaying signs that read: “Gasoil too expensive, ship to shore” or “Gasoil too expensive, we’ve got it in the butt”. The same thing happened in Lorient where 200 demonstrators blocked the entrances and exits of the depot with vehicles and wooden pallets. The same desire to alert the authorities to the exorbitant price of diesel.

Aware of the difficulties caused by this price hike for motorists, fishermen, farmers and transport companies, the Prime Minister, Jean Castex, has promised a discount of 15 euro cents on the price of a liter of diesel or gasoline from … April 1, 2022. An April fool’s joke that makes nobody laugh.
“Why wait until April 1 ?” ask consumer associations? Why not immediately?
Several presidential candidates are ironic in proposing a reduction on the ballot.

We know that the price of fuel is due to taxes levied by the state. When you fill up a 50 liter tank of diesel at 2 to the liter, you pay 100 €. Of which 25 € for crude oil, 11 € for transport and distribution, 1 € for refining, and 63 € for taxes (VAT and TCPE). This makes the professionals say: “The oil groups and the State are lining their pockets while we work at a loss. This cannot continue.

Diesel in the countryside

Obviously, the increase in fuel prices has become an issue in the election campaign, like the more general issue of the increase in the general price level. The war between Russia and Ukraine does not help matters. Contrary to what the Minister of the Economy Bruno Le Maire announced, who promised to cause “the collapse of the Russian economy”, it is the French economy that is collapsing.

The association 40 millions d’automobilistes proposes the “operation coup de pompe”. To protest against the increase in fuel prices, the association calls on all motorists to send their fuel tickets to Emmanuel Macron. It is to show the power the financial difficulties encountered by each French to use their vehicle. Note: sending a letter to the President of the Republic does not require any postage.