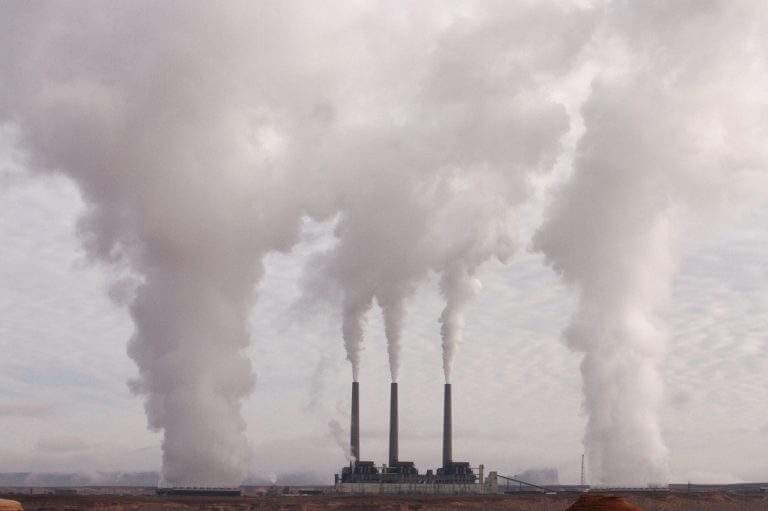 CO2, nuclear, plastic, pesticides threaten the survival of Humanity. There is a link between these four scourges that could be controlled. Proposals for environmental transition: two avenues of reflection.

Is there a link between these four disasters? Yes.
The principle is simple, even if the scientific reality is a little more complicated. We capture the smoke from the industrial unit that produced it (e.g. thermal power plants, especially coal or fuel oil, but also gas, cement factories, iron and steel plants, etc.), filter it, circulate it in a water tube containing micro-algae exposed to light.
Thanks to completely natural photosynthesis, these will spontaneously capture a large part of the CO2 (of the order of 50%) and thus fix the carbon which will be reusable in different forms that can be correlated with the four threats.
A cycle lasts a few days. Thus, we switch to the short or even ultra short carbon cycle (CUC), i.e. the carbon that we reject will be captured, fixed and reintroduced into the circuit instead of aggravating the greenhouse effect as fossil carbon does.
Right from the start, we could get about half the CO2 emissions. (3.)
There are several hundred thousand species of microalgae, of which only a few tens of thousands are, to date, well described by Science.

After further scientific investigation, this technology would allow us to consider several avenues.

Concerning the 700 net tons of CO2 emissions per second

We could replace oil by a biofuel, pure vegetable oil (PVO), especially no industrial agrofuels or deforestation!
Diesel engines, boilers and even airplanes can easily be adapted to run on PVO, one of the important resources of which could be micro-oilseed algae that do not require deforestation or the use of any arable land. (4).
Methanization can be done in large quantities. Thus, for vehicles or power plants, we could also consider liquefied methane in the form of Gas to Liquid (GTL).

While some prominent politicians come to tell us that we have no choice, that we must continue with nuclear power, despite the unbearable threat it poses to humanity (For example: what has become of the radioactive materials that left the Pacific at Fukushima?). (See the magazine Science et Vie of February 2017).

It is necessary to study immediately the mass production of our electricity in ultra-short carbon cycle with methanized micro-algae! Same productive capacity as nuclear power, but in a much shorter chain, without risk and infinitely less complex and less expensive.
This would consist of nothing other than the use, on a large scale, of a totally natural, free and safe phenomenon: photosynthesis.

Unlike the production of industrial agrofuels such as vegetable oil methyl ester, neither fertilizers, pesticides nor GMOs are needed to produce microalgae in large quantities. This reduces the above-mentioned threat of fertilizers and pesticides. Especially since the methanization of microalgae could be, at the same time, the origin of the massive production of almost non-polluting organic fertilizers.
Even better! A company in the Southwest of France is developing a bio-pesticide based on micro-algae that could replace chemical products with minimal damage to the environment.
Recently published studies have shown the disappearance of 420 million birds in Europe in only 30 years.

Get down to business as quickly as possible

It is very urgent to set the mechanism in motion because the production of biofuel, mass electricity, methane, plastics and pesticides from microalgae would seriously reduce these four increasingly significant threats.
This would seem to deserve a major reflection and state coordination between all the actors for a real scientific, technical and pedagogical efficiency. It would be necessary to designate a national coordinator with political experience and environmental sensitivity such as, for example, Nicolas Hulot, Delphine Batho, Audrey Pulvar or a similar profile.

Provide full-scale educational tools to train in renewable energies (RE) and, in particular, in the ultra-short carbon cycle.
It is no longer normal that students in technical high schools, apprentices, workers in training, unemployed people in integration, engineering students, students, PhD students and researchers do not have full-scale tools for practical training in renewable energies (RE), including the ultra-short carbon cycle, whereas training through practice is the most effective and the educational tools can work very well in real life, i.e. without operating costs.
Such an educational tool – in the form of a collection and processing platform – can receive forest and organic materials and process them into energy sold on its market, as well as the by-products (e.g. compost).
If the project is well set up, there should be no operating costs. Moreover, the investments will be financially covered by already existing and often little used public budget lines, as well as with public/private partnerships because RE interests many investors (6).
The State must be the spur and coordinator so that local authorities – communes, departments or regions – can set up such a multi-RR educational platform in partnership with universities, high schools and schools, integration structures, companies, etc. (7). A slightly more detailed note is available on this subject (7).

4 “Energy and development without increasing the greenhouse effect” from August 26, 2003 to June 2012

5 See, for example, biodegradable plastic produced from macro-algae by a similar process: but see also the many leads on this site.

Another track to study: making batteries from plant carbon like those made from cotton (look for “cotton battery”). The CUC could be a huge and inexpensive deposit for this vegetal carbon.

6 Prices for the multi RE Platform

7 “Presentation of the project to create a multi-renewable energy platform in Toul”, April 2, 2009.

The Four Worst Threats to Humanity (1)