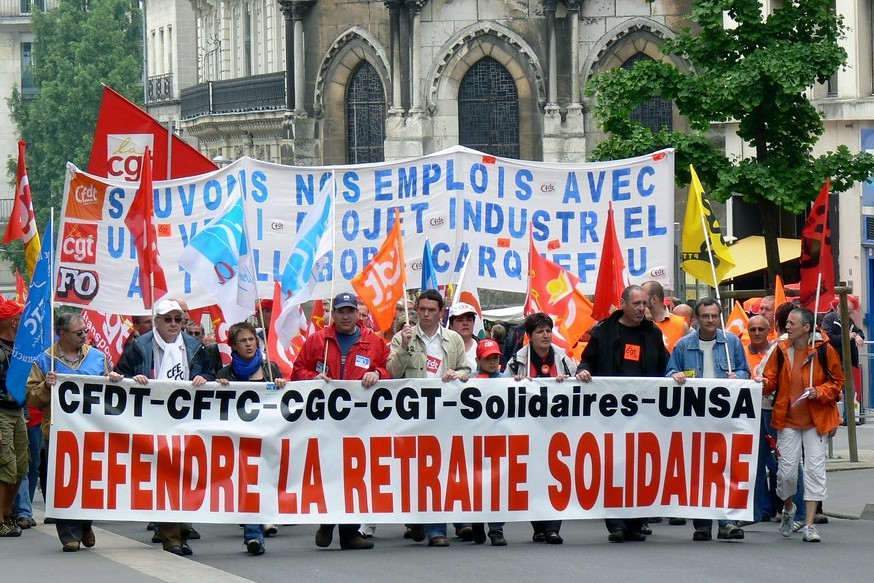 The trade union front against pension reform intends to make December 5, 2019 a day of mobilization against the executive. But then what? Anything is possible… even the worst.

Everyone expects Thursday, December 5, 2019 to be a day of hardship. There are so many calls for a strike that it is to be expected that the country will almost completely paralyse. Rail, road, air: nothing will work normally.
Disruptions are announced to SNCF and RATP. The truckers’ unions will join the movement with, no doubt, snail operations. The same goes for ambulance drivers, movers, taxis. Strike also announced to Air France for pilots, stewards, hostesses but also air traffic controllers.
The public service will not be left behind. Notice of strike at the National Education Department, at the public hospital. Emergency doctors, who have been on strike for several months, will be on the street along with the nurses. The fire brigade and the police (see the”last summons” of the police unions opposite) announce”actions”. The students will be associated with this day. The immolation of a student in Lyon, two weeks ago, highlighted the precariousness of student life.

More surprisingly, the “dead justice” day launched by the National Bar Council (CNB). To all this, we must add the resentments and resentments of all those who, for the past year, have been demonstrating every Saturday with the Yellow Vests and who, too, are worried about their future and therefore about their retirement.
The common denominator of all these dissatisfactions is the point pension system desired by the government from 2025 onwards. In short, the executive plans to merge the 42 existing regimes into a more equitable point system. If the intention is good, the implementation is more delicate. Because everyone feels fooled and loses benefits that have long been acquired.
Hence the convergence of struggles advocated by many unions. However, a single day of strikes and demonstrations will probably not be enough to bring the government to its knees. Hence the call for a renewable strike announced by the trade union organisations.

Whatever the success of the day of December 5, there is a good chance that not everything will return to normal the next day. Because the government is not (yet) willing to abandon its pension reform.
Emmanuel Macron and Edouard Philippe are concerned about the turn of events. They have made concessions in an attempt to defuse the conflict, which is shaping up to be very difficult. So far without success.
All over the place, the growl is swelling. Even in the countryside. More than 1,000 tractors will converge on the capital on Wednesday, November 27. Farmers intend to denounce free trade agreements (such as AETE), distorting imports and the recent Egalim law (for balanced trade relations in the agricultural and food sector and healthy, sustainable and accessible food for all).

From north to south, from east to west, the French economic fabric is disintegrating. “This torn France must be stitched up”, exhorts the President of the Republic in front of the Congress of Mayors.
But isn’t it too late? Two and a half years after his election, Emmanuel Macron finally discovered the harsh reality of an old country that is collapsing every day under the blows of globalization. Companies are closing one after the other, jobs are disappearing by the thousands, poverty is increasing every day, the flow of migrants is increasing among the homeless….
In this worrying context, the social discontent is not about to end. The actions planned for 5 December 2019 have a good chance of being renewed.
Merry Christmas anyway.