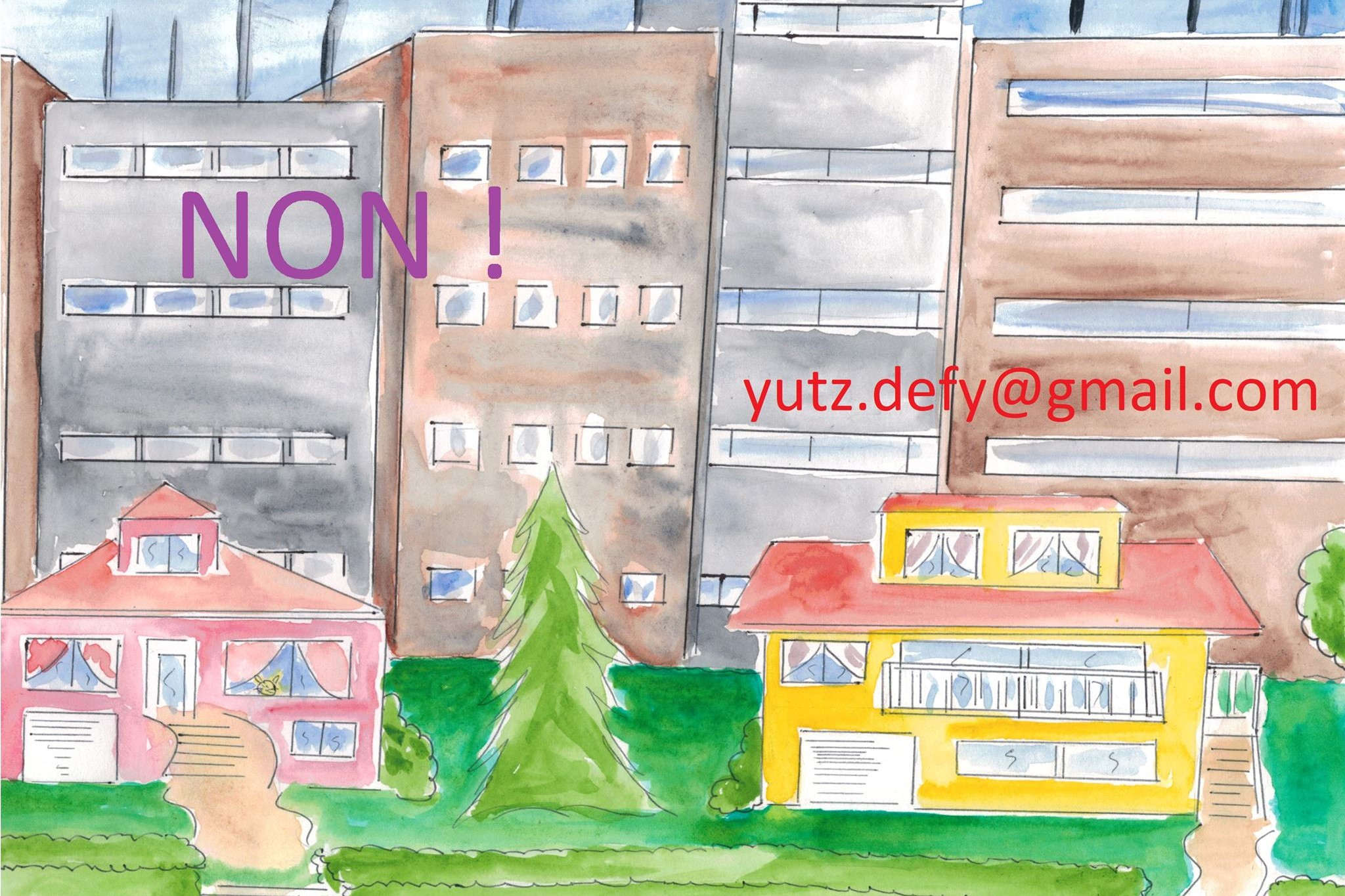 Yutz: against delirious concrete (drawing by the collective DEFY)

Illegal taking of interests, corruption, favouritism, clientelism or sexual favours: the public prosecutor’s offices are overwhelmed by complaints and other “reports” of alleged offences against elected officials.

Any election campaign is conducive to a large unpacking of dirty laundry that is not necessarily washed in the family. The municipal elections of this year 2020 are no exception, even if there is an inflation of “reports” to the public prosecutor, the regional audit office, anti-corruption associations and the press.

In Yutz, a town of 16,000 inhabitants in the suburbs of Thionville (57), a collective called DEFY (Défendons Ensemble le Foncier Yussois) is opposing the construction of 544 housing units, including 19 buildings in the Stockholm district, on the edge of a suburban area. Bernard Aubin took the lead in the mutiny because, he says, “there are other building zones but the town hall refuses to build the buildings there, we don’t know why. »
The collective, which is also opposed to “a delirious concreteization” in Yutz but also elsewhere, has filed an appeal against the PLU (local urban planning) before the Administrative Court of Strasbourg. And is campaigning against this crazy project via social networks and the press. The mayor, Bruno Sapin, who is accused of having caught his constituents off guard, promises explanations and a possible modification of the PLU. This may not be enough.

In the nearby town of Thionville (40,000 inhabitants), the situation is rather incongruous. “The real estate war has been declared” recently titled our colleagues of the Republican Lorrain. A developer, suspecting “collusion” between elected officials and local professionals, has decided to file a complaint in 2019. Suspected allocation of building permits, advantageous sale of land, justice has its work cut out for it.
There is also talk of a “big case” involving elected officials that should soon be revealed. This scandal would not only concern Thionville but the whole of the Moselle.
How do we know this? It is a newcomer in the Thionville campaign who announces it publicly. “A scandal that could splash the team of the outgoing mayor,” says Patrick Luxembourger. The latter has decided to run in disaster for the votes of the Thionville inhabitants and is seen as “a right-wing appeal”.
The case of Patrick Luxembourger is rather comical. Mayor of the neighbouring commune of Terville for three terms, Patrick Luxembourger decided to give the scarf back to Marianne to devote himself to his professional life. But the scandal he predicts – and of which nobody knows anything – would be likely to reach the mayor’s team. Hence his candidacy.
Thus, four lists will compete: that of outgoing mayor Pierre Cuny (Cuny 2020), that of former mayor Bertrand Metz (Ensemble faisons Thionville) and that of Guy Harau’s Greens (Thionville en Mieux). And now, therefore, the list of Patrick Luxembourger (Thionville, le renouveau).

In Tomblaine (8,800 inhabitants) in the suburbs of Nancy, a collective of citizens is watering wide. It has just sent e-mails, texts and photos “of what everyone knows in Tomblaine” to the President of the Republic, the Interior minister, the Justice minister, the Republican East, the Anticor association, the newspaper La Semaine, Médiapart, Le Point and infodujour!
The collective denounces the “disturbing things” of mayor Hervé Féron who “would promote real estate” of his own son on Facebook. And he is said to have hired his daughter-in-law, a civil servant at the town hall, as “responsible for public contracts”! The collective suspects a conflict of interest. And let it be known urbi et orbi. But especially to the public prosecutor.