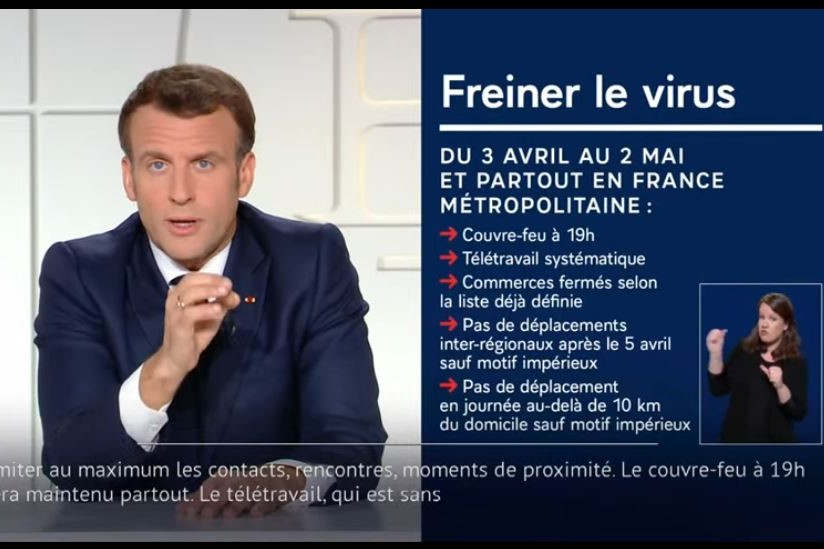 The President of the Republic calls on the French to make an extra effort to keep the epidemic under control. He also suggests that the end of the tunnel will be reached by the end of May 2021 with a gradual return to normal and an acceleration of vaccination for all.

Due to a worsening of the health situation in France, the President of the Republic has decided, this March 31, 2021, to take new restrictive measures “to continue to protect life”. Thus, the measures of reinforced vigilance in force in 19 departments (closure of certain businesses, travel limited to 10 km from home) are extended to the entire metropolitan territory for four weeks, starting Saturday. French people who wish to isolate themselves can do so during this weekend, the sanctions will be reinforced to limit gatherings.

The choice of responsibility

However, the most radical measure concerns the closure of nurseries, schools, colleges and high schools for three weeks. It is, he says, “the choice of responsibility”. The spring school vacations are unified throughout France from April 12 to curb the Covid-19 epidemic. The week of April 5 to 12, “classes for schools, colleges and high schools will be at home,” said the head of state. Except “for children of caregivers and some other professions, as well as children with disabilities. This will be followed by a two-week vacation starting on April 12, for all zones, before the start of the new school year on April 26, in physical education for schools and in distance learning for high schools, which will reopen on May 3.

A note of hope

The president, who knows how impatient the French are to finally get back to normal life, punctuated his speech with a note of hope: “From mid-May, we will start opening again, respecting certain strict rules,” he said. We will authorize, under certain conditions, the opening of terraces and we will build, between mid-May and the beginning of summer, a progressive reopening calendar for culture, leisure sports, events, our cafés and restaurants”. In the meantime, the aid measures for companies and employees will be extended.
As for vaccination, we need to go faster. It will be expanded and extended first to the oldest and then to the youngest. So that “by the end of the summer, all French people over the age of 18 who wish to be vaccinated”, says Emmanuel Macron.