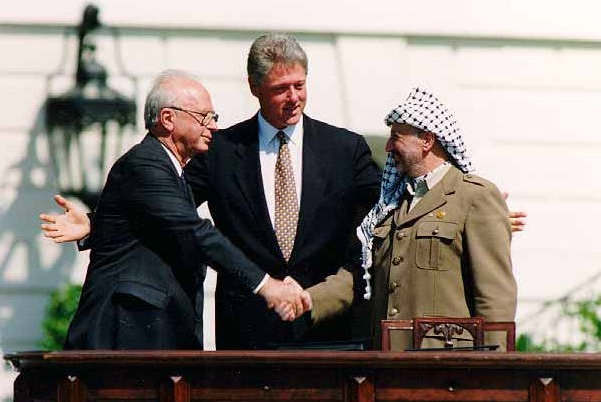 Historic handshake at the signing of the Oslo Accords on the White House lawn, September 13, 1993: encouraged by Bill Clinton, Yasser Arafat extends his hand to Yitzhak Rabin, who takes it after a brief hesitation (Wikipedia)

While the world is witnessing a new escalation in this endless conflict between Israelis and Palestinians which, since 1948, is a problem of territory and law since there are clear but unfulfilled UN resolutions, pro-Palestinian associations are organizing rallies this Saturday throughout France.

The human toll is high: more than 100 dead on the Palestinian side, less than a dozen on the Israeli side. The clashes underway since Monday risk setting the Middle East on fire.
How far away the Oslo agreement is! Twenty-five years ago, on September 13, 1993, Israel and the PLO signed the Oslo Accords in Washington, sealed by a historic handshake between PLO leader Yasser Arafat, Israeli Prime Minister Yitzhak Rabin and his Foreign Minister Shimon Peres. All three were awarded the Nobel Peace Prize a year later.
This agreement led to the creation of the Palestinian Authority, which was supposed to be the precursor of an independent Palestinian state. However, the asymmetrical balance of power led the Palestinians to a dead end. Israel has never stopped colonizing the Palestinian territories. There has never been any serious consideration of giving the Palestinians a country.

“The Day in Jerusalem”

The Palestinians were thought to be resigned to their fate. The events of this week show that this is not the case. Late last week, Israeli forces evacuated thousands of Palestinians gathered on the Esplanade of the Mosques. This was to allow the Israelis to celebrate “Jerusalem Day”, the holiday that commemorates the conquest and annexation of East Jerusalem in 1967. Increasingly violent clashes ensued. At the same time, the Palestinians are also celebrating symbolic events: Wednesday was the feast of Eid-El-Fitr, the end of Ramadan. On Saturday, it will be Nakba Day, commemorating the Palestinian exodus of 1948.

It is in this explosive context that several French associations have decided to organize, this Saturday, in Paris and in several cities of France a large rally in support of the Palestinian people. But the Minister of the Interior, Gérald Darmanin decided to ban these demonstrations fearing serious disturbances to public order. Reason: in 2014, the rally had degenerated into street violence.
Thus, the rallies planned in Paris but also in Lille, Lyon, Marseille, Nancy, Rennes, Saint-Etienne, Strasbourg, Toulouse … are banned by the prefects.
The political class, especially on the left, is against these bans and see it as a provocation.
The pro-Palestinian associations maintain their gatherings.
The interminable Israeli-Palestinian conflict risks to provoke clashes between the Jewish and Arab communities on French soil.