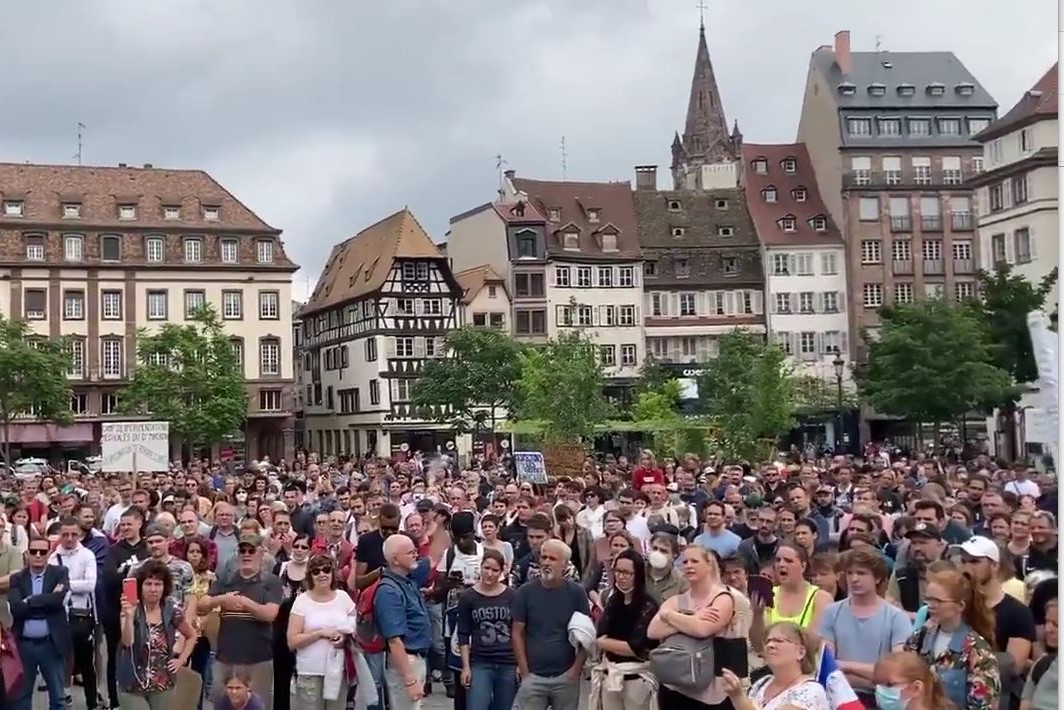 In the name of a certain idea of Freedom, thousands of opponents of Macron’s measures marched in Paris and in many cities of France chanting slogans hostile to the President of the Republic.

“Freedom, Freedom!”, “Macron resign”, “Macron in jail”, “The pass will not pass”, “We are not QR Codes”! From Paris to Marseille, from Strasbourg to Brest, from Lille to Perpignan, hundreds of thousands of people demonstrated against the brutal and uncoordinated measures taken by the President of the Republic on July 12.
Among the demonstrators were health professionals, anti-vax activists, opponents of the “health dictatorship”, but also ordinary French people, young and old, who do not accept such a blatant attack on fundamental freedoms such as freedom of opinion and expression, freedom of movement, freedom of conscience, freedom of religion, equality of all before the law… all of which are undermined by the health restrictions.

“I am taking to the streets to defend these fundamental freedoms,” explains François Baudin, a Nancy resident. President Macron’s plan establishes a two-tier system of rights and freedoms, a system where sub-citizens will be forbidden to move around, to go to the cinema, to the theater, to the stores… A system where others will be allowed to ask you for your identity papers, your vaccination certificate and if they don’t have it, they will risk fines and prison! This is unheard of since 1944.”
François who marches in Nancy is not against the vaccine(s). I don’t have the competence,” he says. But here, it is about our citizenship, our freedom, our rights scorned by this regime that establishes the division between us. It is ultimately about our future: do we want to live in a dictatorship or in freedom, equality, fraternity?”

The political variant of the virus

President Macron’s decisions of July 12, 2021 have surprised everyone, we have written about it several times here. Starting with the government and the ministers involved in the measures to restrict access to shops, businesses, and even in health care facilities, access conditioned by vaccination and health pass.
With the motive of fighting against the rebound of the epidemic, the Delta variant has quickly become a political variant that is causing a stir even in the ranks of the majority. If the bill providing for the extension of the health pass will be voted without surprise by the parliamentarians, the Council of State will still have to give its opinion. And the LR and Centrist groups in the Senate have already announced that they will refer the matter to the Constitutional Council.
In an article published by Le Figaro, the philosopher and European deputy François-Xavier Bellamy and the centrist senator Loïc Hervé, (who are not awful leftists), consider that “the infringement of freedoms is disproportionate to the objective pursued.”
They write: “Opposing the health pass is not the same as being anti-vaccine (…) The fact that access to the public space is conditioned to the presentation of health data is a historical break. (…) If we opposed several months ago the creation of the health pass by the European Parliament and the French Parliament, it is because we absolutely refuse the world that is taking shape before our eyes.”

“The dictatorship on the march

Analysis shared by the thousands of demonstrators who refuse “the dictatorship on the march” imposed from above, for four years, without consultation. By flouting the representative democracy of our country, by short-circuiting ministers, government and intermediate bodies.
Let there be no mistake: this affair is not a simple rebuff. It is a groundswell against a policy that is deaf and blind to the aspirations of the people. If it continues, it will end badly!