It’s hard to argue for mass vaccination against Covid-19 when you see what’s happening in Israel. Here is the thought that one of our readers sent to us.

On August 30, 2021 on C à vous, Olivier Véran talked about Israel, “a pioneer country in terms of vaccination” and to be followed. They are therefore used as guinea pigs for the rest of the world. So where are we in Israel, cited as a model to follow at the beginning of vaccinations. Can we use this model to draw conclusions about what to do and what not to do, or should we continue to ignore observational data in favor of statisticians and modelers?
Here is the curve of cases in Israel, since the beginning of the epidemic. It is clear that, vaccination or no vaccination, there is no effect, if not worse, the more people are vaccinated, the stronger the waves are: 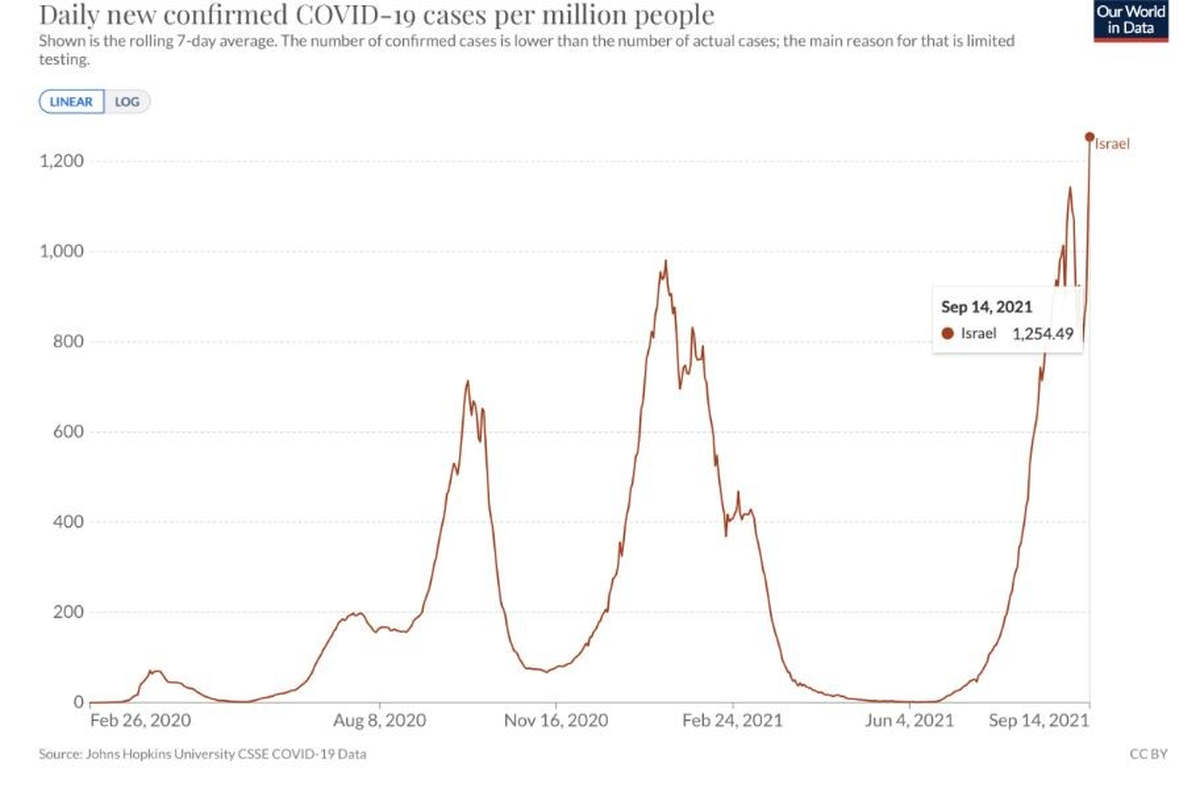 Is it a total failure of the vaccination to contain the epidemic, to obtain this famous collective immunity that the Indians obtained at 67.6% with the disease and the early treatments?
What are the possible biases in the reading of this curve? We have explained here that the curve of cases may not be the best index to compare, because it depends on the tests: the more you test, the more cases you have. So here is the test curve. It is more or less superimposable, so some will say that it is not worse, but that the last 3 waves are more or less the same because of the more tests. 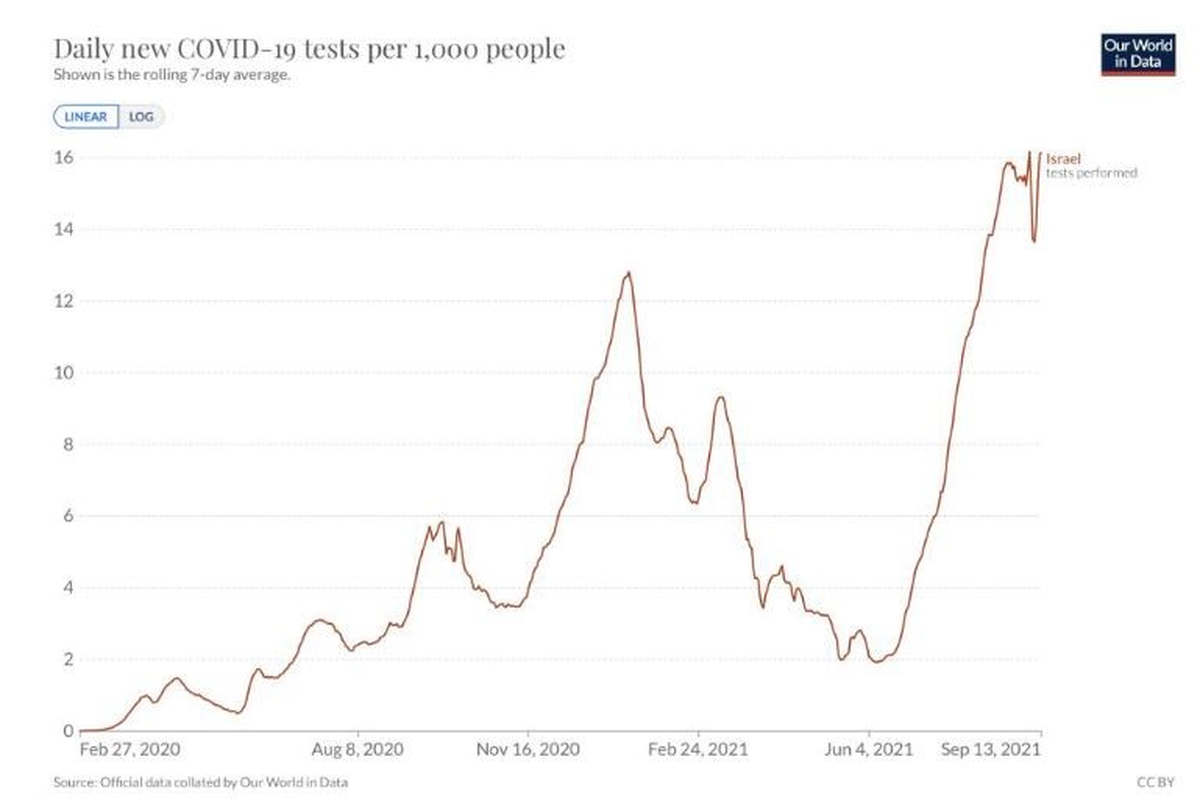 If these last 3 waves are more or less identical, let’s point out that the first one was without vaccines or treatments, the second one half vaccinated, the last one very vaccinated. This always confirms the low efficiency of vaccines, even in a country that is doing everything possible. It is the same in Iceland, which is more vaccinated than Israel: the results of vaccination are not obvious. 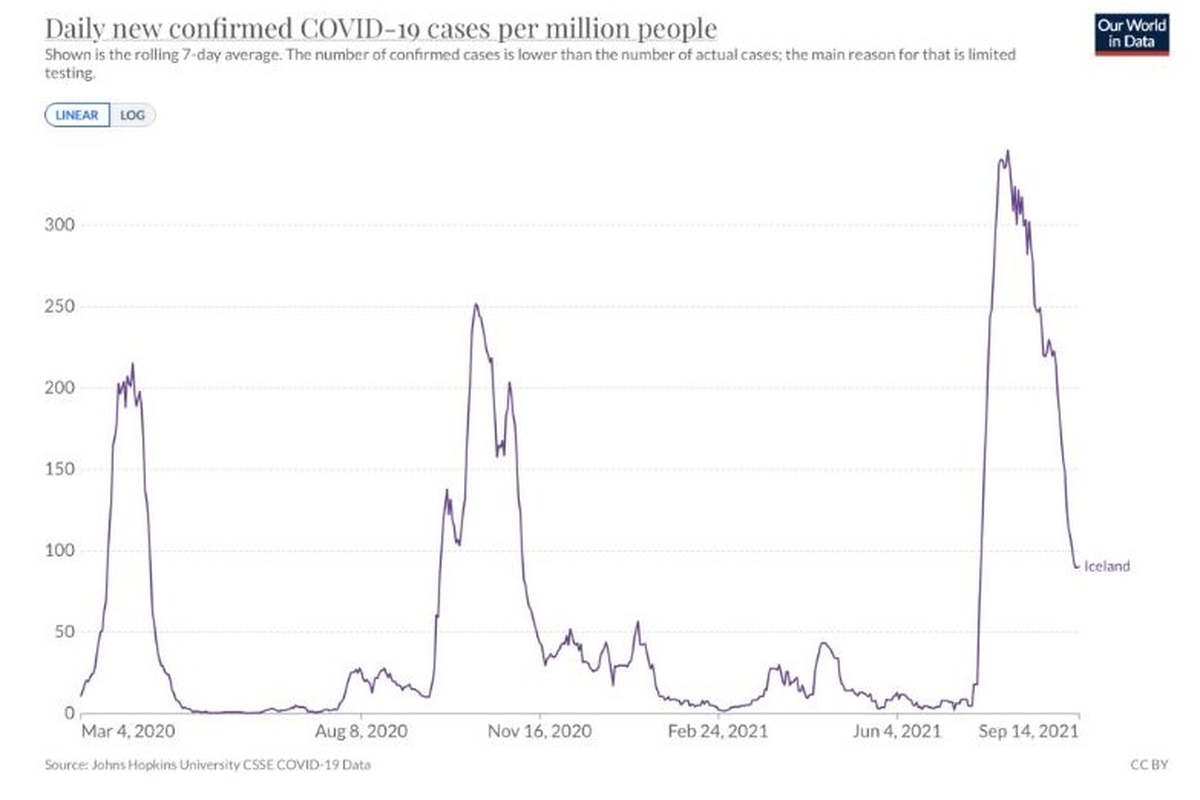 These findings are not unique to Israel or Iceland, 3 papers from the CDC, Oxford University and the UK Department of Health also find this. Why doesn’t it work? The first reason is that we vaccinate for the delta, with a vaccine made for the Wuhan strain, the second, is an immunity that wears off quickly over time, as for seasonal flu.
If we had only one strain, non-mutant and a lasting immunity, as for the other diseases benefiting from vaccines, the result would be totally different. The laboratories and the authorities knew it from the beginning, because it is specific to the coronavirus.
So should we continue to vaccinate in the face of this failure? Can one more dose correct the failure of the two doses after 5-6 months? However, the WHO brakes as it can (like a pyromaniac fireman) this third dose, because of the unknown risk of the ADE phenomenon, not certain, but being able to be serious, as it was for the vaccine against the dengue, or in the infectious peritonitis of the felines, due to another coronavirus.

Is there something we are not being told?

At the beginning, we were told that we would be 96% protected. We don’t talk about it anymore. Then we were told that we had to vaccinate everyone, including children, even though they were not affected by the disease, in order to obtain collective immunity. We don’t talk about it anymore. It is now admitted that even if you are vaccinated, you catch and contaminate just as much! We are then told that the vaccine is only to avoid severe forms of the disease, while at the same time we are told that children who do not have severe forms of the disease must also be vaccinated. For adults, the only ones likely to present severe forms are those over 60 years old and with comorbidities, so why force the others? Are we still being kept in the dark?
Does it really protect against severe forms, and at what level? The best way to know objectively is to follow the mortality, which does not depend on the number of tests.
Here is the death curve for Israel : 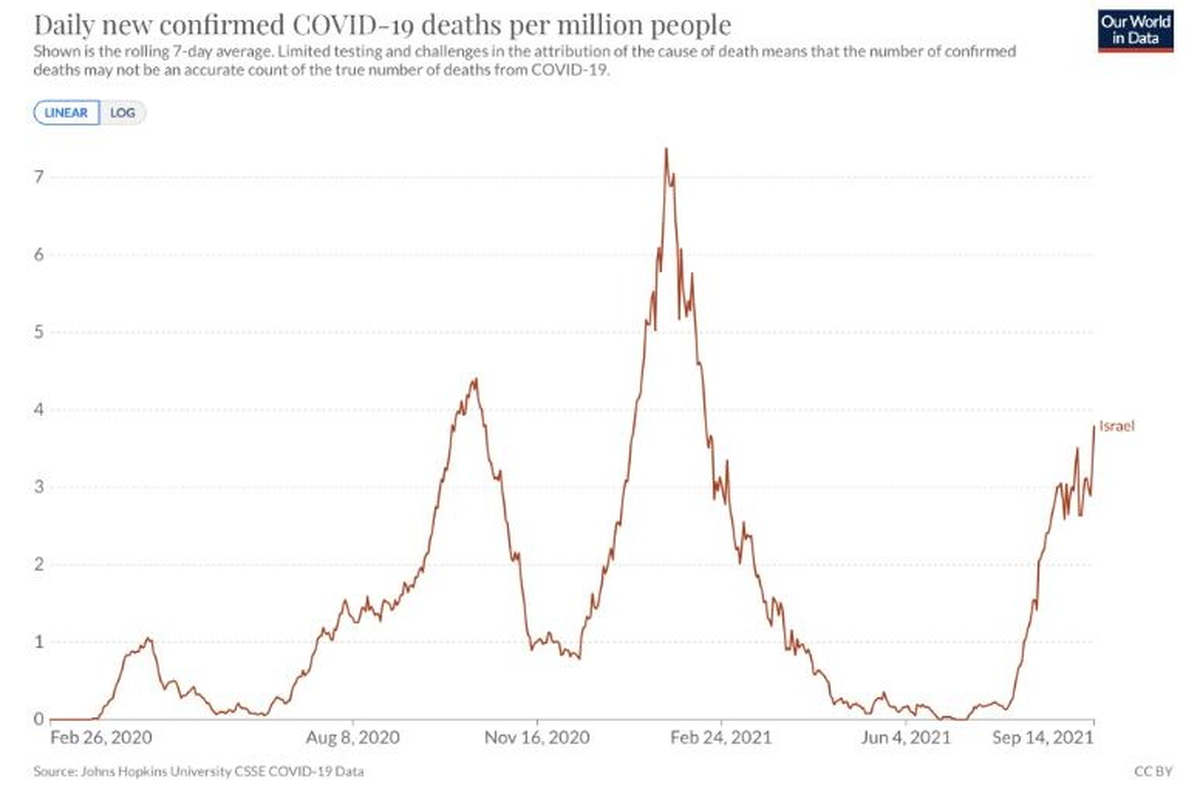 Let’s compare the two curves of September, 2020 and 2021, the first one without any vaccine and the last one, more vaccinated. The one at the beginning of the year is disturbed by vaccination, which seems to make things worse at the beginning (doctors know that they do not vaccinate in epidemic periods), and there is also the seasonal flu, which may have had an effect. We then noticed a decrease in deaths of 15%. This may change (more, not less) at the present time.
Are biases possible? The first is the variant. If the delta is 15% less harmful than the delta, there is no improvement, if it is more harmful, the improvement is greater than the 15%. What is the difference? It is difficult to know, because the difference is relatively small. The British compared the mortality of the different variants in a report at the end of August. In people over 50 (too few deaths below that age to be significant), this gives 4.8% for alpha, 4.3% for beta, and 2.2% for delta, half as deadly as its predecessors.

To be objective, it is complicated by the fact that these figures are global, and it would be necessary to separate the vaccinated from the non-vaccinated. However, it would be wrong to attribute most of the deaths to the non-vaccinated, who are fewer and fewer in number. There is no reason why this category should die more than before!
And there, everyone will find his account, some will see the glass half empty, others half full. The latest Israeli figures show that 390 people vaccinated with 2 and 3 doses died between August 10 and September 8, i.e. 58.5% of the deaths, whereas these vaccinated people represent 62% of the population. This difference is not very significant. On the other hand, if we take a closer look, the vaccine has the advantage. 277 deaths out of 3.45 million non-vaxed people, versus 390 deaths out of 5.65 million vaccinated people. 8 per 100,000 versus 7 per 100,000, we find the 15% of our curve. On the other hand, if we only look at the over 60s, where the majority of deaths and the minority of non-vaxes are found. Advantage vaccine, for this category only.

Biases? We know them, it is the one of the little recorded statistics for the vaccinated when it goes wrong, we often die of coincidences unrelated to the disease or the vaccine … There is also the fact that vaccinated one dose and vaccinated two doses of less than 15 days are counted in non vax. You develop a Covid or a vaccine disease 8 days after your dose and die from it, you are
are classified as non vax. To the numbers in the latest data, we should add deaths due to vaccination, most of which are disputed. In the under-60 age group, it is enough here to add only 15 (there are more) to reverse the trend, with the benefit/risk becoming negative. This is what the Australians seem to be observing, with their adverse event database reporting 487 deaths after vaccines, for
167 deaths from disease since vaccinations began.
The UK figures are roughly similar to Israel’s regarding the vaccine benefit.
However, I am not sure that the Seychelles, which is almost 100% vaccinated, can say the same thing. Here is their vaccination curve, cases and deaths since January. 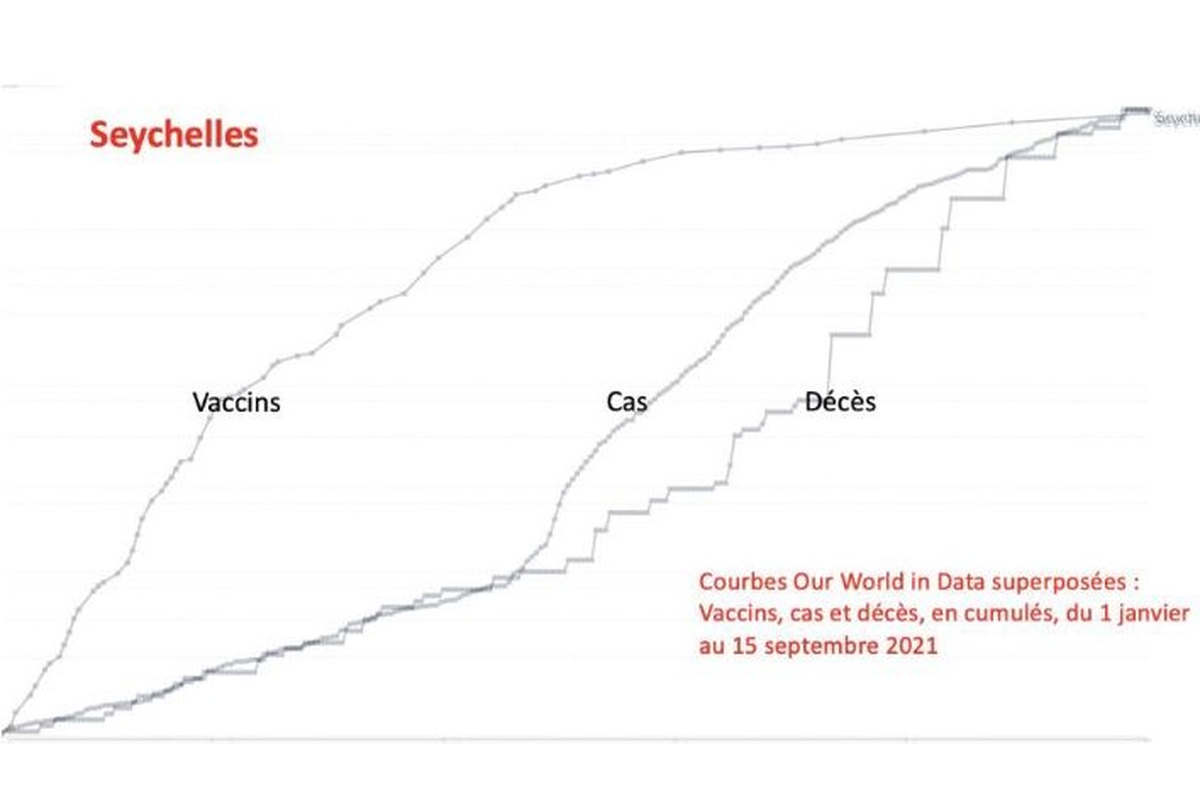 Vaccination started the first week of January, cases appeared at the same time, deaths followed, all perfectly parallel. Yet, before vaccination, Seychelles had no problem with Covid, as shown by the curve of cases since early 2020. 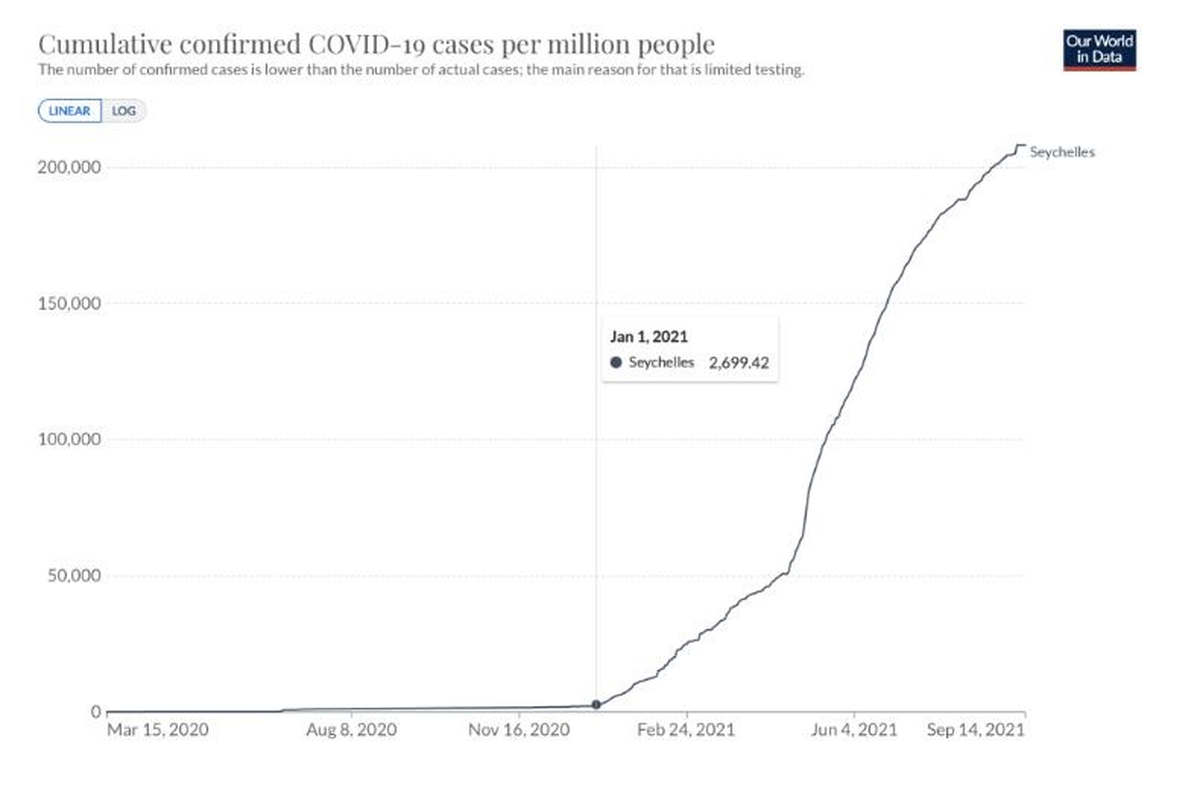 As you can see, it is difficult to form an opinion, as everyone can have a different and argued opinion.
However, some certainties are not very debatable: rapid inefficiency of the Wuhan vaccine on the delta variant (and worse for the mu to come?). Vaccinated, we still catch (as much?) Covid, and we transmit as much. In some sensitive places, if you are vaccinated, you will be asked for a test, which is a justified precaution. Collective immunity impossible.
The figures seem to show the uselessness below 60 years old, with a benefit/risk factor that seems to have been reversed, because originally evaluated considering a 100% efficiency, long-lasting, with few known side effects. Positive risk benefit beyond 60 years of age with comorbidity, which if it does not prevent the disease, could divide mortality by 2. To be compared with the very superior efficacy of Ivermectin + Azythro or Doxy on this population, observed in two French publications (P Loué and C Bernigaud) and more generally in the study requested by the WHO, where the raw analysis of the results reported by the authors shows a decrease in mortality of 75%.
There is a rule in medicine, between two treatments, with equal effectiveness, always choose the less risky. It is still necessary to have this freedom of choice, and to demand it.