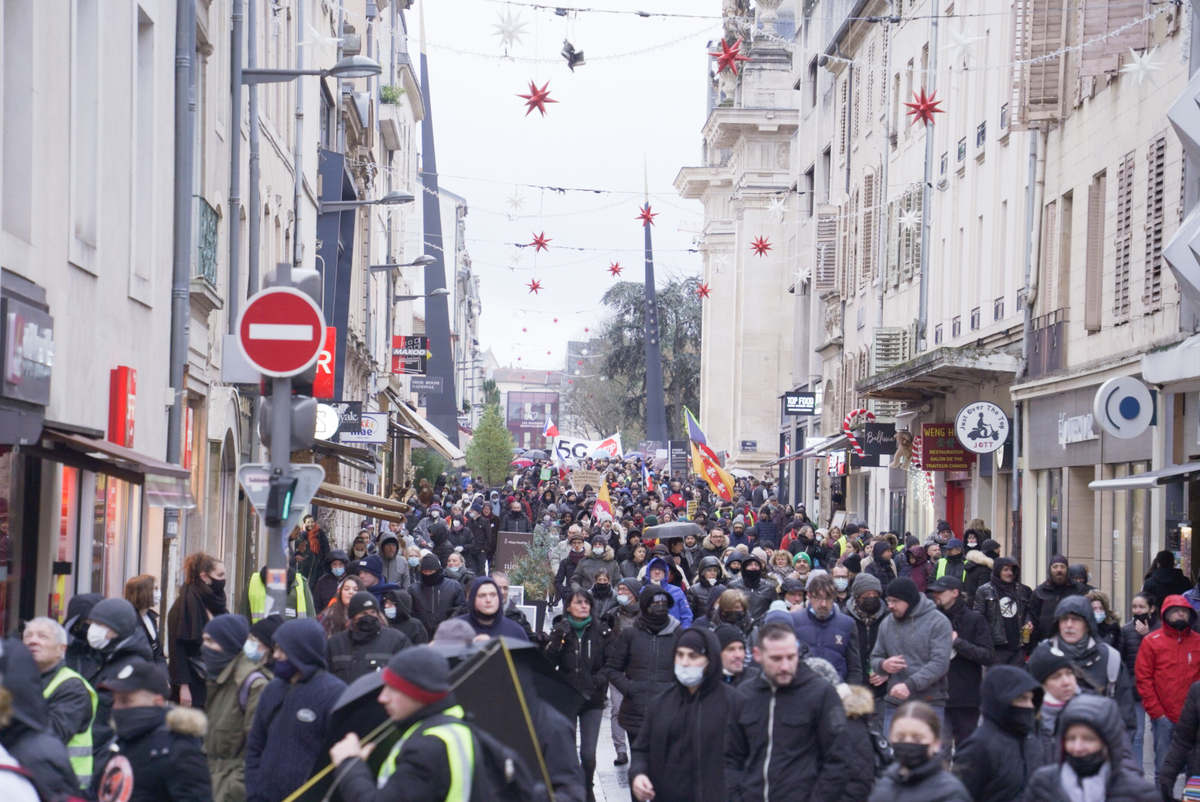 In Paris, as in 140 cities across France, demonstrators braved the rain and cold to say “F…” to the government’s health policy and Emmanuel Macron’s indecent remarks. It doesn’t look good.

How many people? The question is asked at each demonstration and the figures of some are not those of others. Beyond the battle of numbers, what is certain is that there were many, tens of thousands, on Saturday, January 8, 2022, despite the cold and the rain, to beat the pavement in Paris and in 140 cities of France, against the vaccine pass, against the absurd policy of the health authorities and against the unworthy words of the President of the Republic.
Because he wants to “piss off” the non-vaccinated “to the end”, relegating a part of the French people to second-class citizens, Emmanuel Macron has turned a part of the opinion against him, vaccinated and non-vaccinated. This does not bode well for him less than 100 days before the first round of the presidential election, on April 10, 2022. They let him know this Saturday, January 8, almost everywhere in France.

Police officers in the procession

In Paris, if several rallies were organized against the vaccine pass and against Macron, two are particularly noteworthy.
A first procession organized by Florian Philippot and his party, Les Patriotes, left from the Palais Royal at 2pm in the direction of the Place Vauban. Umbrella for some, hood for others, they were very numerous to take up the traditional slogans “Even if Macron does not want it, we are here, we are here … ” (well-known tune). More explicit signs: “Fuck Macron”, “Manu, don’t touch my kids”. In the crowd, Bruno Attal, national secretary of the France Police-Police officers union was angry: “The police are not there to annoy the unvaccinated but to protect the French. Macron would do better to piss off the dealers”.
A second procession, also very dense, was organized by the Yellow Vests and various personalities. Departure from the place of Catalonia. On the way, some clashes with the police. Tear gas on Boulevard de l’Hôpital. Along the way, a European flag was dismantled, alluding to the controversy of the European flag that was flying under the Arc de Triomphe in Paris, before being removed.

Rumble in Montpellier and Nancy

In 140 cities in France, people demonstrated to castigate Macron “this dictator in short pants” according to a demonstrator in Toulouse. In Marseille, several thousand people took the start of the procession formed on the Old Port. In Lyon, Toulouse, Mulhouse, Colmar, Strasbourg, Brest, Nantes, Lille, Clermont, Metz, Nancy and many other cities in France, hundreds, thousands of demonstrators haunted and shouted slogans hostile to the President of the Republic.
In Montpellier, the demonstration was punctuated by some incidents and the police had to use tear gas grenades in the Place de la Préfecture. In Nancy, between 800 and 1,000 people demonstrated at the call of the Bloc Lorrain, starting from Place Maginot. Some clashes with the police on rue Saint-Jean. A policeman, hit by a projectile, was injured and had to be taken away by the firemen.
In short, a Saturday of mobilization as we have known in the summer of 2021. And which could give some new ardor to the Yellow Vests and to all the anti-vax, anti-pass and other anti-Macron in the approach of the elections.