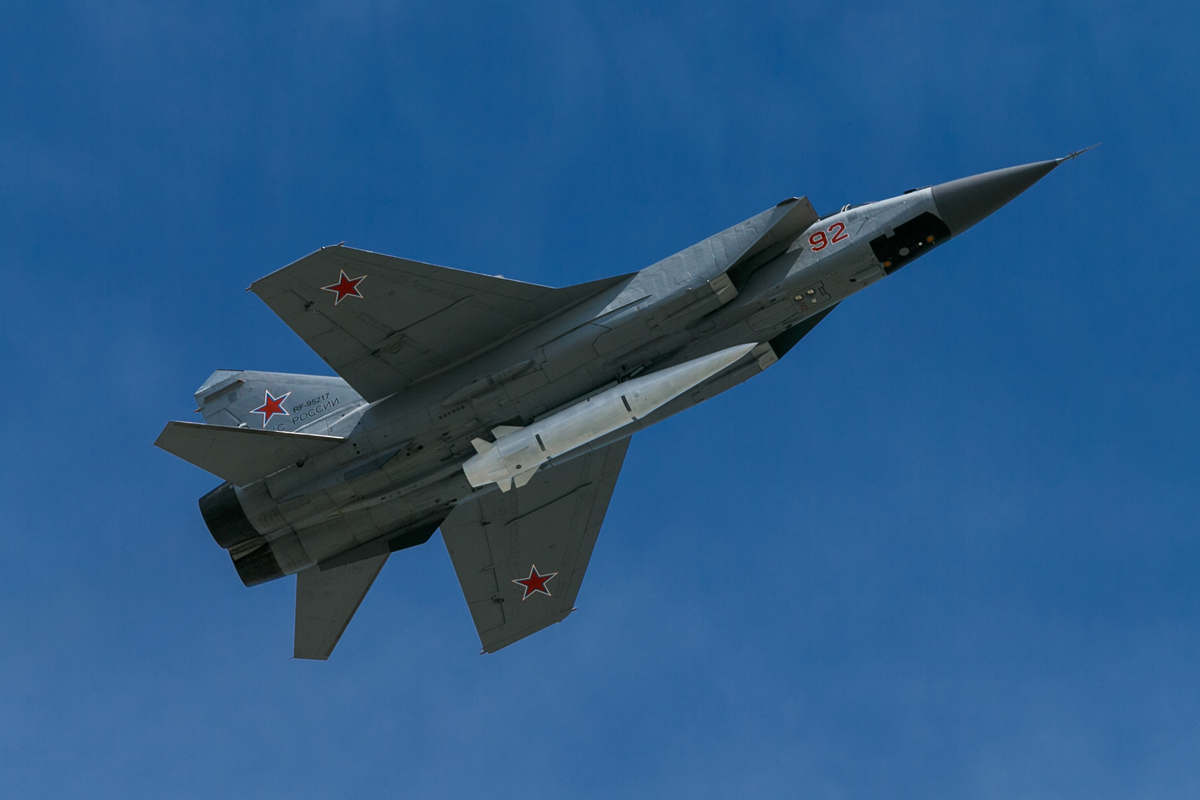 Kinjal air-to-ground hypersonic missile placed under a Mig-31K for the Victory Day parade on May 9, 2018. Mil.ru, CC BY 4.0 via Wikimedia Commons

Officially, no. There is no declaration of war against Russia. In practice, yes, since we are sending arms to Ukraine and participating in the “economic war”. Can Russia turn against us ?

Vladimir Putin has announced the color. In his meeting with Emmanuel Macron on February 7, the master of the Kremlin made no secret of the fact that he could, if necessary, use nuclear weapons. He repeated this on Sunday, February 27, saying, “I order the Minister of Defense and the Chief of Staff to put the Russian army’s deterrent forces on special combat alert.”
It was the French foreign minister who responded to him on Thursday. Interviewed on the set of TF1, Jean-Yves Le Drian stressed: “I think that Vladimir Putin must also understand that the Atlantic Alliance is a nuclear alliance.

Russia has a military arsenal of more than 6,000 nuclear warheads, compared to 5,500 for the United States, 350 for China and 290 for France. With its hypersonic missiles, Russia is able to strike anyone, anytime and anywhere in the world.
Since Putin’s statements, the situation has evolved. The severe sanctions taken against Russia by the Western camp and the irresponsible words of the Minister of Economy, Bruno Le Maire, declaring “total economic war” on Russia, have contributed to strengthening the Kremlin’s determination, as the former president, Dmitri Medvedev, implied when he spoke of “real war” (against France?).

In fact, the Kinjal hypersonic missiles deployed in Kaliningrad can reach any European capital, as the magazine “Zone Militaire Opex 360” points out. The magazine “Zone Militaire Opex 360” points out that on February 8, 2022 “a video showing the arrival in the enclave of Kaliningrad of a MiG-31K fighter, carrying the hypersonic missile Kh-47M2 Kinjal, was broadcasted on social networks. This is unusual, as this aircraft is notably in use by two units of the Russian naval aviation, one based in Monchegorsk [Northern Fleet], the other in Yelizovo [Pacific Fleet].”
According to a good connoisseur of these weapons, “the Kaliningrad missiles would take less than 10 minutes to reach France and a little over an hour to reach New York without anyone being able to intercept them.

The opening of the missile silos

On the Western side, where Europe and NATO are blithely confused, who could trigger the nuclear “alert”? Europe has placed itself under the military umbrella of NATO. So it is America alone that is capable of acting.
Deterrence is a balance of power between belligerents,” confirms our informant. It implies being able to react with nuclear fire within a few minutes if the enemy decides to attack.
Now, only satellite means in the hands of the United States allow to see that “the silos” of missiles have just opened. There is therefore little time to put aircraft and submarines on alert to respond to the attack. So to let him know that he will be vitrified if he continues his disturbing maneuvers.
To be able to dissuade an enemy from a nuclear attack, you need to have an effective warning system, which we do not have,” explains our informant. We need to master the decision-making chain: warning, analysis of the situation, decision-making. Europe does not master it. Putin does. And the United States does not want to be dragged into a world war.

The equation is pathetic. On the one hand, Russia could use the tactical nuclear weapon by first-level strikes. Although cornered by the Western camp, which has unleashed “the financial atomic bomb” against him, Putin has no choice but to succeed. But he should not target NATO countries. Too dangerous for him. On the other hand, he could send one or more missiles to Ukraine, which is neither a member of the European Union nor of NATO.
However, the war between Russia and the West can take other forms: such as a massive cyber attack against institutions or large companies, the sabotage of strategic infrastructures, or the attack of planes and ships.
The fact remains that this affair shows Putin’s limits as a strategist: he has not provided his enemy with a “way out. This is a mistake. He is therefore obliged to succeed in his warlike enterprise. Or disappear.
De-escalation is not on the agenda.