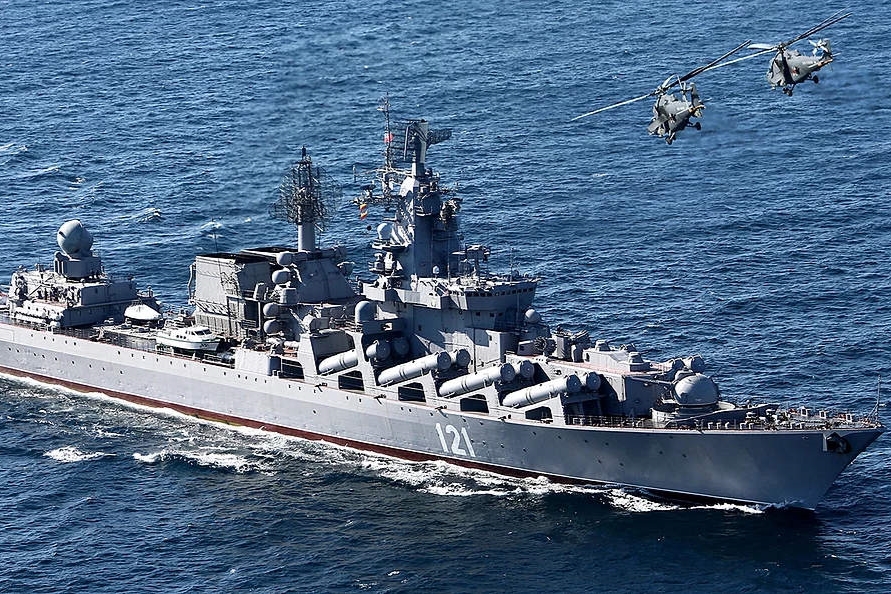 The political-military one-upmanship maintained by the West in support of Ukraine contains all the ferments of a third world war. Russia warns Washington of “unforeseeable consequences”.

On the 52nd day of the war, Russia bombed the capital, Kiev, this Saturday, April 16, 2022, as well as the city of Lviv, in the west of the country, but also Kharkiv, the second largest city in Ukraine, in retaliation for the destruction of its flagship, the cruiser Moskva, hit three days earlier in the Black Sea by two Ukrainian missiles. The Kremlin claims to want to destroy arms factories (missiles and tanks).
The strikes also continue on the besieged Mariupol, where the fighting has intensified around the port and the steel factory Ilitch. But Volodymyr Zelensky knows that Marioupol will fall. Hence his appeals to the West to provide him with massive military aid.

Adding fuel to the fire

The United States has responded favorably to this request. According to CNN “For the first time, the U.S. has agreed to provide Kiev with high-powered weapons that some Biden administration officials just weeks ago considered too great a risk of escalation; including 11 Mi-17 helicopters, 18 155mm Howitzer guns and 300 additional Switchblade drones.” Very sophisticated weapons that worry Russia. And this is in addition to the high-precision weapons already sent to Ukraine with the appropriate instructors.
Moscow was quick to react by sending a diplomatic note to the United States, warning them of “unforeseeable consequences” if the American government continued to supply arms to Ukraine.
The result could be a conflagration across Europe and beyond. With the possibility that Russia, cornered, might use nuclear fire.

“Western states are directly involved in Ukraine as they continue to send weapons and ammunition to Kiev on a massive scale,” reacted Russia’s ambassador to Washington, Anatoli Antonov, in Newsweek. Pointing out that sending more U.S. weapons to the troops could lead to direct conflict between Russia and the United States.”
While Joe Biden seems to be downplaying the threat, the CIA and its analysts are not taking it lightly. The head of the intelligence powerhouse, William Burns, said, “It is possible that President Putin and the Russian leadership are falling into despair given the military setbacks they have suffered so far. So none of us can take lightly the threat posed by the potential use of low-yield nuclear weapons ….”

Water in the gas

While the United States has provided billions of dollars in military aid to Kiev, the German government announced on Friday that it would release more than one billion euros in additional military aid to Ukraine.
It is true that the German head of state, Frank Walter-Steinmeier, has just suffered a diplomatic slap in the face since his visit to Kiev was refused by Zelensky, who felt that Germany was not doing enough to help Ukraine.
We understand the uncomfortable position of Germany whose economic survival depends largely on Russian gas and oil.
On the British side, Prime Minister Boris Johnson and several senior officials are banned from entering Russia because of the economic sanctions imposed by London since the invasion of Ukraine. But also because of the very important British military aid given to the Ukrainian forces that Moscow cannot ignore.

Who benefits from the war ?

The West’s economic sanctions do not seem to be very effective, at least for the moment. We are witnessing a great hypocrisy in wanting to punish Russia economically while continuing to buy its gas and oil which Europe needs so much.
An embargo is reportedly under consideration, but just after the second round of the French presidential election, on April 24, according to the New York Times, because “an embargo on Russian oil could cause a spike in fuel prices and ruin Emmanuel Macron’s chances of re-election”!
How can we not see that the Russian-Ukrainian war is very close to setting the planet ablaze? Only America, far from the theater of operations, is profiting from this conflict which is taking place on European soil. The war allows the Americans to sell their latest generation weapons. They also sell to Europe, Africa and Asia, the agricultural products that are no longer produced in Russia and Ukraine. The embargo on gas and oil will soon allow them to sell their shale gas. Joe Biden wins on all fronts. War is a juicy business.
It is time for the Europeans to realize this. They should stop sending weapons that could one day fall on us. It is time to talk about de-escalation and to start peace talks.
Before it is too late!

US officials tell CNN that Russia has formally protested the US's ongoing shipment of weapons to Ukraine, sending a diplomatic note to the State Department warning of "unpredictable consequences" should the support continue https://t.co/LanH0FOwIH