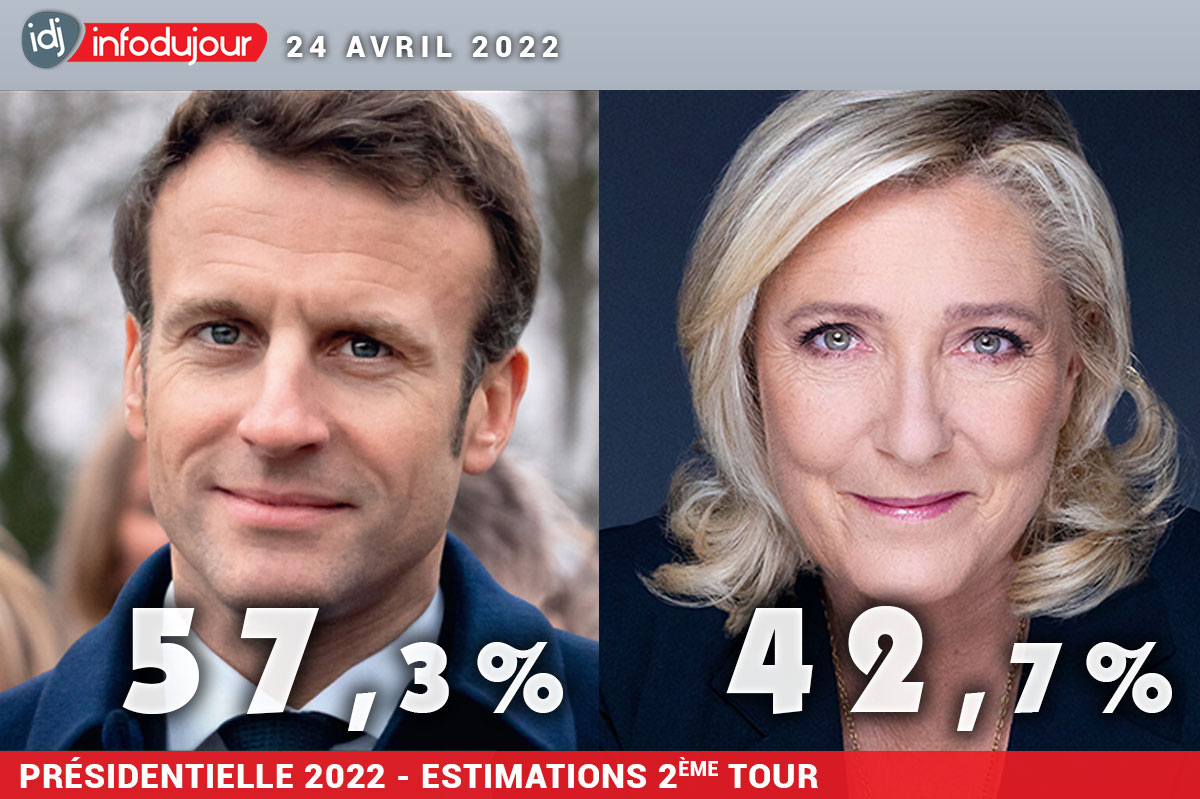 With nearly 58% of the vote (according to initial estimates) Emmanuel Macron is ahead of Marine Le Pen (42%) more widely than expected. The opposition parties are already announcing the third round, on June 12 and 19, 2022.

The numbers are stark. Emmanuel Macron was re-elected president of the French Republic, this Sunday, April 24, 2022. He leads the candidate of the National Rally by 16 points. This is less than in 2017, since Macron had won in the second round by 66% against 33%, but it is still a very clear victory. He is the 4th outgoing president of the 5th Republic to be re-elected, after de Gaulle, Mitterrand and Chirac.
The supporters of the winner gathered at the Champ-de-Mars in Paris where a big party was planned before the speech of the new president (see below).
“It is with ambition and benevolence for our country and for all of us that I can approach these five years: it will not be continuity, but the collective remaking for five years of better for our country and our youth,” he said. Each of us counts more than himself: this is what makes the French people this singular force that I love so intensely and that I am so proud to serve again. Long live the republic and long live France!”
It now remains to be seen which Prime Minister will be chosen and which ministers to lead the government’s policy. A policy that, despite the beautiful victory of the president-candidate, looks complicated in the coming weeks.

“The battle of the legislative

Surrounded by her supporters, Marine Le Pen acknowledged her defeat, recognizing that “the result is in itself a resounding victory.” She added: “I will continue my commitment to France and the French … We launch tonight the great electoral battle of the legislative. I will lead this battle alongside Jordan Bardella, with all those who had the courage to oppose Emmanuel Macron in the second round, with all those who have France at heart.”

Mélenchon: “A third of those registered”

Jean-Luc Mélenchon (who came third in the first round with more than 21% of the vote) also commented on the results of the second round: “Le Pen and Macron represent barely more than a third of registered voters,” he said. Mr. Macron is the most poorly elected of the present of the 5th Republic.” The leader of the Insoumis wanted to have a thought for “the victims” of the sad situation in which the country is. “To all and all I say: do not resign yourself! The third round begins tonight. On June 12 and 19, the legislative elections will take place,” he said, calling on voters to elect him as Prime Minister “to bring about a new future.
Eric Zemmour (fourth in the first round), candidate of Reconquest, called for “the union of the national bloc” to block Emmanuel Macron and Jean-Luc Mélenchon during the next legislative elections.
The third round has well and truly begun.

All the results in France