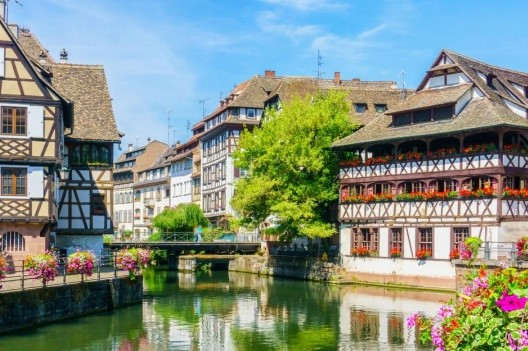 The return of Catherine Trautmann (PS) in the race for mayor of the Alsatian capital will undoubtedly shake up the lines. To the point of dethroning the ecologists on Anne Barseghian’s EELV list?

Strasbourg, is a superb city of 277,000 inhabitants in the heart of the Eurometropolis (491,000 inhabitants). Capital of the Grand Est region, Strasbourg is also the European capital.
The city offers an exceptional quality of life thanks to its many parks and gardens, unique architecture, gourmet restaurants, culinary specialities, theatres and other cultural venues. It boasts the 4th largest cycling city in the world (560 kilometres of cycle paths and lanes in 2017), the 2nd largest banking centre in France.
After two terms in office, the socialist mayor Roland Ries is not standing for re-election. Neither is the president of the Eurometropolis, Robert Herrmann. This leaves the field open to many contenders for the mayor’s office in Strasbourg (65 seats).

The return of Catherine Traumann

The leaders are in the starting blocks. Jeanne Barseghian, has received the nomination of Europe Ecologie les Verts. Chantal Cutajar, deputy mayor, will lead the list of committed citizens. Alain Fontanel, first deputy mayor, received the nomination of La République en Marche, Pascale Hirn is candidate for the UPR. Kevin Loquais for the Strasbourg en commun list, a list initiated by La France Insoumise supported by Génération.s (with Améris Amblard). Hombeline du Parc, is head of the list for the National Gathering after Thibault Gond-Manteaux’s retirement… Catherine Trautmann takes the head of the PS list after the withdrawal of Deputy Mayor Mathieu Cahn. Jean-Philippe Vetter, city councillor, received the Les Républicains nomination.
Catherine Trautmann’s return is unexpected. The current vice-president of the Eurometropole was deputy (PS) for Bas-Rhin, Minister of Culture for Lionel Jospin, MEP, but also mayor of Strasbourg and president of the Strasbourg Urban Community from 1989 to 1997 and from 2000 to 2001. She was beaten to a pulp in 2001 in a triangular match against Fabienne Keller (UMP) and Jean-Claude Petitdemange (dissident PS), her former finance deputy.
In 2007, she will leave the place to Roland Ries and will be elected deputy to the Eurometropole.

Will the people of Strasbourg remember that it is to Catherine Trautmann that they owe the construction of the tramway, the development of public transport and the requalification of Strasbourg as an ecological city?
Until now, in the Alsatian capital, the classic left and the traditional right have been fighting it out. From now on, the EELV Greens, whose list, drawn by Anne Barseghian, is credited with 27% of voting intentions in the first round, according to an Ifop-Fiducial poll for Sud Radio.
Alain Fontanel’s list (LREM) would get 25%, Jean-Philippe Vetter’s LR list 14%, the RN list from Hombeline du Parc 11%. And Catherine Traumann’s list … 9% tied with the list of France Insoumise. The others getting nothing but crumbs.
In the second round, on 22 March, Jeanne Barseghian would win with 40% of the votes in a quadrangular with Alain Fontanel (32%), Jean-Philippe Vetter (16%) and Hombeline du Parc (12%).
But should we believe the polls? In Strasbourg, they were largely mistaken in 2001 when Catherine Trautmann won the municipal elections against Fabienne Keller. The opposite happened.

Is the latest poll for the 2020 elections more reliable? It seems to take into account the environmentalist push in this large university and cosmopolitan city where the population is very aware of the climate emergency.
Confirmation was given in the ballot boxes during the 2019 European elections. The Greens obtained 20.69% of the votes, behind the Republic in March (27.75%) but far ahead of the National Front (12.80%) and especially ahead of the PS (7.7%) and the classic right (7.30%).
A year later, the context has changed. The Yellow Vests and the opponents of pension reform dealt a severe blow to the macronists. So much so that the score attributed to Alain Fontanel, appears very optimistic in the Ifop survey.
The personality of Catherine Trautmann remains. Will she siphon off the voices of the macronists? Will she take on Jeanne Barseghian, much younger and inexperienced in politics? Or will she stay below 10%? We have to wait a little longer to get the answers.
But in Strasbourg, as elsewhere, the municipal elections will confirm that the political landscape will be reshaped in favour of the EELV Greens.