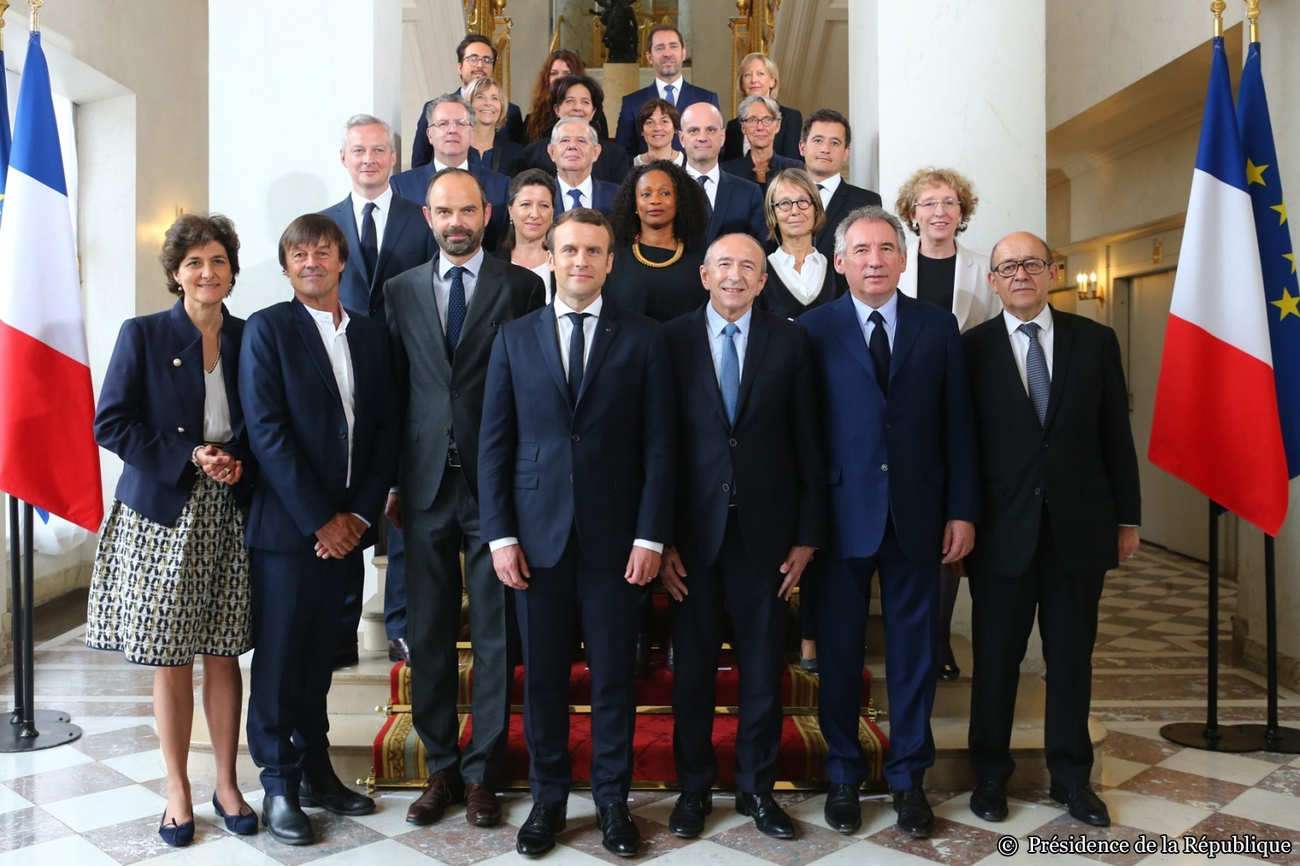 The first government of Edouard Philippe (photo Presidency of the Republic)

With the fall of Benjamin Griveaux, candidate for mayor of Paris and his sudden replacement by Agnès Buzin, Minister of Health, La République en Marche continues its game of musical chairs.

Come on, hop! One leaves, the other arrives, the music continues to the tune of the flonflons. It’s fun in a playground. But it’s not a sign of good political health. For two and a half years now, ministers and other hierarchs of Macronesia have been following one another in the succession of affairs that have plagued the political life of our beautiful country.
Last change in date because of sextape, the candidate of Emmanuel Macron to the mayor of Paris. Trapped or not trapped in a case of videos and messages with sexual connotations, Benjamin Griveaux preferred to throw in the towel for fear of new revelations that would further tarnish his personal image, that of his family and that of his political camp.

Exit Benjamin Griveaux, hello Agnes Buzyn. It took the presidential party 48 hours to find the right candidate. And it was a candidate. It is true that the former Minister of Health has all the professional and political qualities to face two other muses of Parisian political life: Anne Hidalgo on the left and Rachida Dati on the right. We are therefore moving towards a fight between women of character, especially in the second round. A future full of suspense.
Unlike the Prime Minister, Edouard Philippe, who keeps his post to go scrap metal in Le Havre and the Minister of Action and Public Accounts, Gérald Darmanin, who stays at Bercy while going to try his luck in Tourcoing, Agnès Buzin has left her Ministry of Health, leaving others to deal with big, hot issues: the public hospital crisis, pension reform, the coronavirus epidemic…
It was therefore necessary, once again in a hurry, to find a substitute on the bench. It is Olivier Véran who is making his debut on the pitch. Until then a member of parliament (LREM) for Isère, this neurologist doctor comes from the seraglio and is said to be familiar with the difficult issues he will have to deal with. We shall see.

It is becoming a habit in Macronesia to change the titulars by substitutes. On 16 December last, the High Commissioner for Pension Reform (to the Minister of Health, to be precise) Jean-Paul Delevoye was forced to resign after the unfortunate “omissions” in his declaration of interest to the High Authority for Transparency in Public Life (HATVP). He had “forgotten” to report thirteen of his mandates, some of which were paid. Jean-Paul Delevoye has been replaced by LREM deputy Laurent Pietraszewski.
A habit, we tell you. For the list is long of unexpected departures and forced resignations since the arrival of Emmanuel Macron at the Elysée Palace in May 2017.
It all started with Richard Ferrand, Minister of Territorial Cohesion. A month and two days after his appointment, he was forced to resign in June 2017 after revelations in the press about an alleged conflict of interest when he was president of the Mutuelles de Bretagne. After a period of purgatory, Richard Ferrand will succeed de Rugy at the perch of the Assembly.
Two days after Ferrand’s resignation, it is François Bayrou, Keeper of the Seals, Minister of Justice, who will resign on 21 June 2017. He is threatened with indictment in the case of the alleged fictitious jobs of the MoDEm. This will be done a few weeks later.

Same punishment for the Minister for European Affairs, Marielle de Sarnez, and Sylvie Goulard, Minister of the Armed Forces, caught in the same crevasse. The replacements are Nicole Belloubet (Justice) Florence Parly (Defence) Nathalie Loiseau (European Affairs) who will in turn be replaced by Amélie de Montchanin after her poor performance at the 2019 European Championships.
Nicolas Hulot was Minister for Ecological Transition. But on 28 August 2018 he threw in the towel, without warning the President of the Republic, believing that lobbies have too much influence at the Elysée Palace.
He was replaced, still in a hurry, by François de Rugy, then president of the National Assembly. But de Rugy, in turn, had to resign after revelations of his lavish lifestyle while he was perched at the perch of the Assembly. Lobster indigestion, no doubt. He was replaced by Elisabeth Borne.

We almost forgot about them. There was also Laura Fessel, Minister of Sports, who resigned “for personal reasons” no doubt linked to her husband’s tax situation. She was replaced by a real sportswoman, Roxana Maracineaunu, ex-swimming world champion.
There was also the unexpected departure of Gérard Collomb, Minister of the Interior and heavyweight in the government who, in October 2018, preferred to leave Place Beauvau to take over his Lyon town hall. He was replaced by Christophe Castaner.
Gérard Collomb’s departure provoked a mini-remanagement. Françoise Nyssen is replaced by Franck Riester for Culture, Stéphane Travert leaves the Ministry of Agriculture in favour of Didier Guillaume, the Minister for Territorial Cohesion Jacques Mézard leaves his portfolio to Jacqueline Gourault, and finally Delphine Gény-Stephann, the Secretary of State to the Minister of the Economy and Finance is replaced by Agnès Pannier Runacher.
Benjamin Griveaux, government spokesman is replaced by Sibeth Ndiaye and Mounir Mahjoubi, Secretary of State for Digital is replaced by Cédric O. Griveaux and Mahjoubi wanted to try their luck at the Paris City Hall. Miscalculation.
How many departures and replacements? Many and probably too many in less than three years. At this rate, there will soon be no more substitutes on the bench. And more people to replace the substitutes.