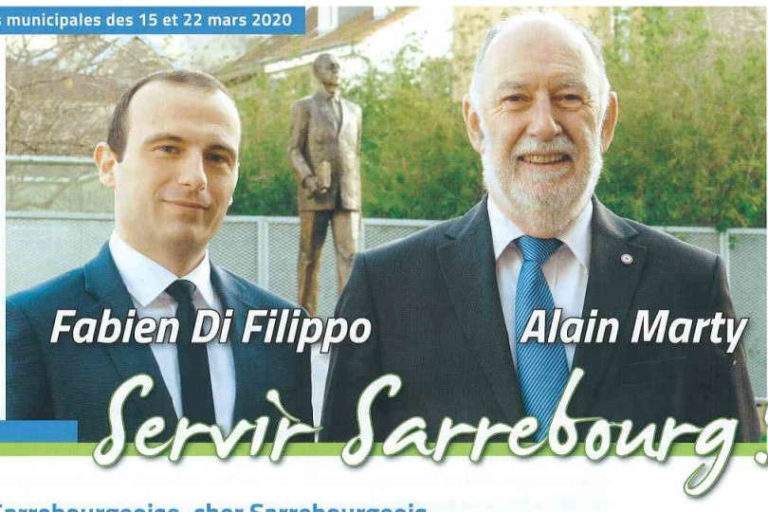 Alain Marty runs for a sixth term in Sarrebourg (57)

Already seven lists in the race for mayor, including three on the right. That of the outgoing mayor, Alain Marty (LR), his former deputy, Jean-Marc Weber (DVD) and Catherine Vierling (LR) regional councillor. It’s going to bleed!

Sarrebourg is a charming sub-prefecture of the Moselle with 12,000 inhabitants. A small town in the countryside, located not far from the Vosges mountains, the town has been listed on the right since Pierre Messmer, Prime Minister UDR then RPR, under Georges Pompidou was mayor between 1971 and 1989. Then it was Alain Marty (RPR then LR), a gynaecological doctor, who succeeded him after 12 years as his deputy. That is a total of 43 years of municipal life for the outgoing mayor.
At 74 years of age, the latter is reappointed for a sixth term. At his side is Fabien Di Filippo, a local deputy and municipal councillor. The list, entitled “Serving Sarrebourg”, aims to “complete the redevelopment of the station”, “ensure the safety of Sarrebourg residents”, “create a green city” and “maintain rigorous management”. It is a wide-ranging programme.
Alain Marty is therefore the man to beat.

“I’ve decided to succeed him.”

He will be countered first by one of his deputies, also a doctor, Jean-Marc Weber, 61 years old, who has never made any secret of his intention to take over from the mayor. He has even been preparing for it for a long time: “in 2014 when I joined the city council as deputy, everyone knew that I came to learn,” confides the elected representative to our colleagues of the Lorrain Republican. I was determined to succeed him. “He adds, perfidiously: “It is time to bring new ideas to Sarrebourg”.
Jean-Marc Weber’s list “For Sarrebourg, let’s act together” aims to “meet the needs of our young people, support local businesses and project leaders, attract new inhabitants… that’s what’s at stake in this campaign” he writes on his profession of faith. How can there be any doubt?

But Alain Marty and Jean-Marc Weber will share the right-wing votes with another candidate from their own camp, also a doctor: Catherine Vierling, 58 years old, regional councillor since 2015, member of the Alsace et Territoires group. She is also a member of the National Council of the Les Républicains party. It’s quite something. Yes, I have strong convictions,” she writes on her presentation document, “to serve and not to help oneself! “Well, well. Would she know anything?
Catherine Vierling drew up the “I love Sarrebourg” list and introduced some of her running mates, including Fabien Kuhn and Catherine Grosse, who have since resigned to set up their own independent and citizen list. Reason for their departure: “Catherine Vierling is said to have hidden intentions: several of the Vierling list’s agents are in fact submarines of the Republic on the march! »

True or false? The fact is that Catherine Vierling’s advisor until the end of 2019 was a 27-year-old young man, Nicolas Quenouille. An employee of the macronist movement in Strasbourg, he was involved with Alain Fontanel, LREM candidate for mayor of the Alsatian capital. Before running for mayor of Sarrebourg.
His report? The city would be badly managed. “Today, we prefer a management as a good father of the family, he confides to our colleagues of the Republican Lorrain, to the detriment of a more entrepreneurial management. And the city is becoming ankylosis. Hence the need, according to him, to bet “on economic attractiveness”. So on him, of course!

Rather to the right

In the end, there are not three but four lists on the right, since macronists sometimes lean to the left and sometimes to the right. In Sarrebourg, it is rather to the right.
On the right again, but even more to the right obviously, Norbert Degrelle’s RN list. A list that will have to be counted with since in the 2019 European elections Marine Le Pen’s party received 23.83% of the votes. Nearly a quarter of the electorate of Sarrebourg, that’s quite something! The Republic in March and its partners had obtained 21.52% of the votes. The Greens nearly 10%. The other candidates had not passed the 5% mark.
There is still one list left to storm the town hall, that of Dominique Biry, representing the 5-Star Movement and the Patriots and Republicans association. A movement coming from Italy, difficult to define, which is at the same time a mixture of populism, anti-corruption, anti-globalism… In short, anti-system.
Seven lists (for the moment) have launched themselves into the municipal race. But the country air is rather stale. Arguments are sharpened and knives are sharpened in a noxious atmosphere. There’s even talk of embezzlement, panty dropping, betrayal… and even worse. Justice would have been alerted, that is to say. If this keeps up, it’s going to bleed. Fortunately, three doctors are at the top of the list. That’s reassuring.