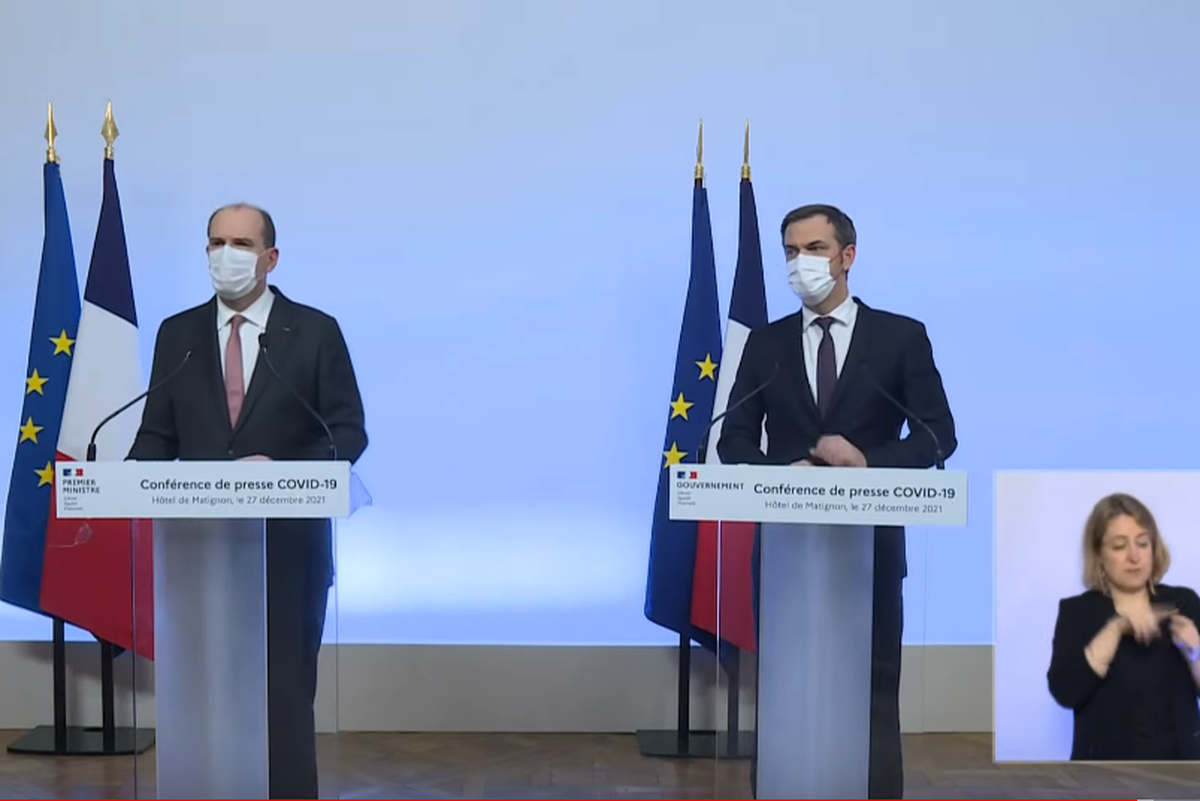 The Prime Minister and the Minister of Health finally announced little to fight the 5ᵉ, or even the 6ᵉ wave, except “an adaptation” of the measures already in force. But they may well change as early as January 5, 2022!

Much ado about nothing. At the end of a new Health Defense Council followed by an extraordinary Council of Ministers, Jean Castex and Olivier Véran came to announce in front of the press the measures aiming at slowing down the coronavirus epidemic which beat contamination records on December 24th with more than 100.000 cases in one day. And which could worsen in the next few days with the Omicron variant carrying a 6th wave that is feared to be devastating.
“We are in a race against time,” said the Prime Minister, pointing out that the number of cases could reach 250,000 per day by the beginning of January. That is why the government is “adapting” the measures to the changing situation.

The Prime Minister has confirmed that there will be no curfew for New Year’s Eve. Just as there will be no extension of the school vacations, the start of the school year is still scheduled for January 3, 22.
On the other hand, a return of the gauges is planned for sports or cultural events (2,000 people indoors, 5,000 outdoors). No more standing concerts, no more standing consumption in bars, no more catering in transport (buses and trains).
But the strongest measure concerns teleworking, which will be compulsory when it is possible to work at least three days a week, starting on January 3, 2022.
Among other measures, the Prime Minister announced the establishment of a state of health emergency on the island of Réunion as it already exists in Martinique.

The non-vaccinated in the crosshairs

Jean Castex recalled that the only way out of the crisis was vaccination. The deadline for obtaining the third dose will be three months instead of four from this Tuesday, December 28, 2021!
A third dose that makes all those who believed that the first and second dose would be sufficient to protect them from the virus cringe.
However, we have to admit, and Jean Castex recognized it, that despite the double vaccination, -even the triple- we could be infected and transmit the virus. Hence this third dose.
Before a fourth? It was Olivier Véran who answered a journalist’s question explaining that it was “a possibility”. He added: “I don’t have a formal answer to give you, I’m just telling you that we are totally open to this prospect…. That question will come in its own time, not now.”
In fact, new, more coercive measures may follow as a new Health Defense Council is scheduled for January 5, 2022.
Happy New Year Covid !