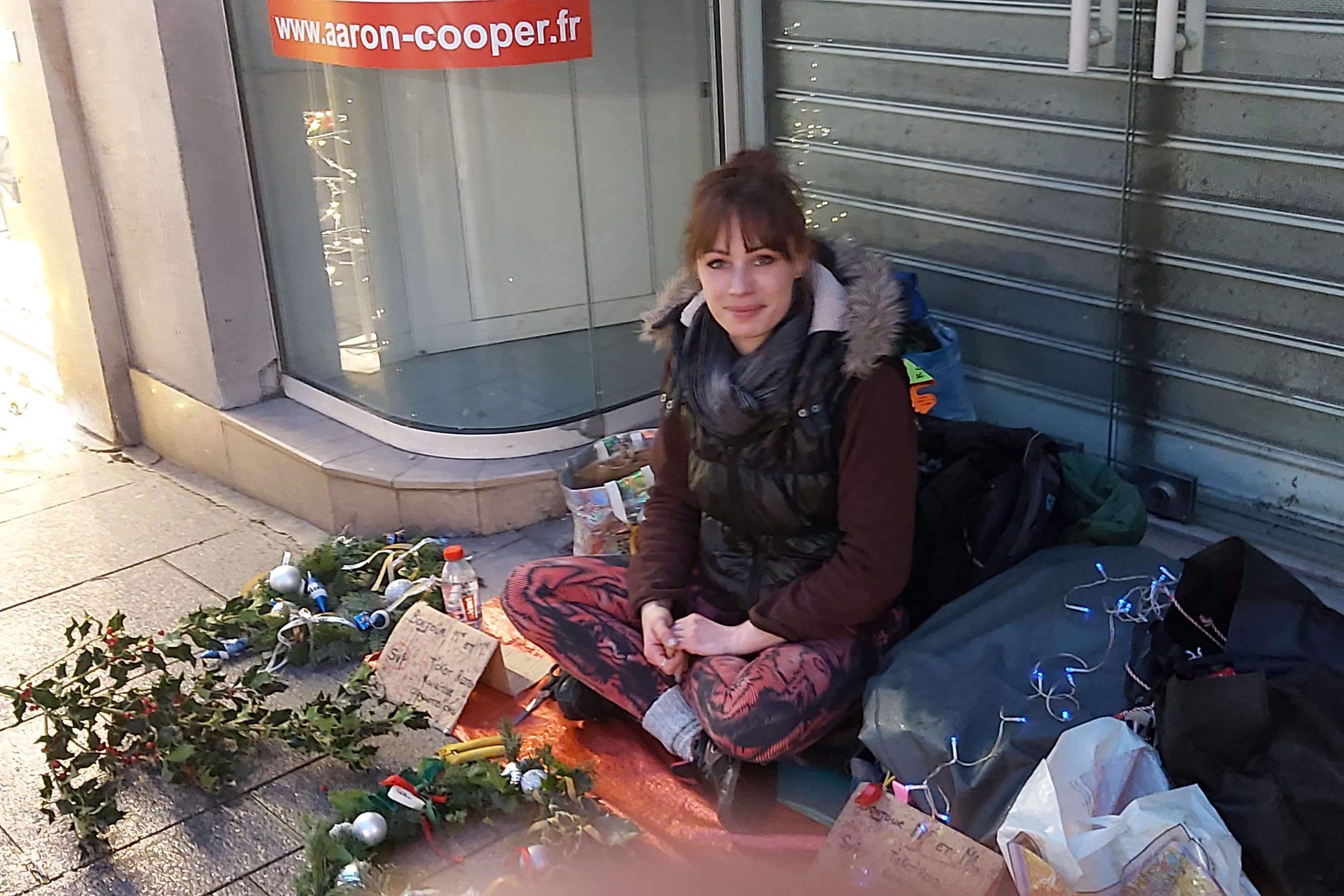 Clementine, a pretty Vosges girl on the street

In Nancy as elsewhere, we see more and more people begging on the pavements. They’re called homeless. One of our readers sent us this post.

Yesterday was Monday. Today it’s gray, it’s cold. Normal in Lorraine in December. I have to go into town to do some shopping and get some money before Christmas. I rarely go into town. Too many cars, too much traffic. But I have to go to the bank near Stan Square. So I’m walking. Half an hour’s walk feels good.
The streets are strangely empty. Probably the strike. On the sidewalks, bicycles and electric scooters slalom between the pedestrians. St. John Street, St. George Street. There are also people sitting or just lying on the sidewalk, a blanket on their legs, a small cardboard pot just in front.
-A room, sir, for eating.
Three meters away, a woman, young and pretty. She set up her things in front of a shop. A branch of holly, a Christmas wreath with garlands, a bag, some clothes. She smiles:
-My name’s Clementine, I’m from the Vosges. -I’m from the Vosges.
A few steps away, Christophe, sitting in a tailor’s shop, has put some small plants and candles around his cup intended to receive coins.
-I’m from Nancy and I’ve come to see my parents for the holidays. But I travel a lot, from town to town. I even go abroad.
A homeless man and his dog, rue Saint-Jean in Nancy (photo DR)

Around the corner, there’s a man standing there with a cane in his hand. Obviously a regular:
-Holidays, one room, I’m not eating today. -No, I’m not.
I suspect some kind of business of misery here. Scoundrel groups exploit poor people to make money.
I arrive in front of the bank. A man, in his thirties, lying down, stretches out his hand, a dog at his side.
The bank is under construction. I’m standing in front of the tellers. People are lining up, thinking that the bankers could greet their customers with a little more consideration.
Now it’s my turn. It’s for a withdrawal. It doesn’t take forever to make a few bucks. Next to me, a small man with no relief comes to make a deposit. He takes out of his pocket a full pogne of different colored bills. I recognize the 10, 20, 50, 100 and even 200 euros.
The small discreet man puts the money back into his coat pocket a second time. A new wad of banknotes comes out. A large packet. But where did he get all this money? Did he rob the local post office or what? Maybe he’s got some girls on Joan of Arc Street and he’s been reading the meters tonight? That’s a mystery. In any case, he’s not on the street.
It’s a machine that counts dough. The banker puts the loot in a drawer. The little man signs a receipt and disappears.
Outside, it’s still cold and gray outside. On the way home I count the number of people begging for money, sitting or lying on the pavement. He has ten of them!
Ten, at 10.30 in the heart of Nancy. I’m ashamed. Shame not to give ten bullets to each one. But my wallet would take a hell of a hit and he’d blame me. I’m ashamed for this fucking society where some people eat like pigs when others are starving.
This afternoon there’s a demonstration in Nancy. The unions opposed to the pension reform promised by Macron will be joined by the yellow jackets, those who can’t make ends meet. Last week, 8,000 of them were shouting their anger in the streets of Nancy. Today, I don’t know yet. But there’s going to be a mess in the streets, with the procession of demonstrators and the cops’ tear gas.
It’s gonna be noon. I’ll get my baguette. In front of the bakery, a young man sits with a bowl in front of him. That’s eleven homeless people.
I ask him what he’s doing sitting there in the cold. The young man is obviously not in good health. He’s all pale. He’s missing teeth.
He tells me his parents are dead, that he’s out on the street, out of work. He’s been in and out of shelters, but he’d like to get by. He wants to be a cook. He’s going to do an internship soon, to learn. But he needs to get better first. He has stomach problems because he eats too much bread, too many sandwiches and not enough hot food. The house doctor told him that. He says:
-A hot dish is 7 euros, with vegetables as much as you like. -A hot dish is 7 euros, with vegetables as much as you like.
-How old are you? -How old are you?
-20 years old! It’s my birthday today, sir.
I held back so as not to scream with anger and shame at the same time. How can we leave all these people on the street? How can we leave these kids dying on a sidewalk right in front of us? At the age of 20… I gave him a nice steak so he could go out for a hot meal.
He thanked me. Then he ran out the door and jumped for joy. It was probably his only birthday present. And maybe his Christmas present, too.