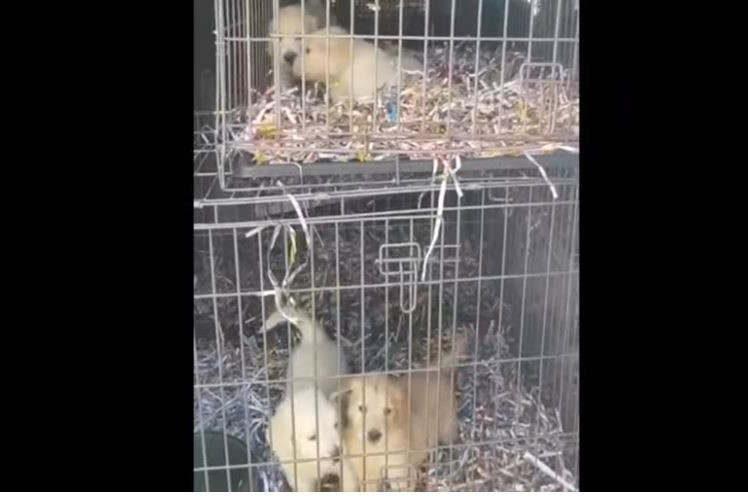 An odious traffic of pedigree puppies is practiced between some Eastern countries, Slovakia in particular, and Spain affirms the SPA of Mulhouse Haute-Alsace which launches a petition.
The customs checked a van with 98 puppies of 2 or 3 months old, this Monday 13 July in the morning, which were taken in charge at the SPA of Mulhouse Haute-Alsace. Many puppies had perished en route and were thrown into the wild by the driver and his teammate. On their arrival at the SPA of Mulhouse Haute-Alsace, the puppies were totally dehydrated and starving.
Unfortunately, at the request of the authorities, the puppies were handed over to the transporter in the late afternoon, while some puppies were in a very precarious state of health. It is likely that many puppies still perished during the transport of more than 1000 km to Spain, especially on a torrid day when the temperature in the van can certainly approach more than 40°, with a relatively random ventilation and without air conditioning.
It is with sadness that the employees of the SPA saw these animals, most of them doomed to death, leave again.
“This carrier alone transfers about a hundred puppies from Slovakia to a pet shop in Spain every fortnight; it is a real traffic in appalling conditions with a frightening mortality” alerts the SPA of Mulhouse which launches a petition on the site change.org. The SPA of Mulhouse Haute-Alsace must alert the public and set up a petition for a less lax French and European regulation.
Other large-scale unidentified trafficking is very likely to take place, as suggested by the customs controls carried out.

COVID : three scientists explain the resurgence of the virus