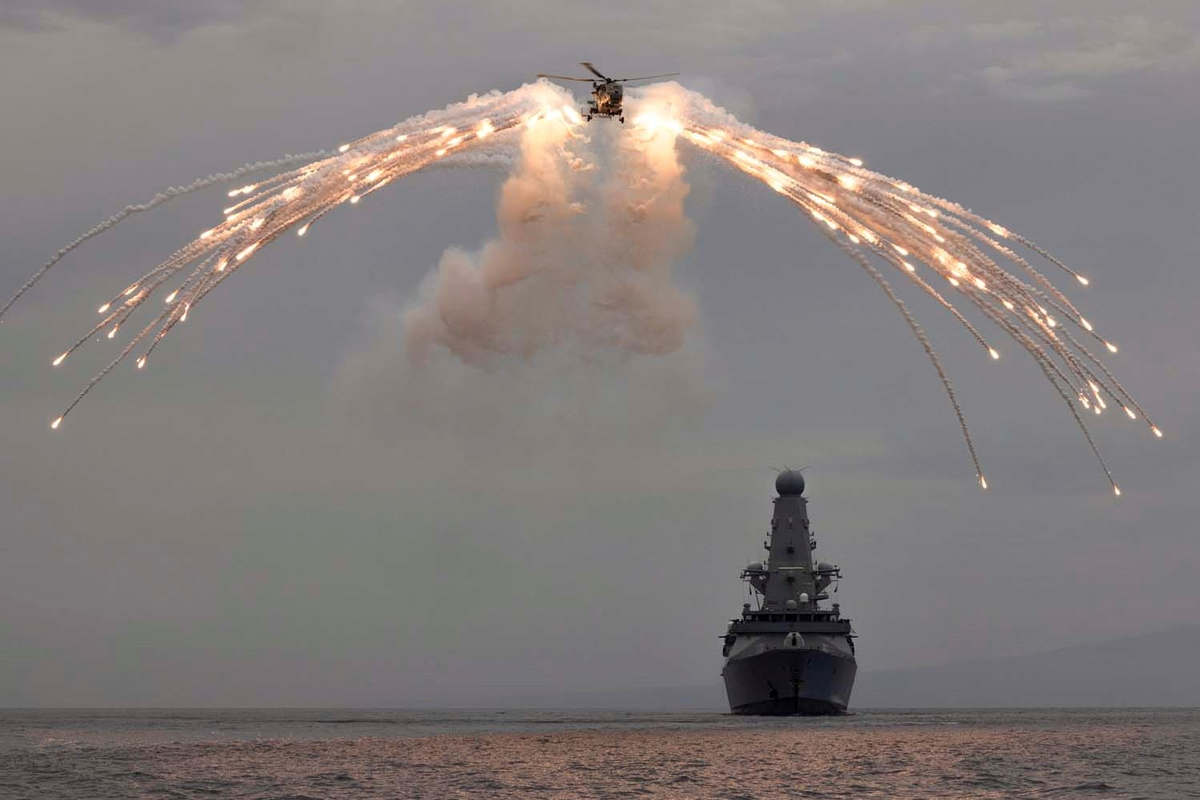 A Russian patrol ship fired warning shots and a jet fighter dropped bombs after the British destroyer HMS Defender crossed Russia’s maritime border in the Black Sea. The UK embassy’s defense attaché has been summoned by officials in Moscow and the Ambassador will be summoned to discuss the affair.

According to Russia’s Ministry of Defense, the British naval ship entered the country’s territorial waters at 11:52am local time and traveled 3km inside the frontier, near Cape Fiolent, in Crimea. The peninsula is not recognized by the United Kingdom as Russian territory. London claims it to be illegally occupied Ukrainian territory.
“At 12:06 and 12:08, a border patrol ship fired warning shots,” the Russian Defense Ministry said. “At 12:19, a Su-24m aircraft performed a warning bombing run ahead of the course of HMS Defender.”
The Russian bomber dropped four high explosive fragmentation bombs as a warning in the British destroyer’s path, according to the Russian ministry.

Shortly before the Defense Ministry publicised the incident, Russia’s top army chief Valery Gerasimov told a Moscow security conference that NATO naval activity near Russia’s borders had “significantly increased”.
“Ships equipped with high-precision long-range missile weapons operate almost on a permanent basis in the Black and Baltic Seas,” he said, calling the actions “clearly provocative.”
HMS Defender is an air-defense destroyer, launched in 2009. Designed primarily for anti-aircraft and anti-missile warfare, it is currently conducting missions in the Black Sea. Before the recent incident, the ship was docked in the Ukrainian port of Odessa, where it played host to a signing ceremony, attended by British Minister for Defence Procurement Jeremy Quin and Deputy Defense Minister of Ukraine Alexander Mironyuk. London and Kiev have agreed that the UK will supply warships to Ukraine, and have agreed to help the country construct Black Sea naval bases.

Following the incident, Britain’s Ministry of Defence denied by tweet that any warning shots were fired at the HMS Defender, claiming that the vessel is conducting “innocent passage through Ukrainian territorial waters in accordance with international law,” and the Russian shots were part of a pre-planned gunnery exercise.
“No shots were directed at HMS Defender and we do not recognize the claim that bombs were dropped in her path,” the tweets said.
However Ukrainian Foreign Minister Dmytro Kuleba contradicted the British version and said the incident showed that Russia’s “aggressive and provocative policies” in the Black Sea and nearby Azov Sea constituted a “continuous threat to Ukraine and its allies”. In a tweet, he called for NATO to cooperate with Ukraine in the Black Sea.
Earlier in the day, Moscow had urged the United States and its NATO allies to stop military operations in the Black Sea region, calling instead for “multilateral efforts” aimed at maintaining stability, and for states in the region to resolve problems without unwanted “help” from outside powers.