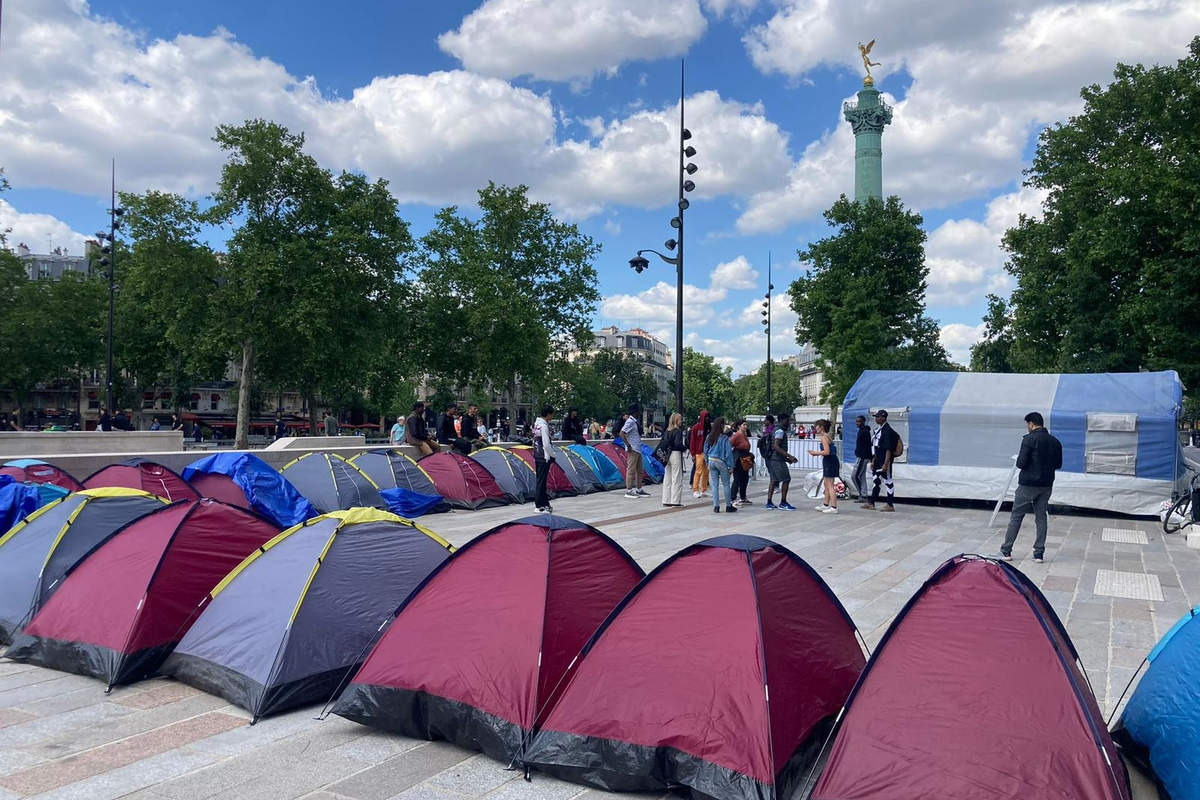 Utopia 56, a migrant aid association, is setting up tents in the middle of Paris alongside thirty or so young people living on the streets to force the government to create a housing facility for young migrants.

Every night, for years, hundreds of young people who have arrived in France without their parents have been sleeping on the street for lack of accommodation,” says the association Utopia 56. For them, girls as well as boys, the State chooses not to recognize their minority. To put an end to the wandering of these young people, everywhere in France, we are asking for the creation of appropriate support and accommodation structures.
And, to make themselves heard, the migrant aid association has decided, as of this Saturday, May 28, 2022, to set up tents at the Place de la Bastille, in Paris, alongside some thirty young people currently on the street.

Every day, volunteers from Utopia 56 take turns in front of the minority assessment device (Demie) at the Couronnes metro station in Paris to guide those who are “turned away,” adds Utopia 56. These facilities exist in each department, sometimes managed by mandated associations such as the Red Cross or France Terre d’asile, sometimes by the State and the child welfare services.
They come from Mali, Bangladesh, Ivory Coast, Afghanistan and elsewhere. They have crossed, often alone, the Sahara, Libya, the Mediterranean, sometimes for years, before arriving in France with the hope of being able to study and grow up freely. These are already traumatic journeys, to which is added the violence of the reception: “Your statements about your family are insufficient to allow us to link them to the age you declare. Justification often put forward by the evaluation system. Adama was finally recognized as a minor 9 months later, after having spent all that time on the street.
Along with numerous associations throughout France, Utopia 56 is mobilized on a daily basis to help them and initiate an appeal procedure before the children’s judge in order to establish their minority. Among the young people accompanied by Utopia 56 in Paris, approximately 65% were finally recognized as minors in 2021 after having already spent several months on the street. In 2021, in our 8 branches in France, Utopia 56 teams accompanied more than 500 young people.

“The French state builds its policy of migratory dissuasion around the passage through the street. It abandons and mistreats these children on a daily basis, with the sadistic hope of sending a message,” says Pierre Mathurin, coordinator of Utopia 56 Paris.
Added to this street reality is the loneliness and harassment that these young people face on a daily basis. In Paris, an anti-camping policy, initiated by the police prefect Didier Lallement, pushes these young people to wander every night, in search of a space where they can set up their tent without being evicted.
Following a referral from 5 organizations, including Utopia 56, to the UN Committee on the Rights of the Child, an investigation was opened. Its purpose is to establish the reality of the treatment of unaccompanied minors by France, which has already been condemned several times by the European Court of Human Rights for its failings.

The presumption of minority

Place de la Bastille, Utopia 56 demands accommodation and social support for all of these young people, recognition and respect for the presumption of minority, the best interests of the child and the right to effective recourse, throughout France, until a decision to the contrary is made by the children’s judge. In 2017, Emmanuel Macron had promised an end to the street and wandering, this reality is now playing out.
After two refusals from the Paris Police Prefecture, the association was finally able, by means of an appeal to the administrative court, to set up this device to carry the voice of these young people left homeless by the State.