Kepler 452B and the Earth (Gaia) Wikipedia

Our planet Earth, Gaia in Greek, considered as a living being, regularly corresponds with another planet in the universe, Aurora Kepler 452 B in the constellation of the Swan. Gilles Voydeville makes us discover this magnificent interstellar correspondence.

Month of the Wriggling Acras on Kepler

Ah, adored sister, how difficult the life of your Charmings seems!

I prefer to think of my nascent dawns. The slow blossoming of the light of my star reveals there the softness of my valleys and then of a blow makes burst out of darkness the immensity of my plains. My animals wake up and come out of the bushes to go graze in the clearings. My birds snort, chirp and fly in arabesques that make my nature quiver. This beauty is enough for me and makes me happy.

But being a planet has duties that dreaming does not fulfill.

I will have to solve a recent controversy. It is close to those of which your Charmings are accustomed: the ovoid females decided to rebel. They demand a right of refusal. If there are lawyers on Kepler, they were doing very little work. This will change because the phenomenon is global. This protest is spreading with the speed of the lightning that crosses my sky on stormy days. The ovoid females have only this simple and complex concern left: they have decided to pass a law that will allow them not to be jumped in the pocket without their express agreement.

The inhabitants of the Rising Sun

Some time ago, the females had let it happen when the Great Ovoid Council had decided to use their back pockets to deposit beads. It was to count the drafts of their foals. These would die if the number of drafts exceeded twenty seven per month. Thus, with each step, the pearls rustled with mother-of-pearl, embalmed with iodine and gave amber reflections to their gap. The Association of Ovoid Females (AFO) had agreed because, without really admitting it, it served as contraception and above all it prevented the males from relieving their need whenever they wanted. The place was taken, a bit like if at home the charming party room had been occupied by a calculator. This reduced the strain on the ovoid females who were not too sexually inclined. And it satisfied others who never admitted it, as Geisha balls satisfy your inhabitants of the Rising Sun. The number of coitus decreased. That regulated the births and solved the problems of nutrition of the species.

My Ovoids like your Charmings live in couple. Until now, when the male wanted to fornicate, if the pocket was not occupied by these cursed pearls, he would jump into the pocket of his female. Well, that’s over. And males have now understood that the use of the genital pouch for accounting purposes is a hidden sexual revolution.

So from now on, females require to be informed and consenting. This is a revolution. Even from their husbands, they refuse the antics without their knowledge, on the fly, behind their backs, without real consent. It is the advent of the primacy of the individual over the race. This female behavior will inevitably reduce the number of births and could therefore in the long term threaten the supremacy, or even the survival of the Ovoids. If the females win in court, they will be able to decide the future of the Ovoid population on my planet. If predators appear, this behavior could threaten them with extinction. But for the moment the race is flourishing. Remember my dear Gaia that on your earth, the condemnation of rape, incest, birth control are only recent achievements, which occurred long after the threat of the survival of the Charming ones was extinguished.

This strange desire for strawberries

In your Paleolithic era, mating was quickly recognized as a generator of pregnancy and it is likely that the notion of sexual constraint did not exist. The males fornicated with the females as soon as they bent down to pick wild berries. This probably explains this strange desire for strawberries during pregnancy, which associates the tasting of the fruit with the pleasures of conception…
In your well-built Neanderthal, well endowed with male hormones – the phalanges of the ring finger are longer than those of the index finger, Manning’s test – mating was frequent and depended on encounters. It was polygamy with four coitus per day, not always with the same one so as not to tire… Moreover, Neandertal did not work much, except for hunting. He had time to dream, to desire. Idleness is an aphrodisiac, as your Kinsey will prove in his reports on the sexual behavior of the charming American social categories.
To make great tribes, active males were needed. This quality produced numerous offspring. Your charming little humanoid thus ended up supplanting ferocious animals because the moods of the females were not taken into account.

They were there to procreate. Thus the charming race ended up imposing itself on the other races by its intelligence but especially by its number.

In your recent history, remember that your nobles came before their vassals between the thighs of the bride. The deflowering of the daisy was a legal rape committed by a seasoned lord that could only improve the race and allow the virgin to boast of a noble offspring, while sparing the virgin a difficult first passage…
Now that the charming breed seems to be saved – which is less certain with the appearance of your new little viruses – just like mine, your charming females decide on their sex life. While the males have kept the appetite that allowed their hegemony. While for millions of years they have accepted the boorish ways, they now have their say: NO. Because the survival of their species is no longer threatened by their refusal.

So it is only when your charming flock of peoples felt safe from extinction, that they started to consider the claims of their parts. When the race seems to be saved, one can worry about the individuals who compose it. The very ones who may have been sacrificed in the saving emergency. Ethics come after safeguarding. First protect the people, and only take into consideration the desires of its components when it is saved.

But when special interests overwhelm the general interest, what will happen?

Well, I think that it is the people who will take over. Insidiously, by apparently respecting the law and democracy, but by electing populists who flatter them, but above all who will give them preference. Thus, if through the game of law and democracy previously aggrieved individuals can make their recriminations heard and obtain reparations, or even advantages that will in fact threaten the people, it is the latter who will regain control. And this, in general, under the rule of a tyrant who will be elected, or accepted, because he will have integrated the new global benefit and will be able to allow himself to repress the particular interests in spite of the law.

Remember, in the United States, your African-Americans were sacrificed to slavery to enrich the country and thus drive the British off the continent. As the country’s wealth was established, the game of law and democracy granted them freedom, the opportunity to get an education and to sit next to the whites… But when the African-Americans managed, thanks to Obama Care, to get health care like white people, it was too much for the white people who elected a populist leader who turned out to be a tyrant for the black minority and encouraged police abuses against them.

Look at the evolution of an illiberal Eastern European democracy like Hungary. It was under the Soviet yoke from the end of World War II until the collapse of the Soviet empire. Then it freed itself and became a democracy. As it remains in the Soviet orbit, this democracy has become a provocation for Russia. The Hungarian people have retained the trappings of democracy, but they have regained control of the law by installing a populist leader who seems to constrain them, but in truth protects them from too much Russian interference.

Populism is the way the people have found to give back the primacy to the people over the individual interests that law and democracy had favored.

Some of your Western European Charmings still believe in the primacy of the individual. But it is not certain that the coming elections will not bring to power, in the name of the people, leaders who will regress the individual rights and the liberties of minorities, including the desiderata of females…
So in my case, the maturity of the ovoid race and the absence of threat of extinction, makes the female individual take over. Resounding lawsuits launched by the AFO will set a precedent and it is a safe bet that as long as there is no predator worthy of the name, we will see femellinism flourish here on Kepler. Forget the viruses and the famous Big Five! There are still the Transparents; I’ve already told you about them. Bigger than the Ovoids and more devious, because they commit their misdeeds and disappear by possessing a system of absorption of light photons and emission of the visual copy of their environment. So they can become invisible when they want to. They are equipped with a stinger to pierce and suck the udders of the pouloids. But they also use it to pierce the shell of the Ovoids and feed on their plasma. As long as there are not too many of them, it will be ok. But if their fertility surpasses that of the Ovoids, on the occasion of new societal behaviors, the situation may change. And at that time, there will always be time to have populists sit on the Great Ovoid Council.

The messengers of their Gods

Ah, my dear Gaia, is there a truth, an intangible dogma that will always seem good throughout time? I know that among your charming little beings, the fights for the good right rage. Often they allow those who think they know the truth to win. Because they are doped by this belief in this impalpable supra-natural element – the Truth – which makes them the messengers of their gods or of your nature. A little reflection and study of history would allow them to put their certainties into perspective.

My beloved sister, my twin, I am sending you this missive quickly because I am anxious for you to answer me to talk about many things. And especially about the variants of your tiara crowns. There is such an analogy between our viruses that your stories may allow me to anticipate or foment a pandemic.

My Gaia, I love you more than myself. You are my only friend, my twin. You were born from the Universe as the azure argus is born from a chrysalis. You became this blue planet of which your galaxy is proud. I embrace you with a thousand ribbons of aurora borealis, you, my sister, whose distance I deplore, which is increasing a little more each day; you who are such a pleasant match for me, but whose children I may never see.

Aurore, your sister who adores you. 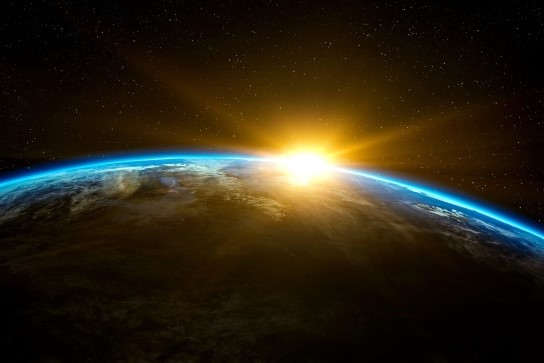