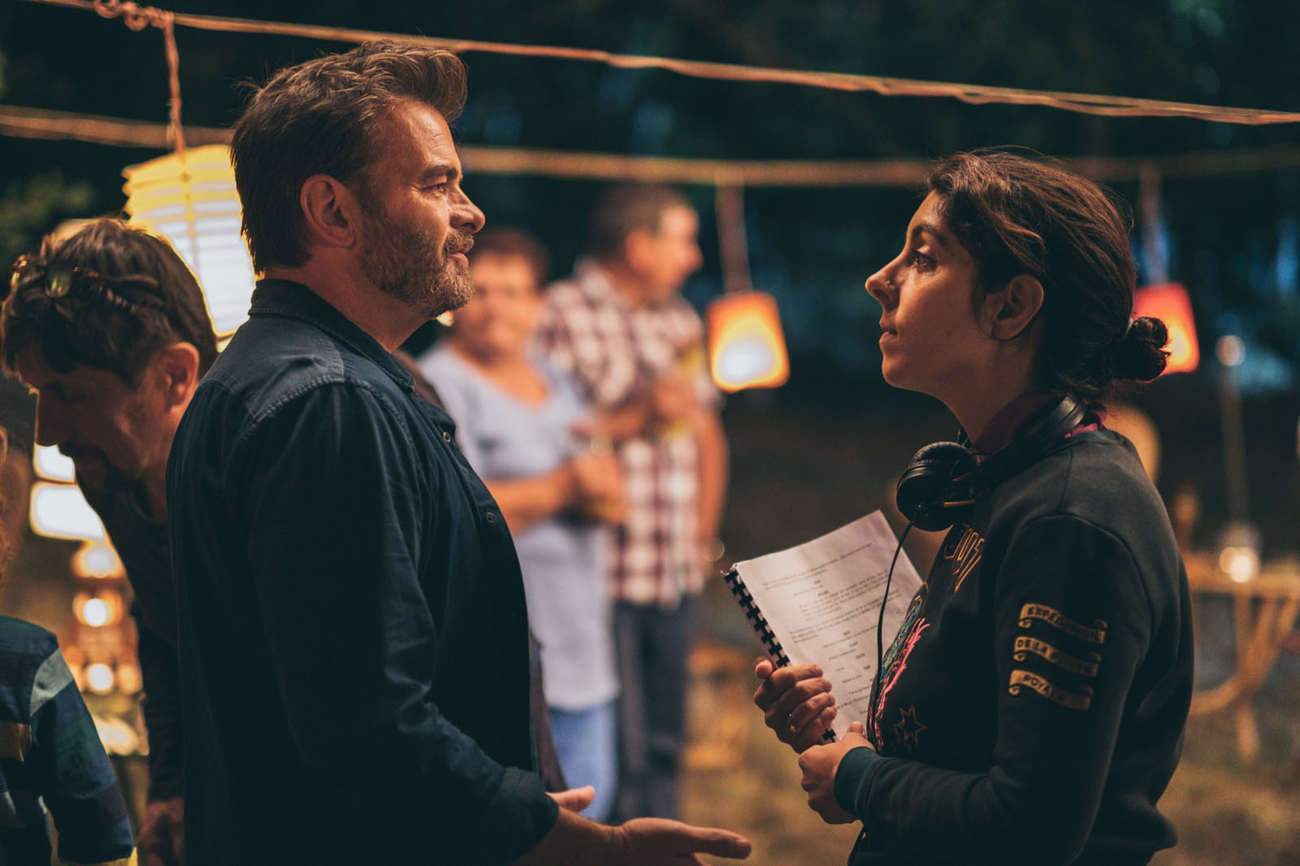 Julie Manoukian with Clovis Cornillac on the set. "Like a lot of little girls, I had dreamed of being a veterinarian for a short time," says the director.

“It’s a subject that has never been tackled,” says Clovis Cornillac, who plays a veterinarian in this charming country fable by Julie Manoukian.

Michel Jonasz plays one of the “Vétos” in Julie Manoukian’s film (released on January 1, 2020), but disappears very quickly after the first sequences. This veterinarian is about to take a well-deserved retirement, which worries his partner Nico, played by Clovis Cornillac, already overwhelmed. But Michel has planned everything, he has found his replacement: his “Pâquerette”, his niece Alex, played by Noémie Schmidt, who has just finished her veterinary studies, and is going to take a research position in a Parisian laboratory.

Except that Alex has no plans to return to the village of her childhood, in the Morvan. “My life is not here,” says the young lady, who has no desire to spend the summer in the cows’ asses. Especially since, considered as a Parisian, she is not necessarily well received, the beginnings are chaotic, the learning process difficult, and the machos not nice. “The first a priori of a breeder when he sees a young woman arriving is not necessarily easy, but they make their place and we trust them”, assures Julie Manoukian (André’s daughter).

For her first feature film as a director, she was very keen on Cornillac in the role of Nico: “It was Clovis or no one, it had to be him”. As for Noémie Schmidt, the young actress has invested herself to the point of calving, and naturally plays this tiny young lady who will finally prove herself, taming the villagers, like this fox approaching the house.

“Les Vétos” is thus a friendly country fable, a sweet comedy, simple cinema, which evokes transmission, and in which some animals (rat, fox, cow, dog…) almost play second roles. “In fact, it happened more easily than I had doubted,” says the director. “We always say in cinema that you shouldn’t work with children and animals, in fact you should work with the good trainer, Muriel Bec. Muriel got me involved in the film before shooting, and we had done a lot of work beforehand so as not to write things that would be impossible to shoot”.

Meeting with Clovis Cornillac and director Julie Manoukian, during the preview of the film at the UGC Nancy.

This veterinarian that you play is a character like you like them, earthy, solid, that’s what made you accept this film?

Clovis Cornillac : I like them, that’s for sure, but there’s no calculation on my part. From time to time, it turns out that they are worlds that touch me or speak to me, and then probably there is something about me that makes it seem, for directors, coherent, I have to bring out something that has more to do with it than a 17th century aristocrat. The first thing that struck me was the title, it immediately sparked something, it was a subject that was never addressed, it seemed so obvious afterwards. The script really resembled the film, at the same time there were some serious things and this very soft aspect, very at human level, I think that people will recognize themselves and appropriate it, we make films to share them with the greatest number of people.

For this role, did you learn the gestures of the veterinarian?

It’s the work we do on the jobs we’re going to tackle, we try to meet the professionals, work with them, try to understand how it works, we followed Noémie and I from the vets who guided us throughout the film. The idea is not to betray the profession, besides the film is called “Les Vétos”, the function in the film is very important. And it’s one of the great joys of our profession to be able to approach a thousand professions, and therefore to meet people.

You can feel your passionate character, over-involved in his everyday actions…

Vets, especially in the countryside, are necessarily 200% invested, they are few, they have large territories, and you know you don’t make a lot of money, it’s really linked to a profession of faith. They’re helpful 24 hours a day, all year round. In addition to taking care of animals, they take care of people in a certain way because the relationship between humans and animals is very strong, with those who make a living from them, such as breeders, or lonely people in the countryside, the only one who makes the social connection is the veterinarian. One of the things that struck me, which I had not really thought about, is that for all of us they are the first line of defence against epidemics.

“The animal is a vacuum cleaner of emotions.”

The film also shows how difficult it is sometimes to live in the countryside, especially in a landlocked area like the Morvan, everything is far away?

Everything is far because everything is gone. Typically, the Morvan, the Gers or the Vosges, everything is far away because everyone leaves, it’s the infernal circle of desertification. I am very optimistic by nature, and I think that there will be a return, which will not come by land, but by city dwellers, with teleworking, the price of real estate in cities, the quality of life, the principle also of having several jobs in one life, not to mention ecology and all these things that we have become aware of. I think that there is a desire to live better, with the land, with animals, it will inevitably reopen schools, bring back doctors… The Morvan, the Gers, the Vosges, the Larzac, these are wonderful territories, it’s crazy that we don’t live there.

How did the filming go with the animals?

I’ve made quite a few films with animals, I don’t have any problems with them, I like them. The only thing that’s certain is that the take that will be good for the animal, you’d better be good because that’s the one that will be edited. You’re not going to do another take because you weren’t good and the animal was perfect, you’ll never get it twice, it’s part of the deal to play with animals, it’s pretty cool. The audience only looks at the animal, it’s a vacuum cleaner of emotions, the idea is rather to accompany it, and that the scene tells what has to be told.

As a director, you are going to make the adaptation of ” Couleurs de l’incendie “, the novel by Pierre Lemaître?

Absolutely. First of all, I’m going to finish my next feature film, “C’est magnifique”, which is being edited, I have quite a few special effects in it so it’s going to be a bit long to come out. It’s an original comedy that deals with the quest for identity, but a little offbeat, a little offbeat. I’m a fan of Lemaître, I love his literature, so when I was asked to direct the film, it obviously speaks to me, I hope a great epic, historical and popular cinema.

Julie Manoukian: “We wanted to pay tribute to this profession.”

After “Petit paysan”, “Au nom de la Terre”, and now your film, “Les Vétos”, we have the impression that French cinema is rediscovering the French countryside?

Julie Manoukian : ” Petit paysan “, we are not in the same category, it’s really an auteur film whereas we are a little more popular, a little more mainstream; we didn’t even know it existed when we started thinking about this story. On the other hand, it’s disturbing to come after “In the Name of the Earth” and to see how there’s a call for these stories that I hadn’t anticipated. I was the first surprise, that’s not why I wrote this film. We’re all very happy that a much darker film than ours is calling people, despite the harsher subject matter.

Geographically, why did you choose the Morvan to shoot this story?

We needed an idyllic corner of nature, we were pretty sure we would find the exteriors we wanted in the Natural Park and that was the case, then we had to find the right village, and when we found Mhère, the village we visited last, we decided to put our luggage down there.

How did you come up with this idea for a script?

Like a lot of little girls, I had dreamed of being a veterinarian for a short time, being very far from the reality that I discovered while preparing the film, it’s a dream job for a lot of children. I came to cinema through writing, I met the producer Yves Marmion on another project, and three years ago he suggested this subject to me. There was only one backdrop on which to find a story, and I fell in love with what I discovered. There are a lot of vetos who write very well about their profession, I found the same thing as with doctors, passion, dedication, difficult working conditions, humour, and from there the story was written quite quickly.

Indeed, there is a comedy part, while the context is quite difficult…

Yes, the harshness of this profession, vetoes give life and death, it had to exist because we wanted to pay tribute to this profession; at the same time, for me, it was very important to make a comedy and to offer a little moment of joy, simply because I need it and apparently I’m not the only one.

” Les Vétos “, a film by Julie Manoukian, starring Clovis Cornillac and Noémie Schmidt (to be released on January 1, 2020).