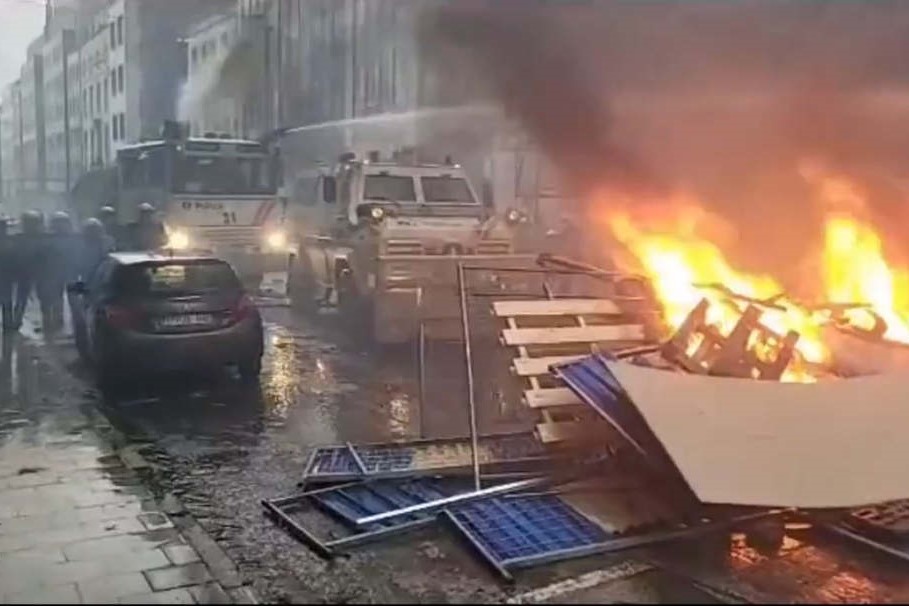 As in Austria, Australia and Guadeloupe, demonstrations shook the Belgian and Danish capitals on Saturday and Sunday.
As in Austria, Australia, the Netherlands and Guadeloupe, demonstrations continued on Saturday and Sunday in the Belgian and Danish capitals.
The sanitary restrictions imposed in many countries to try to curb the pandemic are less and less accepted by a fringe of the population.
We have seen this recently in Austria, Australia, the Netherlands and especially in Guadeloupe where violent clashes between demonstrators and police forces.
On Saturday evening, some 1200 people demonstrated in the streets of Copenhagen, Denmark, in the name of “freedom”. No injuries, apparently, no major damage, but a dozen arrests. New demonstrations took place on Saturday in The Hague, in the Netherlands, after the riots in Rotterdam the day before.

In the Belgian capital, this Sunday, between 35 and 40.000 people gathered in the name of freedom, hindered, according to them, by the anti-Covid restrictions imposed by the authorities. They are protesting against the health pass and against the mandatory vaccination of certain professions with the slogan “Enough”!
At the beginning of the afternoon, while the parade followed a route marked out in advance, some individuals wanted to deviate by arriving at the crossroads formed by the Avenue of Arts and the street Joseph II. It is then that there were some clashes with the police. Fireworks and mortars against tear gas and water cannons.
But soon after, the main part of the procession arrived in rue de la Loi, in the very heart of the European institutions where the speeches were planned. This is where the clashes took place (see video below).

The GIGN and the RAID in Guadeloupe

Despite the dispatch of two hundred additional police officers and gendarmes with the reinforcement of the RAID and the GIGN, the situation remains tense in Guadeloupe. Roadblocks, vehicle fires and store looting have continued in recent hours. Several dozen arrests have not calmed the rioters, on the contrary.
The unlimited general strike against the health pass decreed on Monday and the bad living conditions on the island since too long feed the hatred and the desire to fight with the authorities.